Destinations / The Best Places to Visit in Las Vegas, USA / The Chapel of Flowers

The Chapel of Flowers


Each of us remembers a lot of bright moments from the movies, where guys and girls, after a crazy night at the casino surprise themselves and go to get married - so, for fun and for the satisfaction of a moment of spiritual impulse.

But a wedding in Las Vegas is not always careless and reckless. Insanity is just replaced by romance, but a rather frivolous marriage ceremony is quite possible to spend an incredibly beautiful wedding, shrouded in mystery and exoticism. One of the main reasons why millions of tourists come every year in Las Vegas and at the same time, one of the reasons why the city is so famous all across the world is that this is the place to formalize marriages (which are legal! ) every day. Moreover, the Chapel of Flowers is one of the most famous places where couples can crown. You simply cannot endure to get back home after a vacation in Las Vegas or even those who have planned to do the wedding here.

The Chapel of Flowers is now one of the most technologically advanced, which enables couples to marry even by Skype. To go to Las Vegas is never too late. But it is better to coincide this wonderful city with a wonderful event in life , for a wedding. Getting married in the capital of gambling is much more interesting than the usual domestic city registry office where all the walls are impregnated with formality and affectedness. In Las Vegas, until recently, marriages were recorded in the City Hall clock, now this rule changed and who wants to get married will have to wait until dawn. A wedding in Las Vegas is not possible only from midnight to 8:00 am. This period can be quite interesting to spend time in recreational facilities, make a couple of bets in the casino. What if you're lucky enough to win a million for your wedding? Contrary to the popular belief, the majority of marriages in Las Vegas, were concluded during the day and not at night. And mostly married consciously. Just people come to Vegas to spend an unforgettable time and then get married, because Las Vegas is a very beautiful city, bright and positive. Every day about 500 couples are getting married. It is said that couples often come to marry just because of the gaming table, close-winged win. But this does not mean that such a wedding in Las Vegas was not planned. As for the wedding, the chapel in Las Vegas is pleased to have married, even at night. If you wanted to get married after midnight and celebrate this great event with bottles of champagne on the lighted streets of Vegas, is real. Organizing a wedding Industry weddings in Las Vegas is well developed, so the newlyweds cannot worry about the wedding banquet , recreation and dresses. Virtually every city hotel rooms can be rented for honeymooners luxury, but here you can visit the beauty salon. Choose a wedding dress, if you did not bring it with you, too, can just be about what you dreamed. Organizing a wedding in Vegas in general is much easier than any other city in the world. Still, it is the capital of weddings, and this status obliges the newlyweds to provide better conditions for the wedding. Want to get married in 2:00 at night? Please! Would you like to spend your wedding night in the presidential suite? All is at your service! Limousines, cakes, dancers and festive show is also included. Going to a wedding in this city, you can solve all the organizational issues, even on the phone. It is common practice that was invented specifically for foreign nationals who come to weddings in Las Vegas .

You can also pre-plan your honeymoon and other entertainment, so as not to waste precious time in America. Your wedding can take place in the most popular Vegas chapel in the city center. Its stained glass windows are decorated with colored glass and stone arches. There you go at this limo to return to the luxury hotel in the status of husband and wife. You will certainly feel the bold and unpredictable heroes of the American lyric comedy and the most incredible dreams about your wedding in Las Vegas can become a reality. Well, if you want all the friends and relatives witnessed the wedding of your unusual, then fix the problem by using a video link. Even the distance over the ocean does not prevent you to share your happiness with your loved ones.

Write your Review on The Chapel of Flowers and become the best user of Bestourism.com

Maps of The Chapel of Flowers 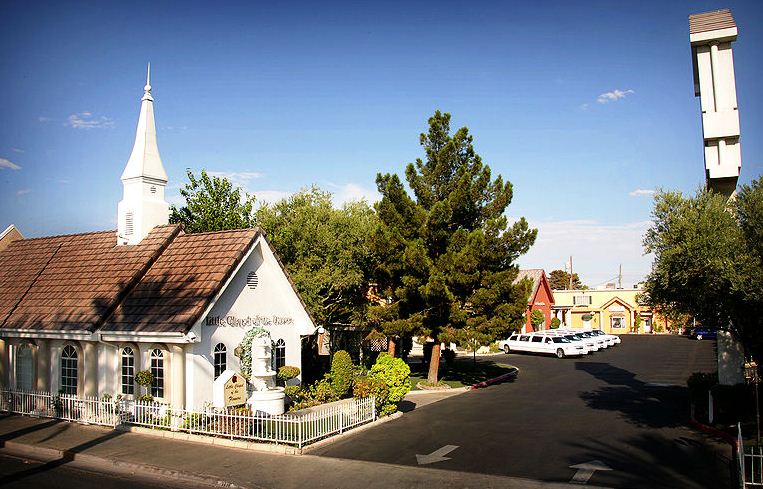 The Chapel of Flowers - Romantic place

Video The Chapel of Flowers