World Tourism / The Most Impressive Geysers on the Earth / The Fly Geyser, Nevada, U.S.A.

There are many places on the planet that can easily be classified as miracles. The creations of nature are unmatched, and the most bizarre of them became attractions. The Fly Geyser is surely, one of them. At first it may seem that this geyser is not real, or it is just a footage of some ski-fi movie. But this is real, although it is not very well- known, as it belongs to a private property, the owner is trying not to let strangers. He hedged the entire territory with a fence. But some brave souls are still climbing over the fence to take some photos.

The Fly Geyser , also known as the Fly Ranch Geyser , is a small geyser , which is about 32 km north of Gerlach-Empire , in Washoe County , in Nevada . The geyser is located in the valley of Hualapai Flat ( Black Rock Desert ) near the Nevada State Route 34 . Driving along Route 34, the Fly Geyser can be seen directly from the road.

The Fly Geyser, means soaring geyser and it is an amazing geothermal geyser. In 1914, in the place where the geyser now is, some guys drilled rigs. Those men reached to an underground lake, tried the water’s taste, they saw that it did not look like oil and cleared out over the horizon with their drills and left the hole itself, mothballed. This geyser called the Fly Geyser is owned by Todd Jaksick. Many tried to buy this geyser from him and make it public, but Todd did not sell. This geyser is not an entirely natural phenomenon. This geyser is growing due to the minerals, produced on the surface by the water and now its height is of 1.5 meters.

The road to the geyser is a mess of mud. To get to the geyser itself by car is not possible: on the way you will get to a fence with a gate, which is confined to a few castles. The desperate fans of extreme and photographers wishing to get a good shot, climb over the fence. The Fly Geyser is not a natural creation, but a result of human activity. In the 60's under the ground a variety of reactions began, which caused the heating of the water and the active dissolution of salts, which in turn led to the formation of hills around the well. The growth continues around the walls of the geyser today. The height of the jet is now up to 1.5 meters. The color of the geyser is given by the sulfur dioxide and other minerals dissolved in water.

Besides the Fly Geyser in Nevada, there are two similar geysers created by man, but their sizes are much smaller. Visit the Fly Geyser and enjoy a unique fascinating phenomenon and a spectacular creation. This is a destination worth visiting in your life.

Write your Review on The Fly Geyser, Nevada, U.S.A. and become the best user of Bestourism.com 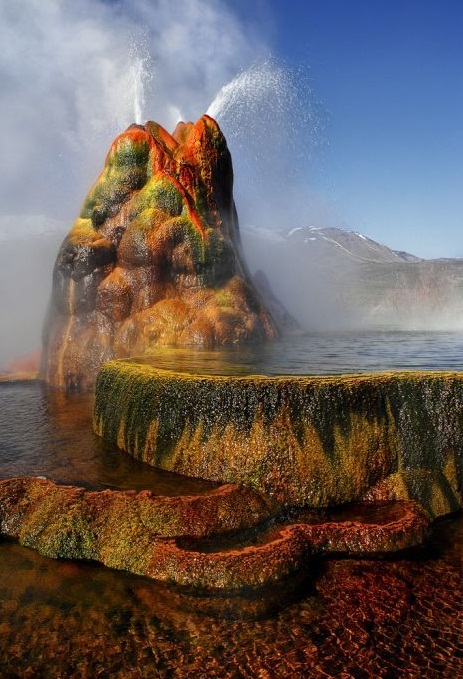 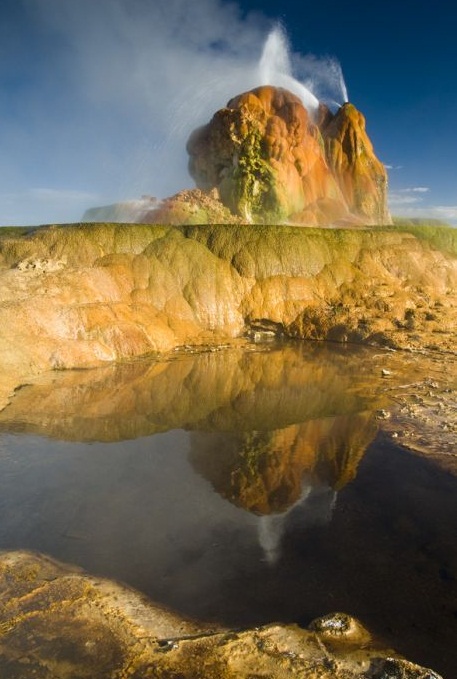 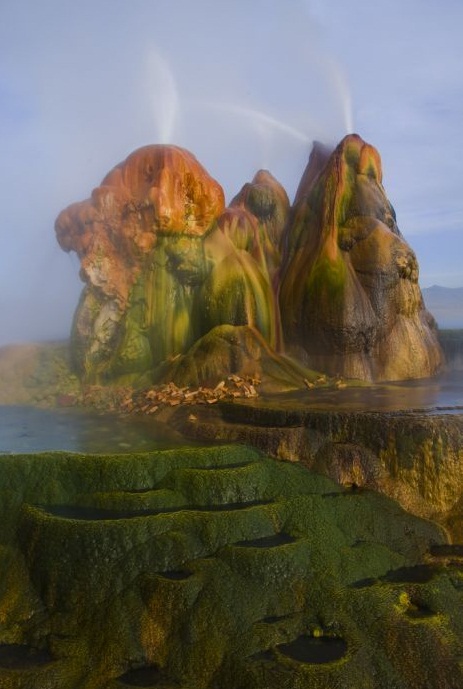 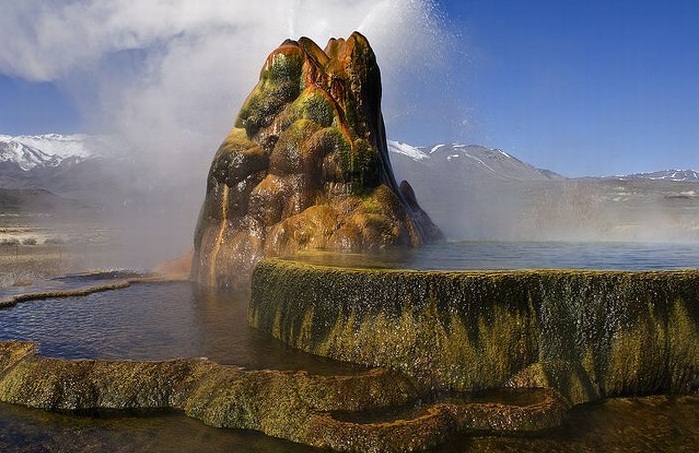 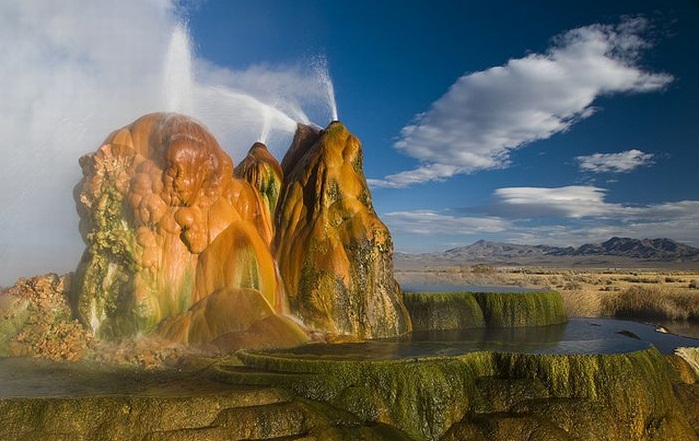 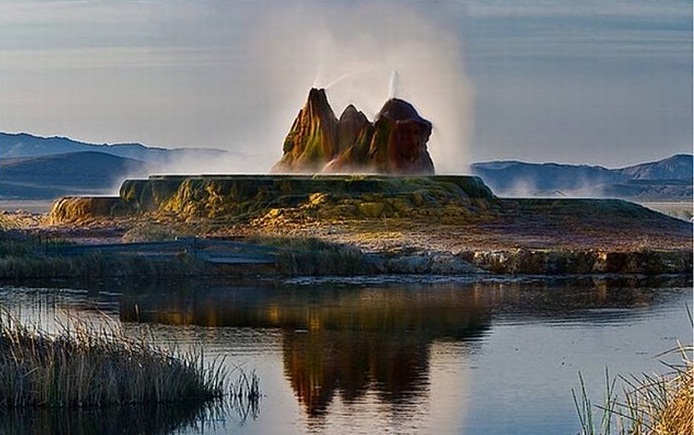 The Fly Geyser, Nevada, U.S.A. - The geyser at sunset 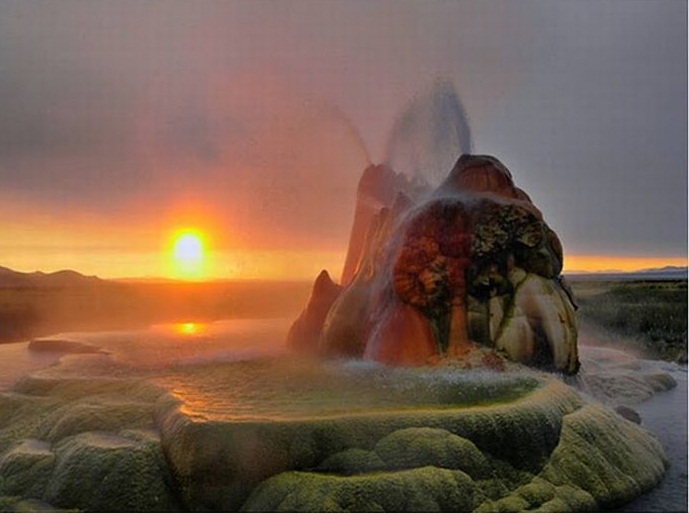 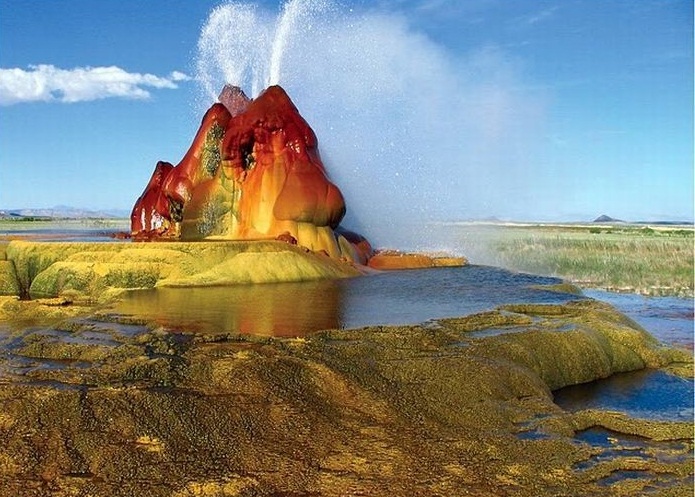 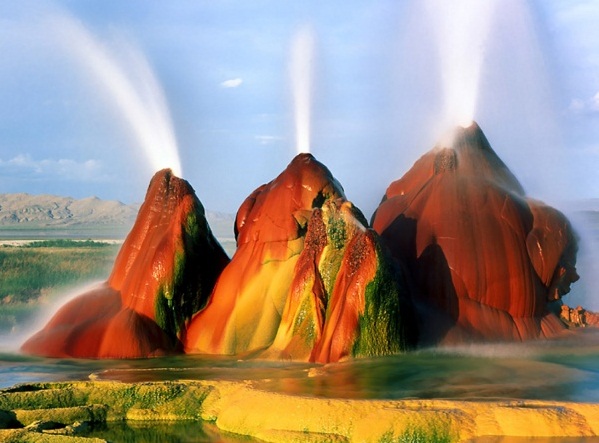