American War Memorial in Canberra is a huge and astonishing configuration situated in the suburb of Russell in Australia. The Memorial is a huge construction, about 78 meters tall, is made from aluminum and is observable from much of central Canberra.  American War Memorial was constructed to memorialize the assistance of the United States of America in the Pacific theatre, during International World War in 1941-1945. The memorial is affectionately known as “The Eagle”, which is the symbol of the entire memorial. The memorial symbolizes the deep gratitude felt by Australians to American service people for their assistance during World War II, and the close ties which were established during that conflict. The memorial is a stunning construction which hosts an unbelievable monument. The Memorial is often visited by a great number of visitors from all around the world.

The History of Australian–American Memorial

The Memorial was opened by Queen Elizabeth II on 16 February 1954. The story begins in 1948 when the Australian-American Association resolved to establish a Memorial in Canberra in the form of a monument or statue, to perpetuate the services and sacrifices of the United States forces in Australia and to symbolize Australian-American companionship in arms. They decided to make a Memorial of considerable size and with a striking design, so in 1949 took place an Australia-wide competition. From the thirty-two entries received, the design by Richard M. Ure won the competition.
It was very hard decided where to build the memorial. The search for a perfect place for the Memorial extended from 1948 to 1951. Eight different locations were considered before the site now occupied, at the apex of the Kings Avenue, was selected and approved by the Commonwealth Government. Because the area was a bushland, they had to clean it and prepare it for the big construction. In 1950 the Prime Minister R.G. Menzies launched a nation-wide appeal to raise the amount of 50,000 pounds, a vast sum at the time, to build the Memorial. Within six weeks, more than 63,000 pounds had been raised. Memorial was finally completed at a cost of 100,000 pounds. Work commenced in December 1952 and was completed in just over one year. And from then, the memorial hosts a large number of tourists.

The main feature of Australian–American Memorial

The main feature of the Australian-American Memorial is a unique hollow octagonal column with a steel framework, which is sheeted with aluminum panels and sandblasted to give the facade of stone. Two murals feature at the base, one relating the story of American combat in the Pacific and the other a profile map of the United States in copper. The column is surrounded by a water-filled moat about 3m wide. Under the dedication is a bronze wreath where floral wreaths are often laid on official commemorations. The column is topped with a bronze globe surmounted by a stylized figure of the American Eagle by the distinguished sculptor, Paul Beadle. The eagle and sphere alone are 11 meters high.  At the base the monument, on a plaque are written the following inscription: “In grateful remembrance of the vital help given by the United States of America during the war in the Pacific 1941-1945”.
Because of its location, near one of the three nodes of the Parliamentary Triangle and its uniqueness makes this memorial one of Canberra's best-known and most recognized monuments.

Write your Review on Australian-American Memorial and become the best user of Bestourism.com 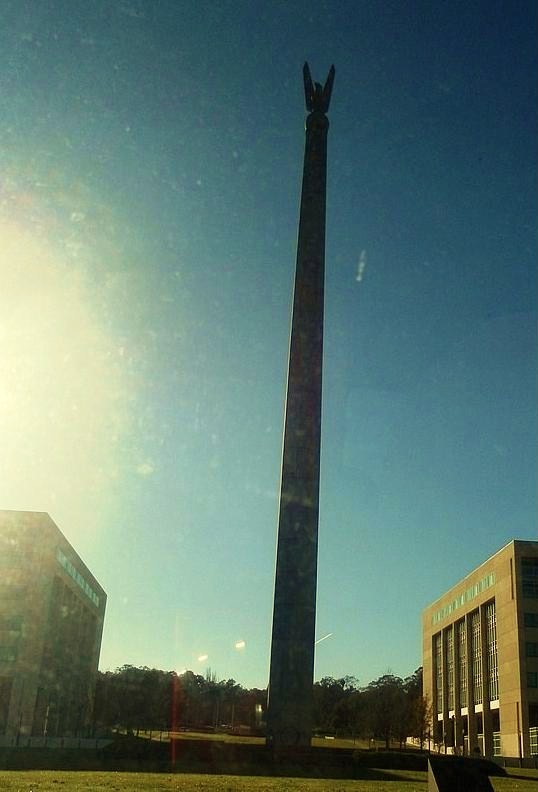 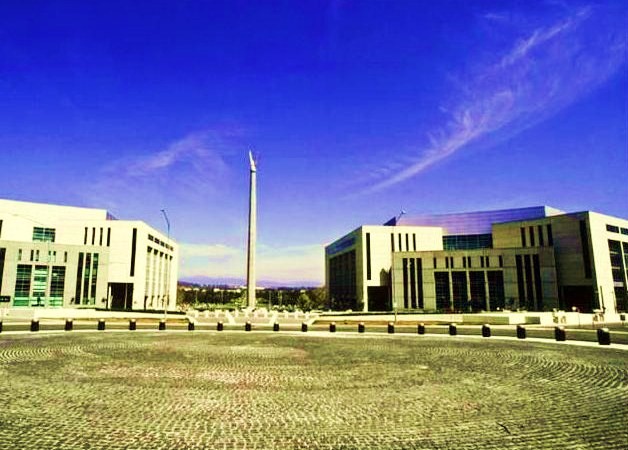 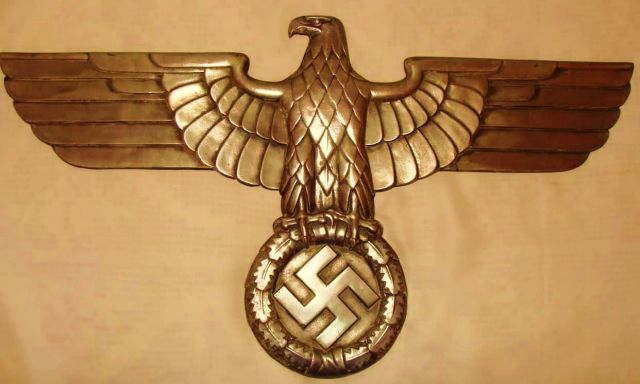 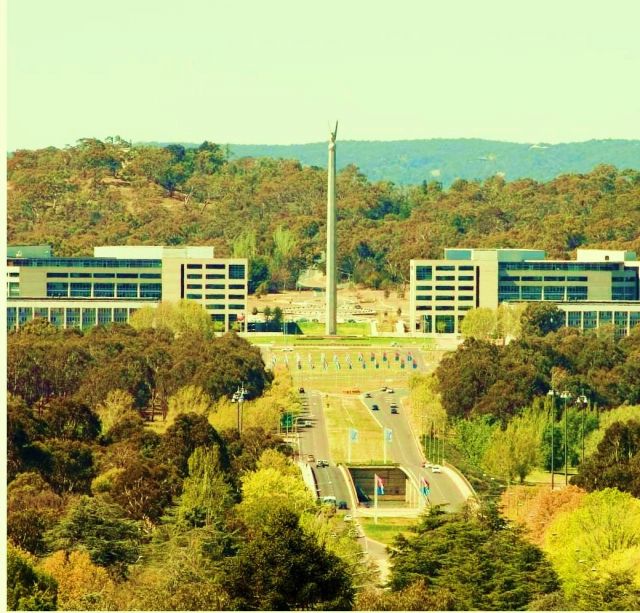 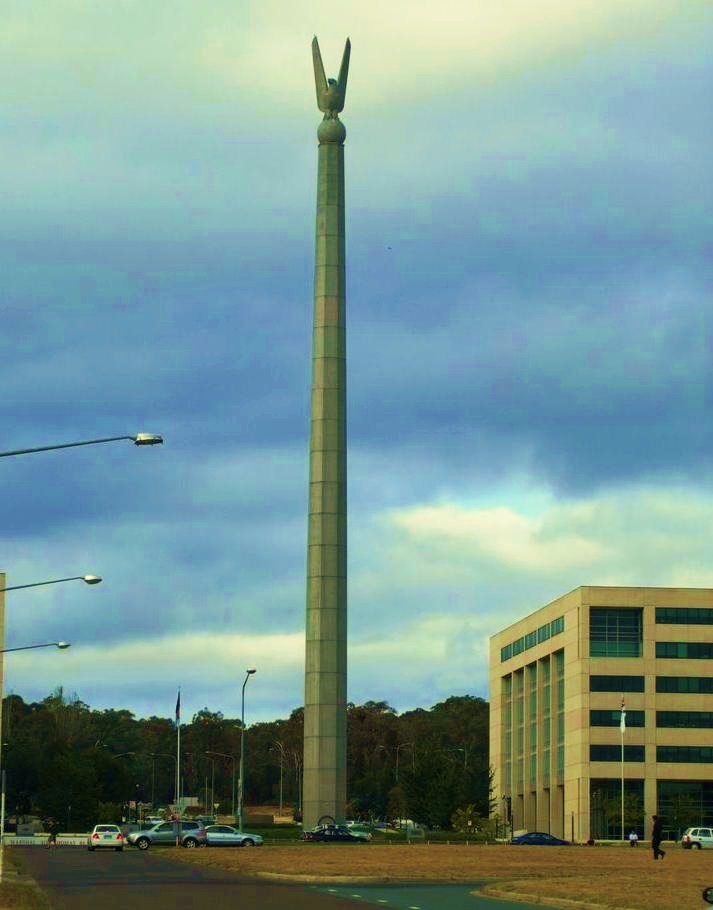 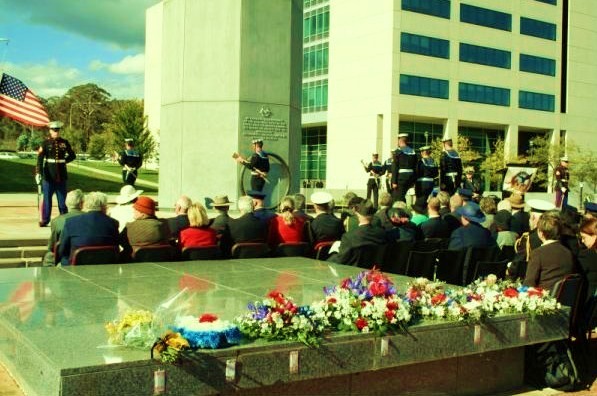 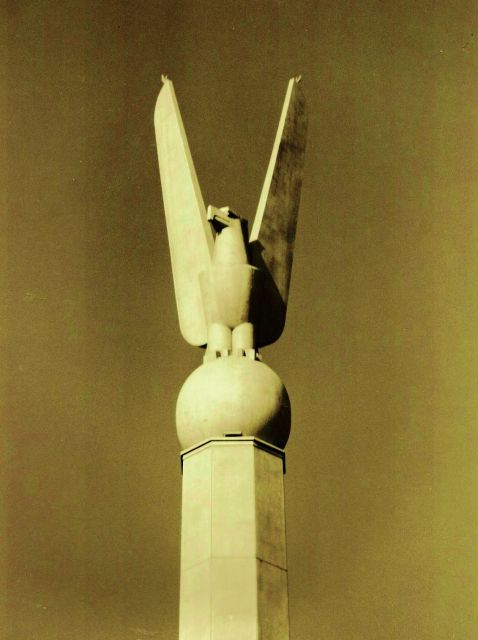