Destinations / The best places to visit in Madrid, Spain / Gran Via


The only street that should not be missed on a trip to Madrid is the Gran Via, a veritable exhibition of 20th century architecture. This lively street and one of the most important shopping areas of the city. Also here are also a lot of hotels and cinemas. But what makes this street is exciting architectural design of large buildings. A ride on a crowded street must not forget to head higher from time to time to admire the lavish decoration of the most important 'Edificios'.

In the mid 19th century, planners in Madrid decided that a new bus road building must fit to join the Calle Alcala Plaza de Espana. The project requires that many downtown buildings to be demolished. Decades after the first plans had been made, construction not yet started, and newspapers ridiculed the project, to cynically calling it 'Gran Via', the great journey. Finally in 1904 the project was approved and construction began two years later. The last part of the street was completed in 1929.
Created new opportunities for architects artery who could create large buildings in the latest architectural styles. Calle Alcala first building from the eyes is monopolizing Edificio Metropolis Metropolis building. It was built between 1907 and 1911 after a project architect Jules & Raymond Février. Statue at the top of the building was replaced in 1975 with winged victory statue of a goddess.
Little further on there is the Gran Via Edificio Grassy, another building on the corner with a small tower. It was built in anul1917. The Edificio Grassy already seen the Edificio Telefonica tower, a skyscraper built between 1926 and 1929 for the Spanish telecommunications company. Building height of 88 meters was the highest in Madrid and would fit well in Chicago. In a not very surprising, Telefonica building architect was an American, Louis S. Weeks.
Going to Plaza de Espana, Gran Via crosses a small square, Plaza del Callao. This market is the heart of cinema in Madrid, here there are about six cinemas. One of those cinemas, Capitol, is located in a gorgeous art deco building.
The last part of the Gran Via, built between 1925 and 1929 leads to Plaza de Espana, a huge market dominated by two skyscrapers built in the 1950s, Edificio de España and the Torre de Madrid. Here is Calle Gran Via Princessa, which leads north to the Arco de la Victoria.
Sponsored Links

Write your Review on Gran Via and become the best user of Bestourism.com

Maps of Gran Via

Images of Gran Via, icons, photos, figures, visions, appearances, illustrations, snapshots, captures, canvas and pictures of Gran Via - The best places to visit in Madrid, Spain 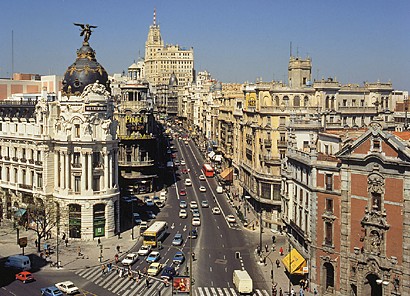 Gran Via - Gran Via aerial view 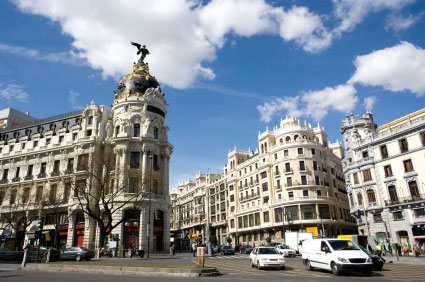 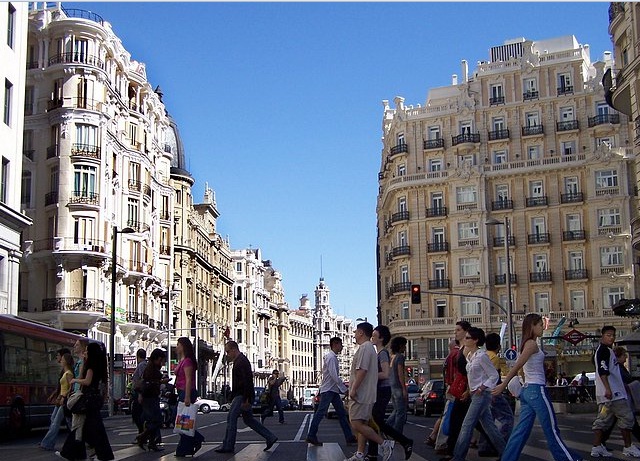 Gran Via - Gran Via view