Plaza Mayor, a large square in downtown Madrid is very popular among tourists and locals alike. Rectangular market has a uniform architecture, very similar to market Vosges in Paris.

In the Middle Ages it was just a market place of consumer goods outside the city walls. In 1560 King Philip II asked Juan de Herrera, architect of the Escorial to transform the church fair in a real small square. Only in the year 1617, during the reign of King Philip III, Plaza Mayor began construction of the new. Following his directions seccesorului Herrera, Juan Gomez from Mora, the market was completed in only two years.
The result is a huge market, which measures 120 meters long and 90 meters wide. He was surrounded by wooden buildings, some six storeys high. Fires have destroyed all the buildings in the Plaza Mayor three times throughout history: in 1631, 1672 and 1790. Every time were reconstructed for the last time after Juan Villanueva project. High buildings after the last fire can be seen today.
Since it was made, Plaza Mayor was the center of many festivals, bullfighting, coronations and executions. The events witnessed even 50,000 spectators. It is used nowadays for certain events.
In the central market there is a bronze statue of King Philip II of Spain, built in 1616 by Italian sculptors Giovanni Bologna and his disciple Pietro Tacca. In 1848 was moved from Casa de Campo in the Plaza Mayor. In the same period, small square was redesigned to remove gardens were in 1936.
The most important building in the Plaza Mayor is the Casa de la Panaderia, bakers guild headquarters. This building was completed in 1590, even before they set up market. The current design with symmetrical towers dates after the last fire in 1790. The walls were a great color to add just recently in 1992.
Sponsored Links

Write your Review on Plaza Mayor and become the best user of Bestourism.com 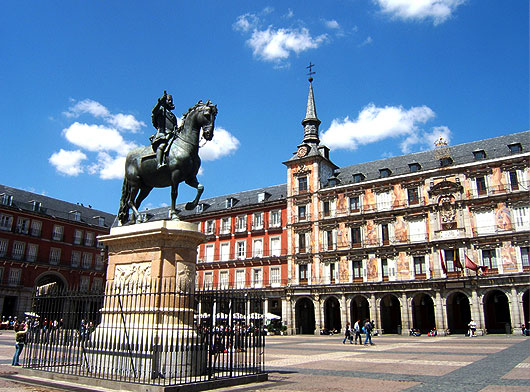