The Orthodox Cathedral, Kazan Cathedral, which is one of the largest buildings in the northern capital is located in the heart of St. Petersburg, on the Nevsky Prospect.Its height is 71.5 meters. There was a small wooden church of the Kazan Mother of God on the Nevsky Prospekt at the beginning of the XVIII century. In subsequent years, in its place a stone church was built, called Christmas. The Kazan icon of the Mother of God was brought in the temple after and it was called Kazan. In the era of the reign of Emperor Paul I, the old building was in need of renovation, and therefore was decided to be built in the capital of the Russian Empire, the temple, which has no less dignity than the Roman Cathedral of St. Peter. After reviewing the many proposals the choice fell on a project of Andrei Voronikhin, who was a former serf of Count Stroganov. The construction of the cathedral was completed in 1811, and Andrei Voronikhin was awarded. The work on the construction of the temple was performed by Russian serfs, and building materials were brought from different parts of Russia.

It is a stunning work of architecture which consists of ninety-six columns arranged in a semicircle thirteenth meters Colonnade, emphasizing the central part of the cathedral. In the area adjacent to the territory of the Kazan Cathedral were four sculptures – of Prince Vladimir, John the Baptist, Andrew and Alexander Nevsky. The temple doors were copied from the doors of Florentine baptismal home. The interior of the cathedral is similar to the luxurious palace premises, and falling out of window openings sun's rays to visually increase the height of the dome. Kazan Cathedral is inseparable from all the major historical events. This is where a prayer service was held, after the place of battles where Kutuzov went, and where the great Russian commander was buried in the Kazan Cathedral in the crypt.

The commemorative sculptures of Kutuzov and Barclay de Tolly are also in the cathedral. In Soviet times, the service in the Kazan Cathedral stopped, and the Museum of History of Religion has been opened. The famous icon of Kazan Mother of God was sent to the Prince Vladimir Cathedral. Kazan Cathedral suffered during the Great Patriotic War - during the siege the building was destroyed by shells. In the postwar years, the structure has undergone reconstruction and repair. After the collapse of the Soviet Union the service in the largest cathedral of St. Petersburg was re-installed the cross on the dome was reput and the icon of the Mother of God was returned to its original place.

Write your Review on Kazan Cathedral and become the best user of Bestourism.com 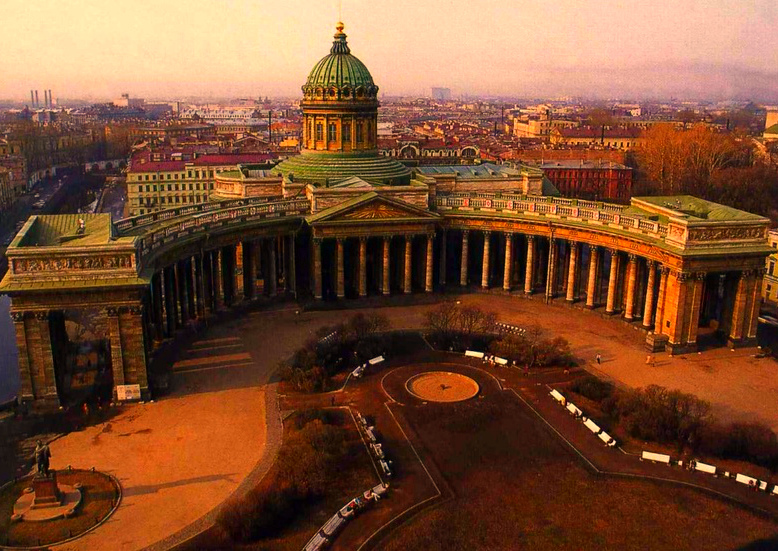