Destinations / The Best Places to Visit in the Peloponnese, Greece / Epidaurus


Epidaurus possesses one of the richest and most beautiful archaeological discoveries, the ancient theater which has been extensively renovated especially during the summer theater festival in Athens. The theater was built in 4 century b. Ch. and fits 14,000 spectators. But Epidaurus is surrounded by other interesting buildings, as the temple to the god Asklep the local museum, or "tholos" ,circular whose use has not been discerned so far.

Here is one of the seven wonders of Greece: the theater of Epidaurus, whose auditorium today draws thousands of visitors, especially in the summer, to attend performances of the annual Festival.Once, this place was very famous because of Argolis,attracted by the reputation of Asklépios, the god of medicine and healing where they descended medical knowledge from Hippocrates .

The archaeological site of Epidaurus, in addition to the famous theater, includes the stadium (you can recognize some of the bleachers and the tribune of the judges), the Museum with its ingenious construction that partly offsets the transfer to Athens of the most interesting finds and the area of ​​the sanctuary, full of Hellenistic-Roman buildings intended for athletic competitions. The gymnasium, an Odeon and the gym; behind, the temple of Artemis dating from the fourth century BC. On the right, you recognize the complex dedicated to Asclepius, where patients were waiting for the appearance of the god, the temple (380 BC) of which remain foundations, a spa complex and the Tholos, curious structure of access to ' sacred area from the meaning still obscure.

So called to the presence of numerous plants of laurel ("Dafní", in fact) the name of this monastery was founded in the fifth-sixth century in the place where there was a sanctuary named after Apollo. Just laurel betrays the original use of the building, which celebrated, in addition to Apollo, the myth of the nymph Daphni turned into a laurel. Held by the Cistercians from 1211 until the arrival of the Turkish in 1458, it was returned to the Orthodox worship in the sixteenth century, was abandoned in the nineteenth century and fully restored after the earthquake of 1999. A wall with battlements, towers and battlements encloses the few convent buildings remain, including the refectory apse (XI century) and the Cistercian cloister at low Gothic arches, from where you have a lovely view of the church, one of the finest examples of Byzantine art, for wall decoration that adorns the walls . It was built in the late eleventh century and enlarged by the Cistercians, it preserves precious mosaics on a gold background that tell the life of Christ and the Virgin. There is a large central dome mosaic depicting Christ surrounded by prophets in Byzantine clothes, on the walls of the transept other episodes of the New Testament, while the apse, between the archangels, is the figure of the Virgin. For its historical significance, artistic and spiritual, the monastery of Daphni was included by UNESCO in the list of World Heritage.

The archaeological site of Epidaurus also includes a museum and the area of ​​the Sanctuary of Asclepius not matter to tourists. Because there seems to be none other than the beautiful theater, one of the seven wonders of Greece, made by Polykleitos the Younger (fourth century BC) on the slopes of the hill. 54 orders of steps, 14,000 spectators and acoustics that, already known since its inauguration, has meant that the stage of this amazing theater, one of the best preserved of the country. The orchestra circular, clay, still continues to be trodden by companies of actors who, in the summer, played in the representations of the charming Epidaurus Festival.

The original construction remained the base of an altar dedicated to Dionysus and the side entrances, nothing is stored instead of the scene, enclosed by 18 Ionic columns of which remain the only basis. It matters still. The view from the top of the auditorium gives its best at sunset and sit on the steps of stone, perfectly preserved, will still give great emotions for any tourist, especially when the characters come to life on stage and the story sung by the great greektragedians.

A labyrinth, round shaped, was the entrance to the temple of Asclepius. Raised in the second half of the fourth century BC and designed by Polykleitos the Younger, the structure has a meaning still mysterious and indecipherable. For some, this celebration of the curved line would be linked to the sacred serpents (symbol of Asclepius) who took refuge here. Identifying six concentric circular walls, colonnades and some other solid, that enclose the true place of worship.

Write your Review on Epidaurus and become the best user of Bestourism.com 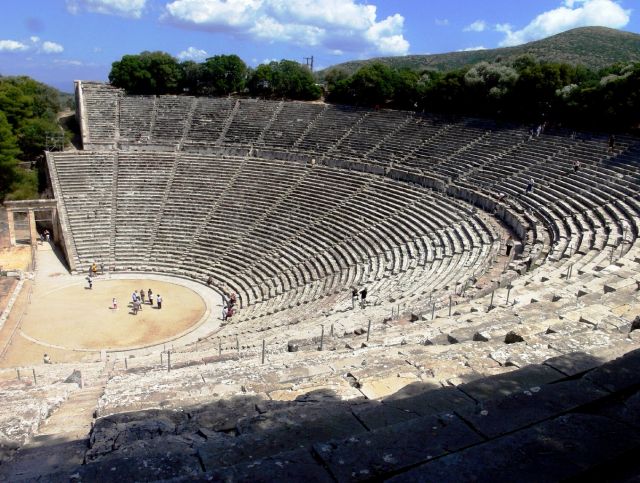 Epidaurus - The Great Theater of Epidaurus