Destinations / The Best Places to Visit in Kiev, the Ukraine / St. Vladimir Cathedral

In 1852, Metropolitan Philaret of Moscow suggested to build a great cathedral in Kiev. The reason was the anniversary of 900 years since the baptism of Kievan Rus, made by Prince Vladimir the Great of Kiev (St. Vladimir). People from the Russian empire began to make donations for this purpose. Thus, until 1859 the cathedral fund had already accounted for a large sum, amounting to 100,000 rubles. Pechersk Lavra (Monastery of the Caves) of Kiev has produced one million bricks and gave the cathedral.

The design was originally executed in neo-Byzantine style by the architects I. Schtrom, P. Sparro, R. Bemhardt, K. Mayevsky, V. Nikolayev. The final version of the design belongs to Alexander Vikentievich Beretta. It is a traditional construction in six parts, three apses crowned by seven domes.

The cross of  the main dome height is 49 meters. What is particularly striking  is the colorful interior of the cathedral. The mosaics were executed by Venetian masters. The frescoes were made by a group of painters, under the guidance of Professor A. Prakhov. They are S. Kostenko, V. Kotarbinsky, Mikhail Nesterov, M. Pymonenko, P. Swedomsky, Viktor Vasnetsov, Mikhail Vrubel, V. Zamyraylo and others.

The painting of the Holy Mother of God Vasnetsov, located in the apse, impresses with its beauty. The entrance door is decorated with bronze sculptures in relief, depicting her Saint Olga (Princess Olga of Kiev) and Saint Vladimir . The first work is made by sculptor R. Bakh, and the second by the sculptor H. Zaieman. The iconostasis is carved of white marble brought from Carrara.

The construction of the cathedral was completed in 1882. However, the paintings were completed only in 1896. The Cathedral suffered some damage during the Soviet-Polish war of 1920. During the Soviet period, the building narrowly escaped demolition, but it was closed. Until the Second World War, the Saint Vladimir played the role of religion and atheism museum. Before it was destroyed by the Bolsheviks, the relics of Saint Barbara, a martyr of the third century, were transferred from the Monastery of Saint Michael in the Cathedral of St. Vladimir and have stayed here ever since. After the war, the cathedral was reopened and it is functional. It was at that time the main church of the Metropolitan of Kiev. Also, Saint Vladimir was one of the few places in the USSR where tourists could see and visit an Orthodox church in running. Renaissance Monument lived when the Orthodox religion in 1988. At that time, the celebration of the millennium of the baptism of Kiev changed something in Soviet policy regarding religion .

Write your Review on St. Vladimir Cathedral and become the best user of Bestourism.com 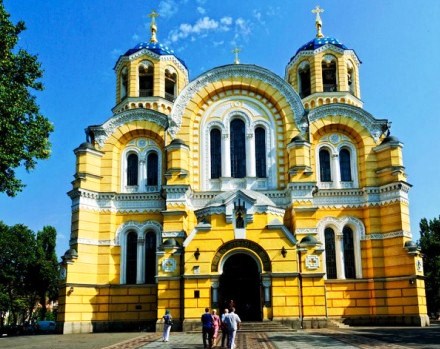