Destinations / The Best Places to Visit in Kiev, the Ukraine / Opera House


National Opera of Ukraine is the largest musical theater in the country and one of the most famous ballet and opera houses in Europe. Its luxury building, which fits well within historical ensemble of Kiev, is considered a true architectural gem capital. The first opera company was formed in Kiev in the second half of the XIX-th century. It was considered one of the best theater companies in the Russian Empire with Moscow and St. Petersburg. First opera troupe was in Kiev City theater, but after a fire in 1896, which almost completely destroyed it, the question arose about the construction of a new theater of opera and ballet.

October 27 Old Style (November 8  the new) of 1867 was a holiday to Kiev and Ukrainian culture historical date. For the first time lifted the veil of the Kyiv Opera! Debut troupe became the staging of the opera "Askold's Grave" Alexei Verstovsky which passed with unprecedented success. In the early years of the theater's repertoire mainly by Russian composers: "Life for the Tsar", "Ruslan and Lyudmila" by Mikhail Glinka, "Mermaid" Dargomyzhsky, "Maccabee" A. Rubinstein, "hostile force" Alexander Serov. However, European classical high enough featuring "The Barber of Seville" by Rossini, "The Marriage of Figaro" WA Mozart's "Magic Archer" K. Weber, "Lucia di Lammermoor" Donizetti, and one after another Verdi opera, became a favorite for Kyivites. Theatre confidently won the affection of opera lovers, attracted the attention of composers, as, in particular, shows great interest . Tchaikovsky staged his works is on the Kyiv stage. 1874 in Kiev sounded "Oprichnik". In the life of Peter Tchaikovsky in Kiev were also raised his opera "Eugene Onegin", "Mazeppa" and "Queen of Spades".

Kiev Opera, performed  the style of the French Renaissance. Its magnificent hall, which consisted of stalls, amphitheater, mezzanine and four tiers could accommodate up to six thousand spectators. The interior decoration is dominated by velvet and bronze, and the hall was covered by magnificent crystal chandeliers made in Vienna on request.

Facade of the building was decorated with busts of famous Russian composers who gave Kiev opera artists of the Mariinsky Theatre. The main entrance is decorated with the image of arms of the city of Kiev patron - St. Michael the Archangel. However, believers locals thought it was blasphemy, and the emblem was replaced by a composition depicting mythical creatures: griffins with a lyre, which is a symbol of music.

Write your Review on Opera House and become the best user of Bestourism.com 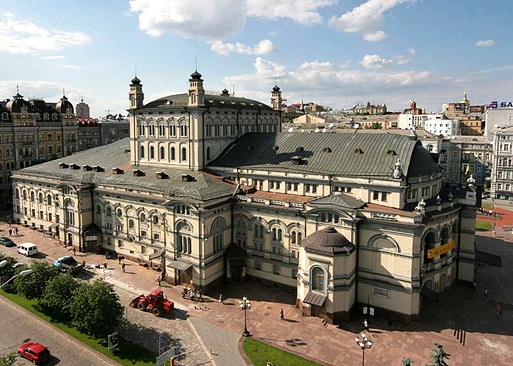