Destinations / The Best Places to Visit in Kiev, the Ukraine / Independence Square

By the X century the terrain in the vicinity of the present area was called Perevisysche and was a swamp. Where now begins Sophia Street, is located the Lyadsky gate that led to the upper city. At the end of XVIII - early XIX century on the site of the future was a wasteland area with access to the remains of its defensive walls. The place of abandoned ponds titled "Goat swamp", is located just under the inner slope of the ramparts, between the current lane Shevchenko streets Malopodvalny and Patorzhinsky. The area itself was formed in 1830 -'s, when were demolished remains of defensive walls. Then it was called Khreshchatytska from the name of the street, which is directly adjacent. In 1876 on the square was built the City Council called the Duma. In 1913, in front of the City Council was a monument to Stolypin.

In 1919 the area was renamed by the Soviet, and in 1935was an area of Kalinin. In 1941 the building of the Duma (after the Revolution housed the regional committee Communist Party (Bolsheviks) of the Ukraine) burned as an area of greatly increased due to the destroyed odd side Downtown. In 1944 a competition designed the reconstruction of Downtown, adjacent streets and squares. These projects Kalinin Square, situated on both sides now Downtown, were given the role of the main town square. Modern buildings area is formed by buildings 1950 -'s - 1970's.

In 1961 was built the hotel " The Ukraine" (before 2001 - "Moscow"). In subsequent years the area was repeatedly rebuilt and reconstructed. In 1977 the area was renamed after the October Revolution. In its center was located a monument to Lenin and fountains. The current name was acquired after the Ukraine's independence in 1991. The Metro station "Independence Square", opened in 1976, changed its name from the area once.

In 2001 was made a capital restructuring of the area: a host of new monuments, sculptures and fountains. In the center was set a high white column, which is crowned by the figure of a girl with viburnum branches in their hands, symbolizing the independence of Ukraine. Were recovered Lyadsky goal, they set the city patron figure of the Archangel Michael. In the area was built a large shopping center.

The area has become a popular venue for various political rallies and processions. In winter 2000-2001, held at Maidan protest action "Ukraine without Kuchma", and in 2004 it became the center of the Orange Revolution. Nowadays the splendid panoramic view of Old Kiev opens from the upper floors of the square buildings.

The square has a modern look and one can visit and see the most beautiful shops, hotels, cafes, the fountains of the square decorated with wonderful, attractive statues, the Independency Kolumn, the Friendship of Nations fountain and the domes of Sophia Cathedral.

Write your Review on Independence Square and become the best user of Bestourism.com 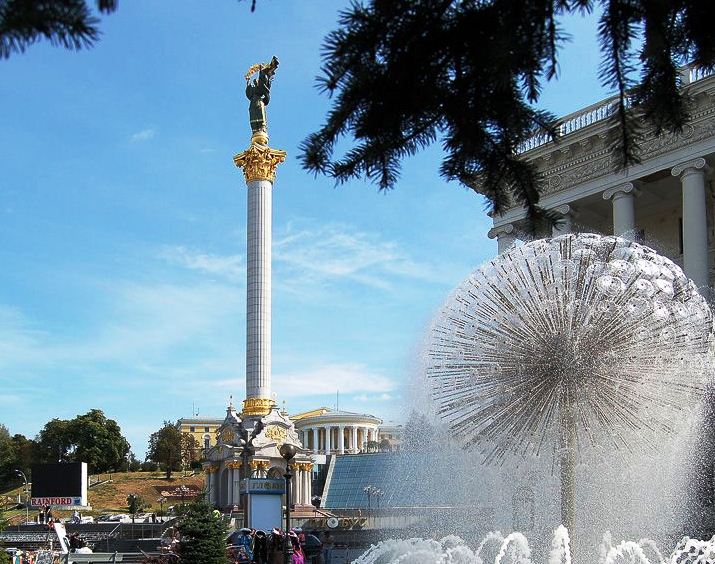