It is situated in the Beaubourg quarter, the intersection of rue de Turbigo and rue Reaumur on the surface and lines 3 and 11 below the surface. The name of the station got its name from the Museum of Arts and Crafts , located above it. This is one of the few metro stations, the French, which is worthy of careful study. So, do not miss the Museum of Arts and Trades above the station is full of inventions and oddities of the eighteenth and nineteenth centuries, including Foucault's original pendulum used to demonstrate the rotation of the Earth. The Art Nouveau entries in the metro of the architect Hector Guimard in Paris are elegant symbols of public architecture. They give the feeling of being hidden in a garden rather than in a metro station. What is underneath is often quite different, with replicas of the Louvre's collection, the Louvre-Rivoli station and reproductions of Rodin in Varenne station. The surreal interior of the Arts and the Crafts are designed by the Belgian comic author François Schuiten.

Travels can be seen in a submarine inspired by Jules Verne, with portholes and huge cams. The train is removed in the tunnel, and you suddenly discover that gets into the famous "Nautilus" by Jules Verne: oval wall copper plating on thick staves, large round windows of thick glass, strips of neon lights on the platforms and enigmatic great gear from the ceiling in the center of the room, connected by a thick shaft of the crank mechanism. And if Paris is not over you, you see the thickness of sea water. According to Jules Verne, the most famous submarine of all time ever rested under the rubble of Lincoln Island, exploded during the eruption of the volcano. Buried under the earth and water, the lord of the seas rests somewhere in the Pacific Ocean, becoming the grave of an Indian Prince Dakkar, better known as captain Nemo. 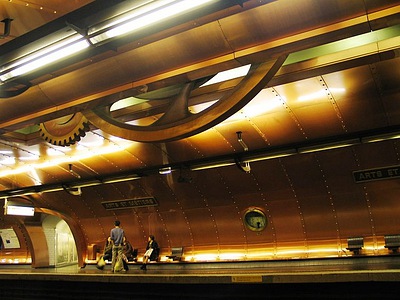