In the center of the island, right next to the Thalang National Museum, is situated the  Heroines Monument. Thalang slides and a monument to the legendary sisters located 10 kilometers from Phuket Town. The area of Tha Rua and the intersection where it spreads is considered one of the biggest on the island. History, as we know, has a female face. It just confirms once again the sisters Monument Thao. Looking at it, unwittingly returns at the end of the XVIII century, when the land of Phuket assailed the invaders from Burma.

The army was strong and invaders seemed that the island was about to lose its independence and its rich history sink into oblivion. But two seemingly defenseless women, sisters, Thao Thep Kasattri and Thao Si Sunthon, women were able to gather Thalang into a single powerful army. Dressed in men's clothing, women warriors built a strategy to combat such a way that the enemy took them for reinforcements thalangs soldiers, sent from Bangkok. Burmese invaders retreated after a month of heavy fighting on March 13, 1785, leaving Phuket alone. The monument is a bronze sculpture in a natural growth of two women holding hands, dressed in male clothes. Each one in his right hand holds a Thai sword.

They rise above the expanse of Thalang on a white marble pedestal, even in bronze standing side by side, protecting the freedom of his native land. The monument was created by local residents. Opening the monument took place on May 23, 1967. Of course, most clearly felt reverence sisters heroines of Thai, visit Phuket in mid-March 13, a public holiday here the Victory Day. On this day, near the monument were held celebrations, festive processions and fairs.

Write your Review on Heroines Monument and become the best user of Bestourism.com 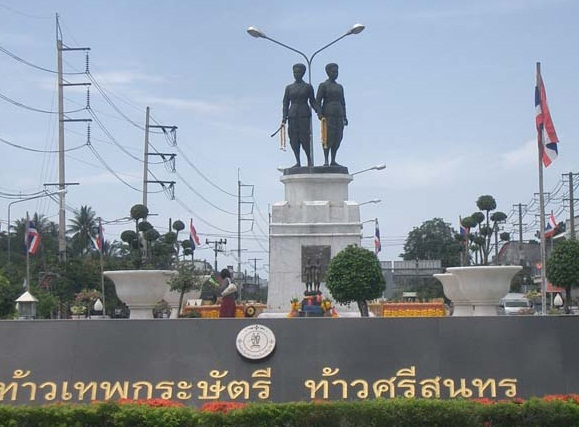