This interest is perhaps the most shocking, but the most interesting performance, which can be seen not only within the island, but also throughout Asia. The Vegetarian Festival Ngan Kin Jeha, despite its peaceful name, makes the eyes of its witnesses blind with horror. The action begins on the first day of the ninth lunar month of the Chinese calendar (often in October or November) and lasts for nine days.

The holiday has a rich history of vegetarianism. It is considered the beginning of 1825, when the Chinese working in the mines of tin mining in Phuket, decided to go back to vegetarian eating habits, giving up meat entirely. Thus, they wanted to stop the spread of the epidemic. It worked and the Chinese were able to convince a number of local residents that living and eating on the ancient system of the Nine Gods, you cannot only healthier, but also physically and spiritually cleansed. Later, adherents of this system were united in the brotherhood of "Gods Warriors" - Song Ma.

The members of this fraternity, due to their special way of life, are endowed with supernatural powers. Entering into a state of ritual trance, they conduct ceremonies, which, in their belief not only clean them but everyone around them. These rites include multiple piercings in their body with knives, daggers, swords, needles, dance on hot coals or broken glass. Six days before the Ngan Kin Jeha "Warriors of the Gods" starts, they begin to abstain not only from meat but from sex and alcohol. Gathered in the walls of the temple, the "Warriors of the Gods" (all in Phuket has six Chinese temples) under the drum rhythms reach a trance, then start to make fun of their own body.

It is in this state, dressed in white dresses, filled with piercing-cutting and pierces things, adherents of the Nine Emperor Gods and paced the streets of Phuket. In the eyes of the public continues to pierce the Song Ma tongue, face, back, going through the cleansing from evil spirits. All these actions are accompanied by just a terrible deafening noise. The explosion of firecrackers, drumming, loud music (the louder the better) help banish those same spirits that "life poisons" people from where such a painful way to get rid of the community members. Coming out of the trance, the warriors pulled out bloody ritual implements and currently live on with a deep sense of purification. Only the numerous scars remind the bloody ritual, healing until the next year.

The Vegetarian Festival comes not only with the Ma Song, but also want to look at everything that happens from the outside. While the participants are engaged in self-cleaning rituals to their terrible deed, tourists can taste and enjoy the variety of vegetarian dishes. The most vivid and grandiose festivals are held near the temple of wool Juyo Tui, which is located in Phuket Ranong on the street.

Write your Review on Ngan Kin Dzheh and become the best user of Bestourism.com 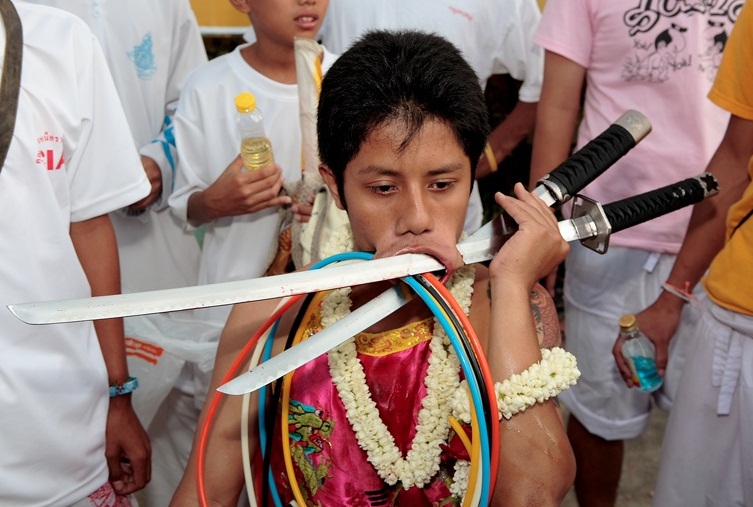