If there were sea in Eden, it should have looked something like in the Bay of Phang Nga. The Phang Nga Bay is one of the most spectacular regions of Thailand, where you can find a lot of really unique attractions. It is pretty easy to see why James Bond chose this place, among the towering cliffs with the nests of swifts to arrange his lair in the famous film "The Man with the Golden Gun." Most of the Gulf, as well as part of the coast are now included in the National Park of Phang Nga. Most tourists visit it from Phuket town and tours are advertised as "a trip to James Bond Island".

The city and province of Phang Nga: General Information

The city of Phang Nga is located on the coast of the Andaman Sea and it is at 788 km from the capital city of Thailand. At the same time, it is the administrative center of the province of Phang Nga. Phang Nga is a primarily agricultural province in southern Thailand. This is a melting pot of Buddhists, who came from China, Muslims and even sea gypsies. Most of the population in rural areas is Muslim. Despite the ethnic diversity, all communities live in peace and harmony and are not sources of any religious tension. The vast territory of the province has been formed by a number of national parks, diverse and rich nature, abundant marine life. The most famous national parks of the province are : Phang Nga, Khao Lak , Mu Koh Similan.

Phang Nga Bay is one of the most attractive places in the world according to the rating of many influential publications and agencies. It is only 15 km from the town of the same name where you can order a basic tour. Of all the provinces of Thailand, located on the coast of the Andaman Sea, the islands of Phang Nga Bay are the most famous and popular. And not just because of stunning landscapes, gorgeous beaches and beautiful weather, but the fame which they acquired after the shooting of one of the most popular series in movie history, James Bond 007. In 1974, a Forest Park was formed on its territorty. After examining the area, specialists of the Royal Forestry Department came to the conclusion that there was a need for a national park here, which was established by the Royal Decree on April 29, 1981.

Phang Nga is the second largest national park in Thailand, located on the coast. The Park, an area of 400 km2 protects the largest area of mangrove forest remaining in Thailand today. More than 80% of the park is covered by the sea and 42 islands are the largest natural attraction in the region. Most of the islands are uninhabited. The height of some of them is more than 100 meters, the water eroded their base, forming tunnels and caves. Scattered small islands off the coast have strikingly picturesque views. The area is almost in the same way as hundreds of thousands of years ago when this area had not yet been mastered by man. Each island is unique, it has a beautiful shape, with caves, small beaches and evergreen trees, which can only be seen by boat or canoe.

Tourism in the region focuses on the advocates of eco-tourism,that does not need comfortable living conditions, food and entertainment. In Phang Nga Bay you will find a large number of extensive beaches, as many of the islands have rising vertical cliffs. Resting on the small but beautiful beaches, as a rule, pursues a variety of trinkets dealers trying to sell all goods. The most popular way of exploring the islands is by boat, you always get the most from a trip to Phang Nga. The best time to visit is from December to April.

The most popular attractions of Phang Nga are the Khao Island and the Ko Tapu Pinkan, the first gained international fame with the film "Man with the Golden Gun" with James Bond in the title role.

Koh Pannyi village is notable for the fact that the Indonesian fishermen built it on stilts in the sea. All one-story dwelling is adjacent to the south of the island. The population consists of about 300 families, they number between 1,500 and 2,000 people who descend from three families of Malay fishermen who founded Pan Bay in the late 18th century. It was in this period, the law restricted the ownership of the land for the people of Thai nationality, so this village was built entirely on water. With the increase of welfare of the community, a growing tourism industry in Thailand and the legal ability to purchase land on the shore of the island was built the first building of the mosque.

Koh Pan island is small, most of which is a huge, almost vertical cliff. Hundreds of huts, shacks, restaurants and homes in which residents live are built on stilts above the surrounding shallow sea. No one really says how much wood and concrete piles keep this extraordinary village, but it could be considered interesting and an unique achievement in engineering. From the first days of existence, fishing was the only craft of the Muslim community, but today it lost its position due to tourism. Today, half the residents are employed in the tourism sector and 40% are still fishing. The village has a school, a mosque, a clinic, many small souvenir shops and several large restaurants, all overlooking the sea, where tourists can enjoy a fresh seafood dinner. The last major construction project on the island of Koh Pan was the construction of a bungalow, offering its visitors a cheap accommodation. At lunchtime, from James Bond Island come here up to 3000 tourists. As soon as the travelers leave, restaurants and shops are closed and the island is transformed into a quiet community of fishermen.

Since Koh Pan is located in the Phang Nga National Park, construction is allowed only to residents of the community. More recently, life on the island has been very difficult without electricity, fresh water from the mainland and new technologies. Today, there is electricity, even though it is 6 times more expensive than in Phuket, Internet, fresh water. The island has only a police officer, who has virtually no work,good news for everyone. Today the village of Ban Ko was one of the main attractions of Pha Nga Bay. But despite the significant growth in tourism, life in Koh Pan still depends primarily on fishing, as tourists visit the village in large quantities only during the dry season, during the rainy season the number of visitors is limited.

Koh Hong is a group of islands at an hour's drive from the town of Krabi , within which there are many famous and beautiful caves, which are divided into many "rooms" with stalactites hanging from the ceiling. Koh Hong is translated from Thai meaning "island-room" or "island cave." Its name comes from the process of erosion of caves on the island, which was formed as a result of a large lake with a small passage to the sea. At high tide, boats and kayaks are included in the "room" where visitors can swim in crystal clear water with a depth of about one meter. The island of Ko Hong contains a large number of swifts nest which is an important ingredient to make soup, a delicacy. Soup of the nests of swifts is considered a delicacy not only in Thailand but also China, Vietnam and some other countries in Southeast Asia. The thing is, that swifts during the construction of their nests exclusively use saliva. Here you can witness an unusual scene where young people climb to great heights with bamboo sticks to collect nests of these birds, really risking life and limb. Deaths and injuries occur, so be careful! The island has only a beach, the Pelay Beach, but it is very beautiful, with fine white sand, coral and numerous species of tropical fish. The beach is framed by high cliffs Pelay, giving it a sense of privacy. In combination with the small number of guests, visitors feel as a "desert island".

Talu Nok Island is a limestone hill with a very broad and long cave, whose length is 50 pm. It serves as a tunnel, which allows it to sail by small boats. The ceiling of the cave is quite low, stalactites hanging down from a height of about 2-4 m above the sea level. Visit Khao Talu is included in most tours of Phang Nga Bay.

Panaca is located to the south-west of Koh Hong and it is known for its extensive network of caves where the depth of 50-150 m is the best to explore the cave kayaking. Panaca has beautiful scenery around the island, cliffs and beautiful stalactites are almost the same as in the caves of Koh Hong.

Write your Review on Phang Nga Bay - Spectacular Place in Thailand and become the best user of Bestourism.com 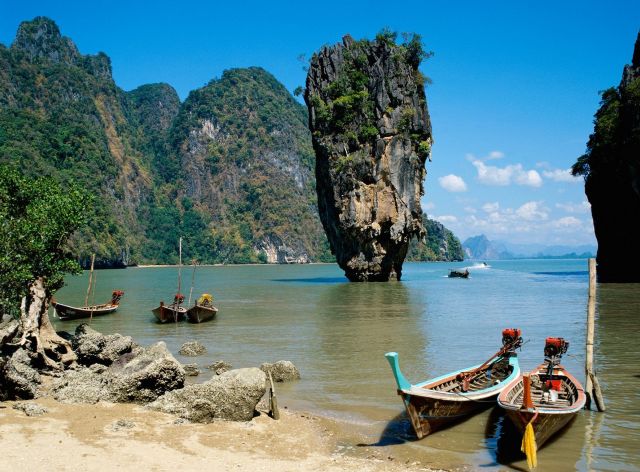 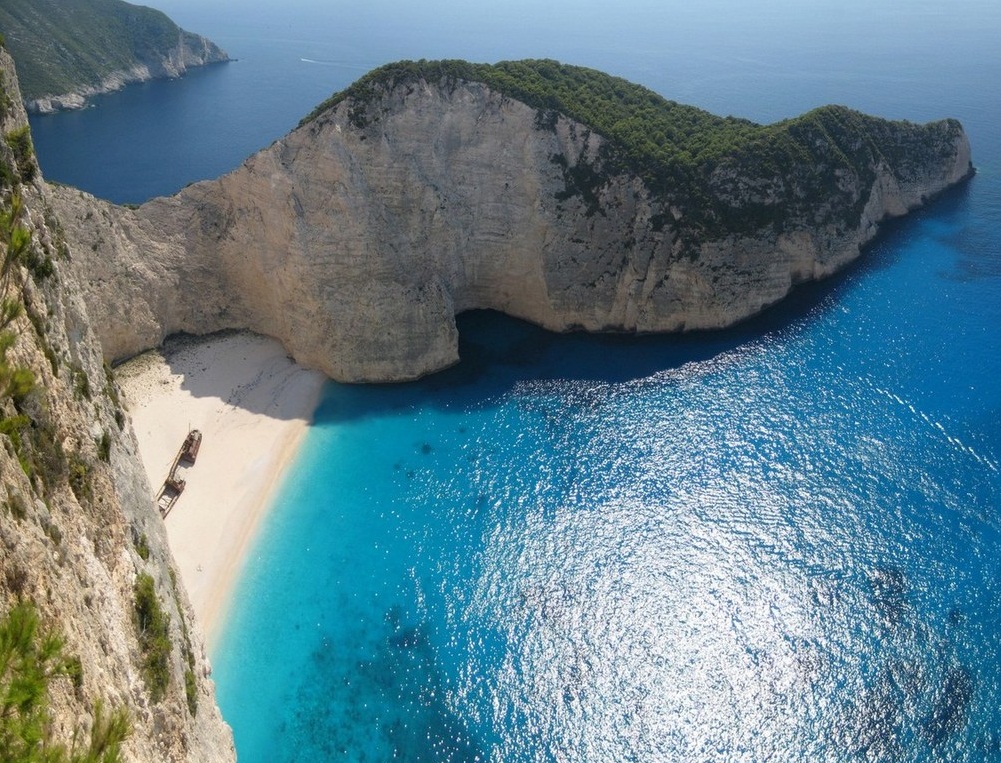 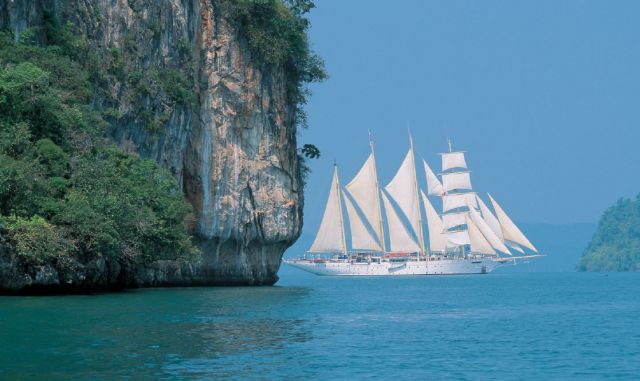 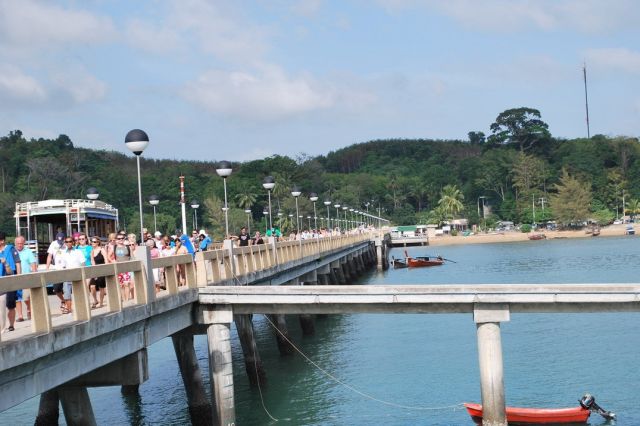