Bangkok - Venice of the East


With a population of over eleven million people, Bangkok is one of the most popular tourist cities in Asia. The heat, traffic jams, crowds never makes the smile vanishes from the faces of the Thais - this csn tell anyone who has visited this city. Its high-rise skyscrapers, traffic on the roads and intense heat, sometimes make a bad impression on visitors. This is one of the most cosmopolitan cities in Asia, with the famous temples and palaces. High humidity and temperatures promote the abundant growth of tropical plants - everywhere there are exotic orchids and fruit trees. The popular Thai cuisine is diverse and is available on virtually every street. For many, Bangkok embodies the quintessential Asian capital. Monks dressed in a dark orange, bright neon lights, Thai architecture, spicy dishes, colorful markets, traffic jams, and tropical climate are the most vivid impressions of the city. Thailand's capital leaves no one indifferent. This city is a dream and a nightmare at the same time for many tourists.

Over the years, Bangkok was a small fishing village near the Chao Phraya River. In 1782, the first monarch of the Chakri Dynasty, Rama I, moved the capital of Siam here and started the construction of te royal palace on the island of Rattanakosin . At the same time began the construction of the channels around the island. Like medieval ditches, these canals (Klong) served as a defensive barrier in the event of hostilities. Temples and palaces on the Rattanakosin Island were the only stone buildings, built on the land at that time. Ordinary people living in Bangkok, literally on the water: in boats, on rafts of bamboo dwellings. Only in early 1800 appeared the first houses built on land. Through an extensive network of canals, the main type of movement was a boat. Arriving in Bangkok, foreign diplomats and missionaries drew parallels with the Italian Venice, giving the city the name of the "Venice of the East." The official name of Bangkok is a member of the 167 letters by which he got into the Guinness Book of Records for the longest city name in the world. Thais prefer to use the name of Krung Thep (translated as the "City of Angels").

Most modern Bangkok is built on marshland. Because of the danger of epidemics of malaria and with the advent of motor transport, most built in the last century canals filled and built paved roads, skyscrapers and shopping malls. This has caused irreparable damage to the natural drainage system, which regulates the water level in the city during the annual rainy seasons. Therefore, it is difficult to call Bangkok the "Venice of the East", but the river and the remaining channels still continue to play an important role in the daily life of the city. Bangkok began to develop rapidly after the World War II. Beginning in 1980, it became the engine of the economy, the spiritual, cultural, political, commercial, educational center in Thailand, as well as one of the most cosmopolitan cities in Asia.

Bangkok is the 73rd largest, and the seventeenth to the highest city in the world (registered more than 1,000 skyscrapers). Continuous downpours during the rainy season leads to frequent flooding, as the city lies at an altitude of two meters above sea level. Bangkok is slowly sinking back into the marshy floodplain, where it was founded over 200 years ago. Global warming of the planet increases the level of the oceans and the effects of seasonal flooding every year represents a growing threat. There are fears that the capital of Thailand will plunge into the water by 2030.

Tuk-tuk has become one of the most recognizable features of Bangkok, without which is difficult to imagine the appearance of the capital of Thailand. This three-wheeled scooter was the most popular way to get around the city before the construction of terrestrial systems (BTS) and underground (MRT) station. Arising out of the old times rickshaws during the Second World War, the tuk-tuk is basically a rickshaw, but equipped with a small engine. It is easily recognizable by the characteristic noise and stifling smell, a tricycle scooter incredibly pollutes the air. Travel tuk tuki serves as one of the most popular means of transportation in Bangkok, 5-10 minutes of travel is enough to get an idea about this kind of transport and to know the color of the Asian metropolis. Sometimes it is possible to travel by tuk-tuk for free, if you are willing to visit the shops of clothes and jewelry to tourists (owners of tuk-tuk give coupons for fuel and raised fees for customers).

Tour of the channels under the awning of a wooden boat-taxi is an alternative way to explore the sights of Bangkok . Most of these tours begin on the east bank of the Chao Phraya River and pass by the glittering gilded temples and built shacks on the banks of canals. During the travel channel you will witness scenes of everyday life of local residents: Thais bathe, wash their clothes and sometimes throw them in the trash. This tour demonstrates the striking contrasts of the city: the old temples of Bangkok, there are a number of new residential areas and the prestigious five-star hotels, with the crumbling hovels are modern skyscrapers.

Bangkok's nightlife has a reputation as vicious, which greatly contributed to the popular Hollywood comedy "Bachelor Party 2: From Vegas to Bangkok" (The Hangover: Part II), focused on bachelor party debauchery. Some believe the war in Vietnam caused the transformation of Bangkok to the city of delights for the American soldiers who sought recreation here, others argue that modern free Thai customs are connected with the peculiarities of the history of Thailand. Thai or otherwise, Bangkok is well known for its go-go bars and prostitution associated with it. Prostitution is illegal in Thailand, but in practice the law is rarely used and brothels in the city is a widespread phenomenon. A huge number of prostitutes are working in massage parlors, saunas and hotels. Go-go bars aimed directly at attracting foreign tourists. They close around 01:00, but there are many clubs that break the law and stay opened until dawn. They are not hard to find, taxi drivers are well aware of all the institutions and are interested in this kind of customers, since they get a commission from the club owners.

Thailand is a very tolerant state in relation to people with gays, lesbians and transsexuals. All these contributed to the popularization of gay tours to Thailand and Bangkok is often referred to as "the gay capital of Asia." In addition to the capital, gay pride parades are held annually in Pattaya and Phuket . The first gay pride parade was held in Bangkok in 1999 and since then it is usually conducted annually in late October or early November.

Forty years ago, Thai food was virtually unknown outside Thailand. Since then it has gradually gained many fans and has gained popularity in many countries around the world. Bangkok has as many as 50,000 points where you can eat. Cafes and restaurants offer not only Thai food, but also a wide assortment of the most popular international cuisines. Prices are high by Thai standards, but cheap by international standards.

Street food in Bangkok is considered one of the most delicious in the world. For a long period of time the city has attracted migrants from neighboring countries in Asia, so its street cuisine is a blend of Thai, Chinese and Malay cuisine, reflecting a wave of immigration of the population. Thais have a habit of dining in the street and street food is well suited to them. On almost every street in Bangkok you can see the street tray, offering a slightly sweetish pasta noodles, rice noodles, omelettes, popular in the north of Thailand's Khao Soi (noodle soup), spicy soup tom yam kung. All those wishing to offer courses are taught the fundamentals of Thai cuisine. The street Khao San Road (Khao San Road) is famous for selling food from insects. Dishes prepared from scorpions, beetles (water beetles), grasshoppers, crickets, bamboo larvae, the larvae of flour Khrushchev. Bangkok visitors are struck by a large number of stray dogs in the streets. Dogs live in packs, free to roam throughout the capital of Thailand and collected in those places where they regularly are fed by the residents and street food vendors. In a city with a population of ten million inhabitants, there are, according to various estimates, more than 300,000 stray dogs. Homeless dogs in the streets largely escaped the sad fate of the animals of other large cities in developing countries due to the Buddhist traditions that prohibit unnecessary killing of any living creature.

According to the World Meteorological Organization, Bangkok is one of the hottest cities in the world. Located at 14 degrees north of the equator, the temperature at any time of the year exceeds 30 ° C. The optimal time visit is from November to February. March and April are very hot, sometimes temperature exceeds 40 ° C. Then comes the rainy season, which lasts from May to October. Expect heavy showers and thunderstorms, accompanied by floods throughout the city. The heaviest rainfalls are in September and October, so that in these months is better to avoid visiting Bangkok.

Write your Review on Bangkok - Venice of the East and become the best user of Bestourism.com

Maps of Bangkok - Venice of the East 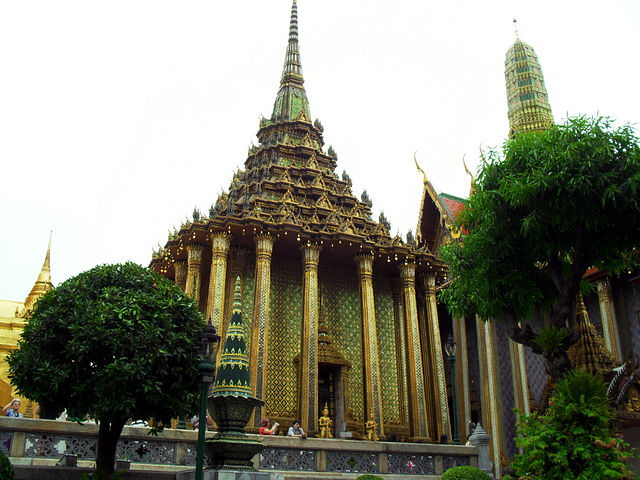 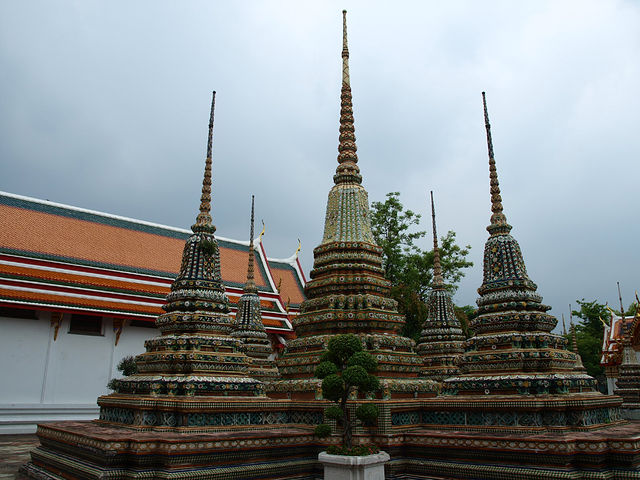 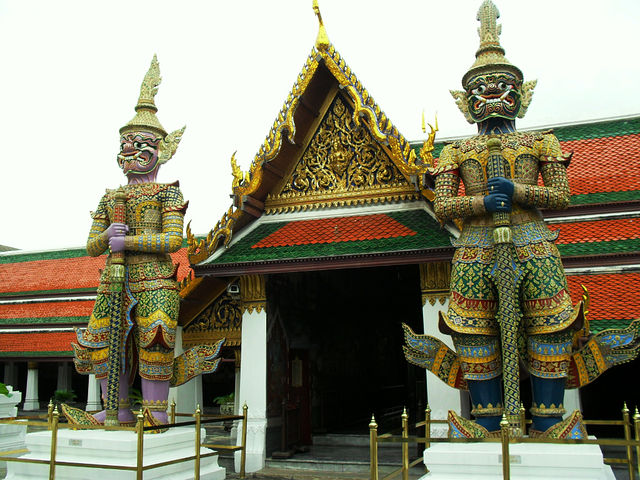 Bangkok - Venice of the East - Worth visiting temple 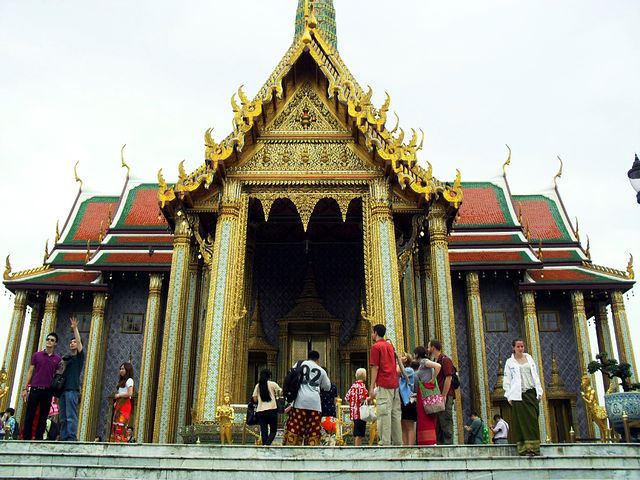 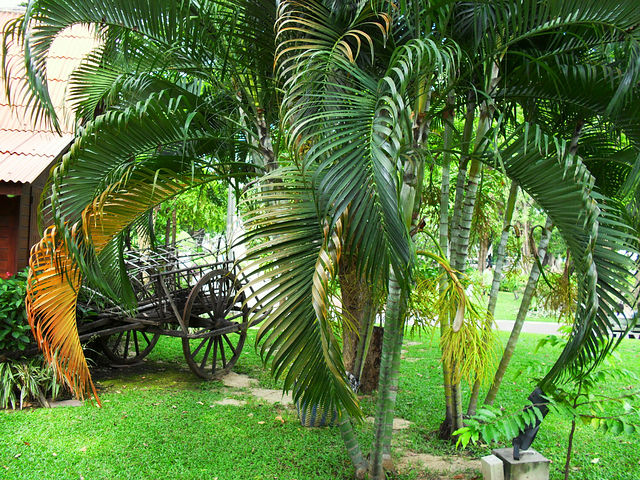 Bangkok - Venice of the East - Abundant growth of tropical plants 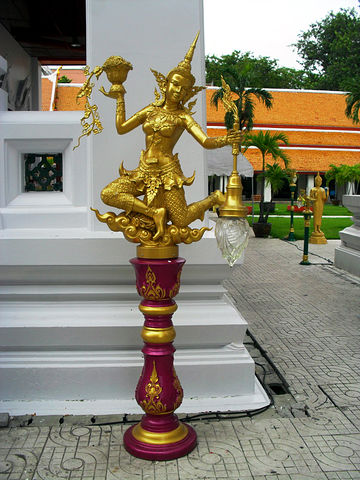 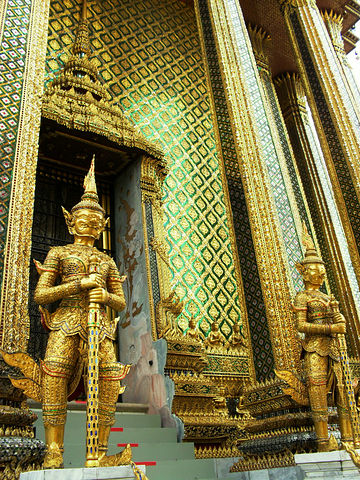 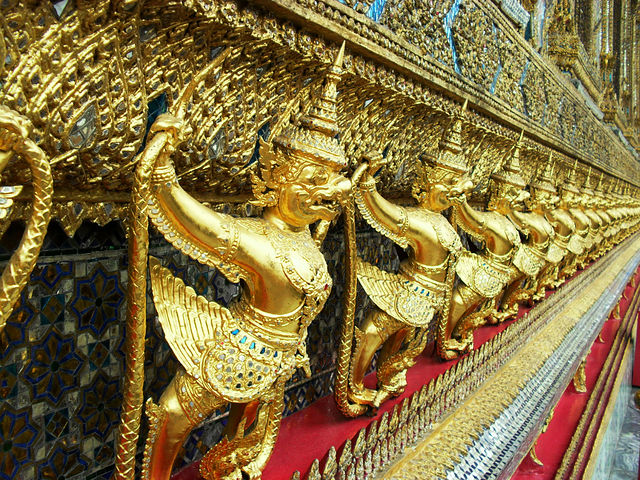 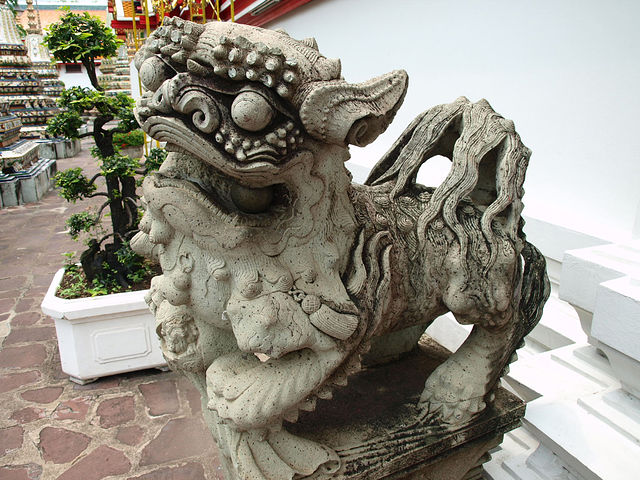 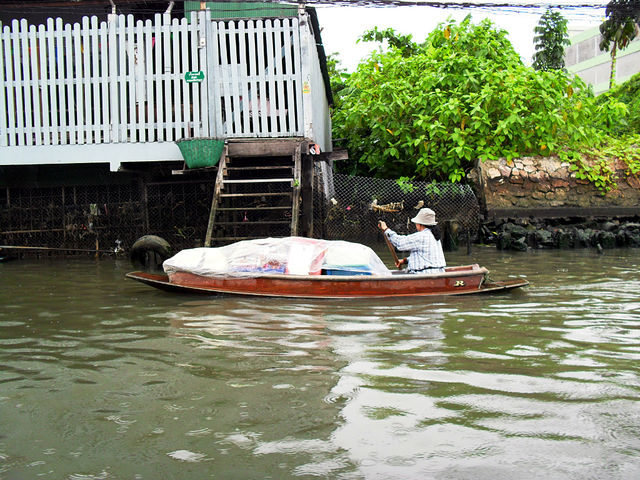 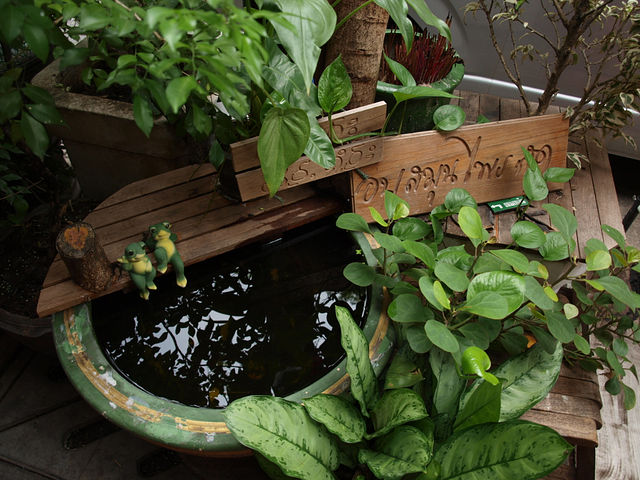 Bangkok - Venice of the East - Inscription 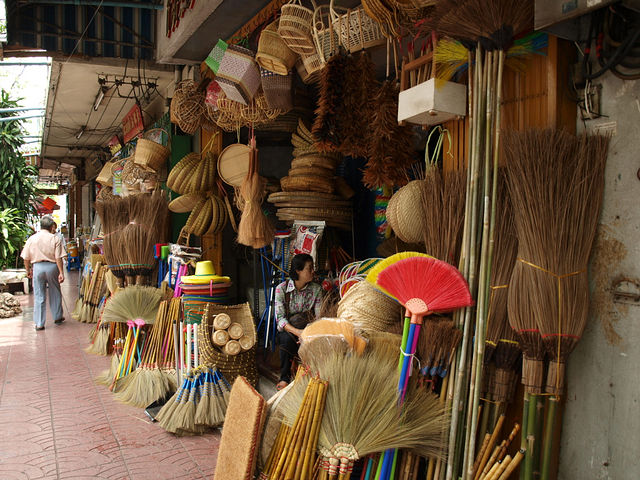 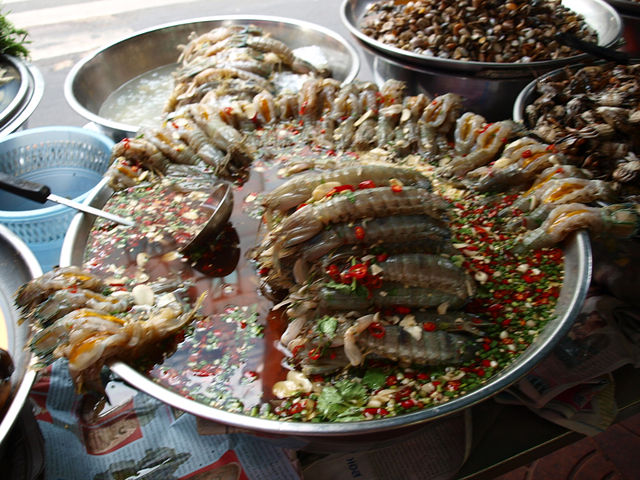 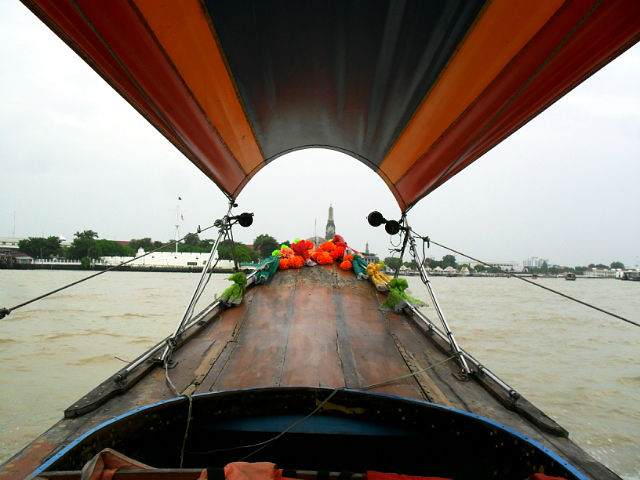 Bangkok - Venice of the East - Through the old Bangkok 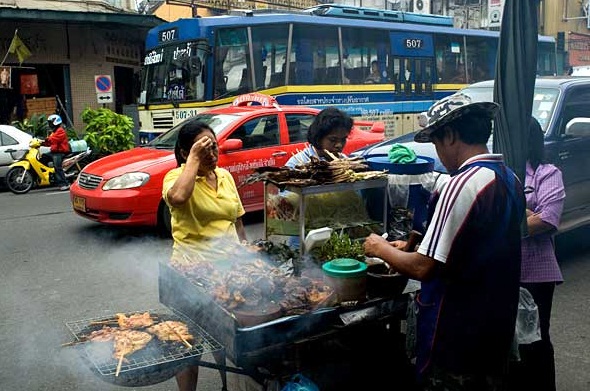 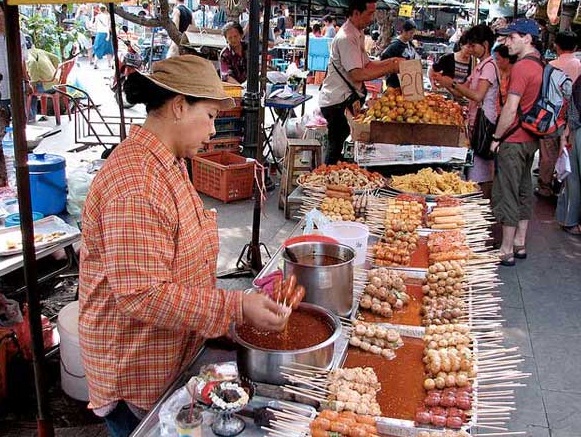 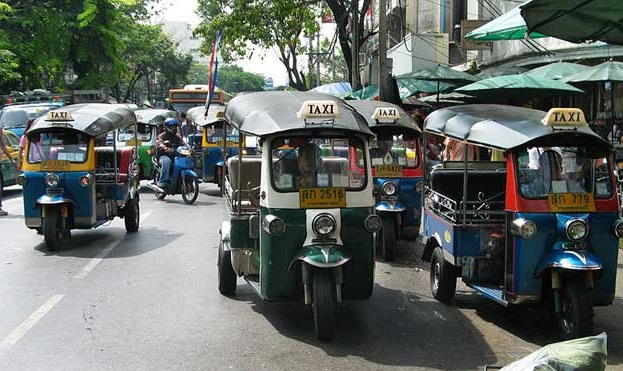 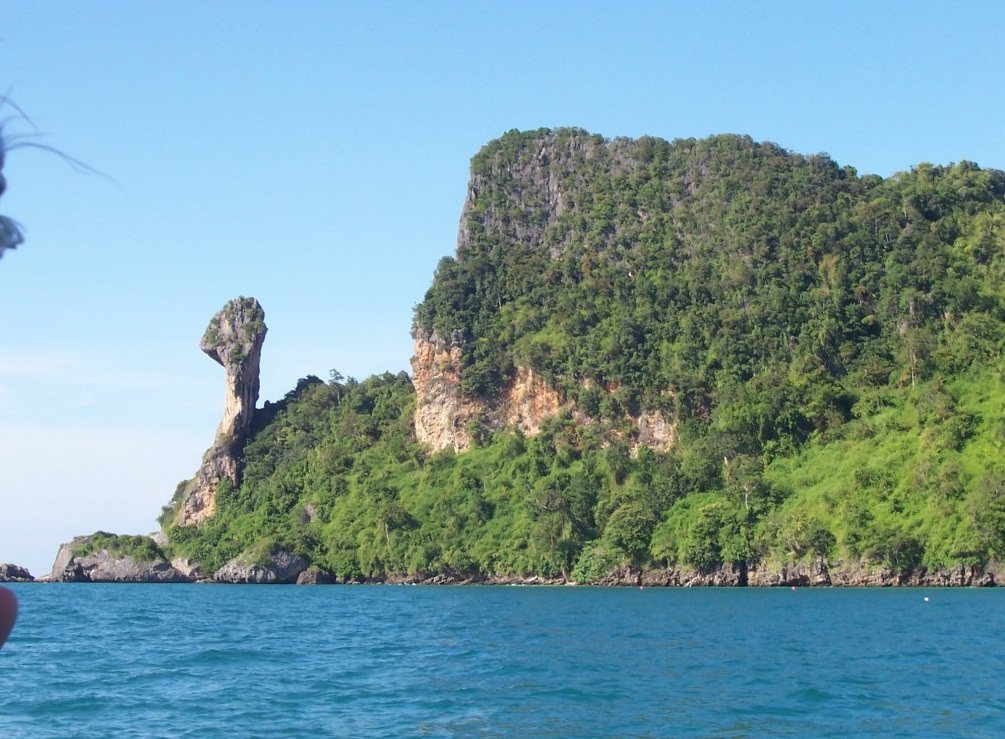 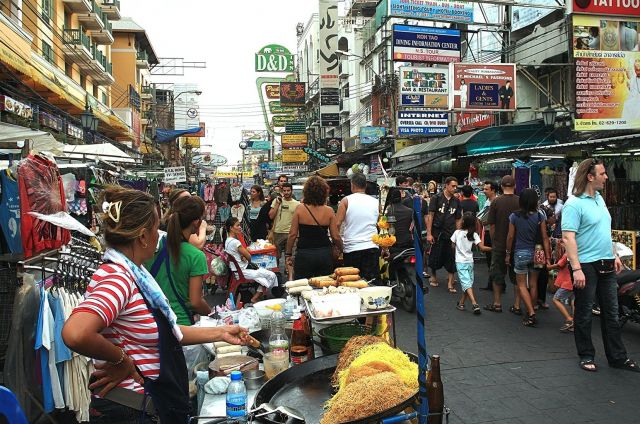 Bangkok - Venice of the East - Popular tourist city in Asia 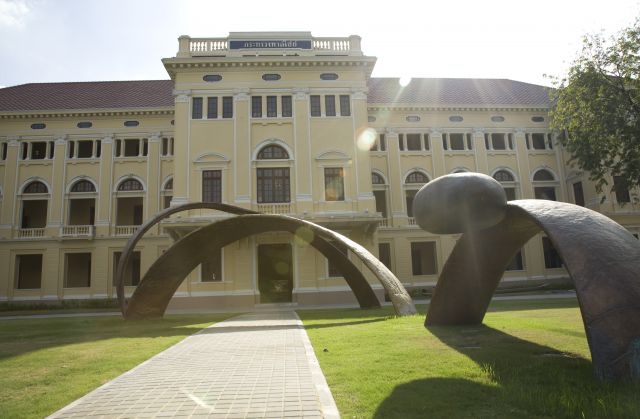 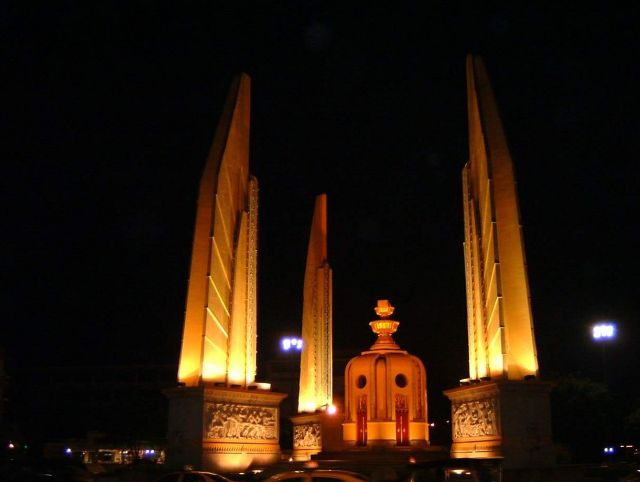 Video Bangkok - Venice of the East