Udaipur - Venice of the East


If you were in India you have heard of Udaipur, one of the most beautiful cities in the northern state of Rajasthan. The impressions from the first to explore the city remain in the memory of a lifetime: Lake Pichola, spread palaces, mansions, Ghat and the most famous landmark - the Lake Palace - altogether "floats" in its very center. Beautiful palaces of the city show a luxurious lifestyle of its former rulers. The temples differ in their monumental architecture. The lakes and the parks help to relax from the hustle and the bustle of the city. Lakes, small islands and mountains covered with greenery set it apart from other arid cities of Rajasthan. During its existence, it has earned many epithets: " The White city of Udaipur" (many buildings painted in white color), "Kashmir, Rajasthan," "Venice of the East", " The City of Dreams", " The City of Lakes". Built in the surroundings of five artificial lakes and peaks covered with green Aravalli, " The City of the Rising Sun" is often described as the most romantic place in India . In 2009, readers of U.S. magazine Travel and Leisure recognized Udaipur as the best city in the world to travel.

Tourists come to this charming city throughout the year. Most visitors arrive in Udaipur to see the lakes and the palaces, which gave the name "Venice of the East." This is not the first city which claims this title. Bangkok is also called the Venice of the East. As well as Suzhou in China, Aer Camper in Brunei and Basra in Iraq. But in terms of visual perception "Rajasthani Venice" has no equal. Here there is the famous Rialto Bridge, a vast network of canals and gondolas in Venice, but a number of exquisite palaces on the lake, reflected in the green water of the lake and create the same aura, for which Venice is famous.

Udaipur, the capital of the legendary ruler of Mewar, was built by Udai Singh II in 1559. The massive walls of the previous capital Chittorgarh had been unable to resist the enemy and after the third major siege Udai Singh II decided to seek a safer place. He asked the advice of a holy sage, at the option of a safe heaven for his new capital. Uday Singh, the elder assured that his new city will never be conquered on the shore of Lake Pichola. With the blessing of the holy sage, Uday founded his new capital and the city became known as Udaipur. Uday built the first palace on the shore of the lake, later turned into the largest palace complex in Rajasthan. Udaipur is famous not only for its palaces, temperate climate and beautiful scenery, but also for a fierce struggle for independence with the most powerful country at that time in the world, the Mughal Empire. The city was once a powerful principality of Mewar and is proud of the fact that only one of seven major Rajput principalities managed to survive and do not obey the invasion of the Mughals. In addition to the Mughals, Udaipur waged a bloody war with the Turkish, Afghan and Tartar conquerors and conquered only the powerful British East India Company in 1818. Fateh Singh, who ruled the city was the only Indian maharajas who refused to visit the Delhi Durbar ( the assembly devoted to the coronation of the British monarchs as emperors of India) in 1911, despite the fact that the British recognized him as the head of his principality. When the Prince of Wales, Edward VIII visited Udaipur in 1921, Fateh Singh refused to accept it, citing illness.

The "City of Lakes" in 2005 survived hard times. The unprecedented drought dried up its beautiful lakes, Udaipur and left without the usual crowds in the streets of tourists. Nature relented over the city and the drought that left without water lake Pichola for several years, went down in history. The lakes are filled with water again, but not controlled by modern buildings, the terrible traffic on the roads and the huge crowds of tourists make the city so much romantic. Despite this, Udaipur is an interesting place to visit and although most of the sights can be visited for a few days, many tourists stay here for a week in order to visit other interesting places located in the vicinity. In contrast to Jaipur , the capital of Rajasthan is too crowded, Udaipur better preserved its original charm. Most tours are concentrated around Pichola Lake and all the main attractions can be worked around by foot.

Udaipur City is best known for the vast palace, built by Udai Singh II in the 16th century as the new capital of an independent principality. Built along the banks of Lake Pichola, the palace complex is hidden behind a vast facade of buildings. So apparently it looks like a fortress. The palaces were built over a long period of time, since 1559. The complex consists of 11 palaces, 7 entrance gates, a museum and other buildings constructed entirely of granite and marble. Inside the palace complex are interconnected zigzag areas. The City Palace is often called the city within a city because of the large number of buildings, it is considered the largest of its kind in Rajasthan. A unique feature of this conglomeration of buildings is a mix of Rajasthani architecture, Mughal, medieval, European and Chinese. The upper terrace offers great views of the lake and the city of Udaipur.

If you are a fan of James Bond you have to remember the floating palace in the movie "Octopussy". The Palace, "Octopussy", unlike the movie, is more than 260 years. The Lake Palace was built in 1746 on an island in Lake Pichola. The cold white marble and mosaic made it one of the instantly recognizable sights of Rajasthan. During the Sepoy rebellion in 1857, the ruler of Udaipur Swarup Singh sheltered from the massacre of Europeans rebels. To this end, he destroyed all the boats of the city, so the rebels could not get to the island. Time and weather took their toll and at the second half of the 19th century, the palace came in full decline. The overhaul and the conversion of the former palace into a luxury hotel helped to prevent its total destruction. The Lake Palace was voted as the most romantic hotel in India and is now one of the most famous and expensive hotels in the country. It regularly appears in the list of the top ten hotels in the world and is considered one of the most beautiful.

Jag Mandir Palace Building on an island in Lake Pichola was started in 1551 and was completed during the reign of Jagat Singh I (1628-1652). The rulers of Udaipur Palace, used as a place of recreation and entertainment. During the uprising in 1857, Swarup Singh (1842-1861) saved from certain death to many Europeans, mostly women and children who have been granted asylum in the palace of Jag Mandir. Sepoy Mutiny is sometimes called the Indian mutiny or the first war of independence against British rule. The Jagdish Temple One of the most popular tourist attractions in Udaipur Hindu Jagdish Temple is built on a high terrace in 1651. The outer walls of the temple are decorated with ornamental carvings with scenes from the life of Krishna, the figures of the god Vishnu and dancing nymphs.

• Udaipur is mentioned under the name of the product Oodeypore in the best-known English writer Rudyard Kipling's "Jungle Book" as the birthplace of Bagheera (the black panther).

• Part of the James Bond film "Octopussy" was filmed in the city.

• Some of the scenes of filming British documentary series "The Pearl of the Crown" took place in Udaipur. The story of the last years of British rule in British India during World War II.

• Hollywood films and TV series were shot in Udaipur: "The train to Darjeeling'', '' Darjeeling Limited, "" Hot Night "," Dust and Heat "," Gandhi. " Many more films were shot in Bollywood.

• Udaipur is a popular destination for wedding newlyweds. Many celebrities, including movie stars, wealthy businessmen, politicians choose this city for weddings and parties.

• It is believed that the palace of Jag Mandir inspired Shah Jahan to build the Taj Mahal .

• In 2008 the Disney Studio took off in the film "Female cheetahs, one world."

Write your Review on Udaipur - Venice of the East and become the best user of Bestourism.com

Maps of Udaipur - Venice of the East 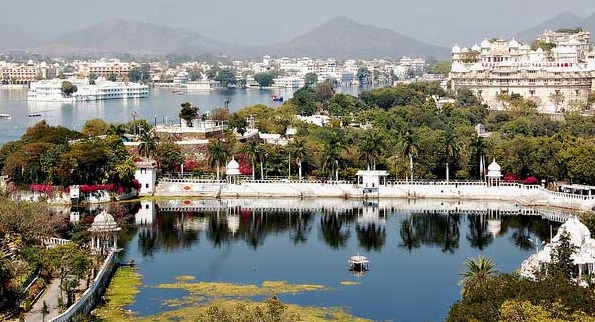 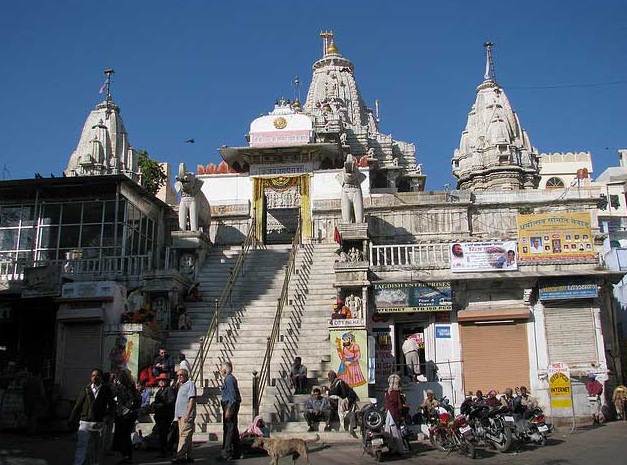 Udaipur - Venice of the East - The Jagdish Temple 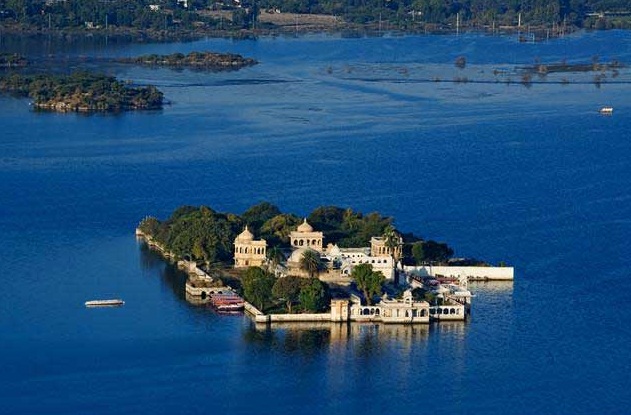 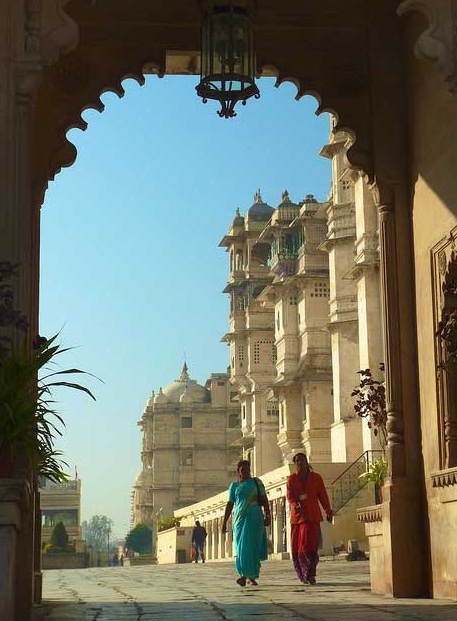 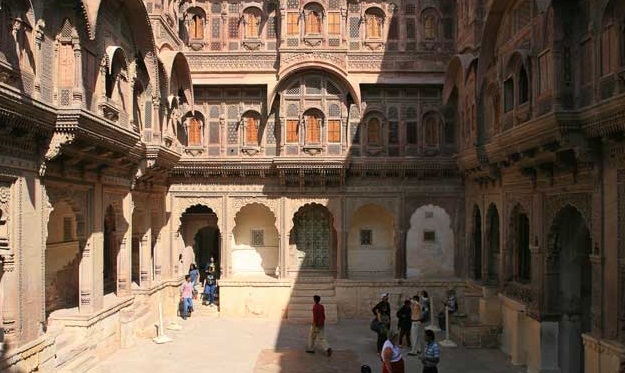 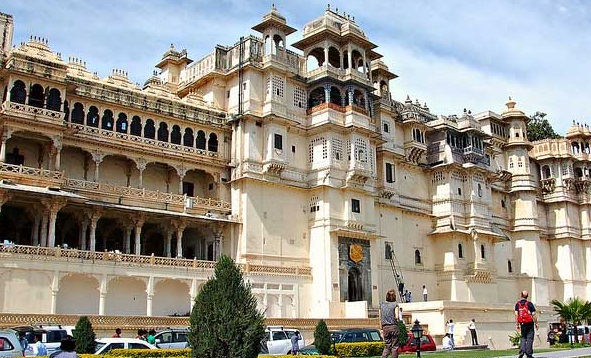 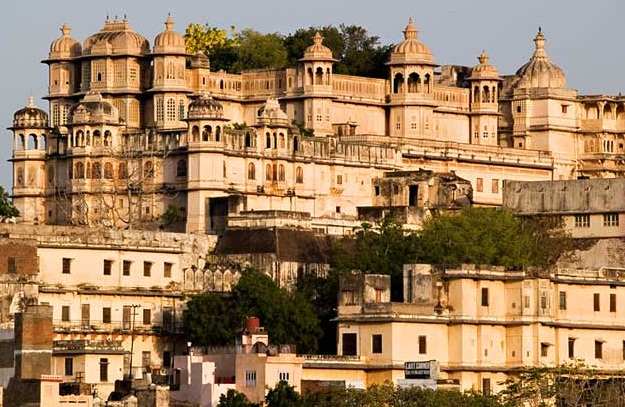 Video Udaipur - Venice of the East