Jodhpur - The Blue City of India


Jodhpur is one of the most interesting cities to visit in India, the ancient fortress and palaces which cannot but arouse admiration. Founded in 1459, this city is securely protected by one of the most impregnable fortresses in history, it has become almost the richest city in Rajasthan due to the convenient location on the trade route Delhi - Gujarat. Today, the second largest city in Rajasthan state looks no different from other Indian cities as noisy and dirty. But within the old walls where every building is painted in blue color, you will find a maze of narrow medieval streets and bazaars, in which life seems to have changed little over the past centuries. The most popular tourist centers in India are of the so-called "Golden Triangle" because of the richness of their culture and history.

The travel around the towns of the "Golden Triangle" begins in Delhi and continues in Agra and the state capital of Rajasthan, Jaipur. The large cities Radzhsthana are distinguished not only by name, but by the color " The pink city of Jaipur , "The Blue City of Jodhpur, " The White city of Udaipur . " From desert landscapes, ancient castles, palaces painted in different colors, the city of Rajasthan, the largest state of India, is deservedly of great interest to tourists. Approximately the same area as Germany, Rajasthan has the largest number of tourist attractions than any other Indian state thanks to the legacy of the Mughals and Rajputs (an ethnic group in India). Each of these memos is a unique window into the world of fascinating historical and cultural diversity of India. Yes, cities are noisy, dirty and poor, poverty can be shocking. However, the cultural attractions of Rajasthan is worth to make a trip here.

If you look down at Jodhpur from the high ramparts of the enormous fortress- Mehrangarh Fort, the eye catches the blue sea. All homes adjacent to the castle are painted blue. Through this painting, it was called " The Blue City". But why the locals paint their houses blue just to say, is impossible. Some believe that these houses belonged to the Brahmins, and blue colored houses emphasized the affiliation to the highest caste in India. Others believe that the blue color was used simply as a means of combating termites and other insects. Jodhpur is also often called the City of the Sun due to the bright sunny weather throughout the year. Few of the many ancient monuments of the state caused such a deep admiration for both the ancient fortress of Jodhpur, one of the largest and most powerful in India . Throughout its history it has never been conquered by force of arms. Founded in 1459, it became a bulwark of the Rathor Rajput dynasty, who considered themselves descendants of Rama from the famous Indian epic "Ramayana." Although the castle was originally founded in 1459 Dzhodhoy Rao, the founder of Jodhpur, the bulk of it was built during the reign of Jaswant Singh (1638-1678). The fortress is located in the heart of the city on the top of a high hill. Under the protection of its powerful walls (up to 26 meters) are among the most beautiful historical palaces of Rajasthan. Ramparts of the fort not only keep a few old guns, but also offer a wonderful view over the city.

The Fortress Museum has a rich collection of rare types of weapons: swords with handles of jade, shields, decorated with rubies, emeralds and pearls, having a weapon with gold and silver ornaments on the trunk. The museum has a collection of personal swords of many rulers of Jodhpur. In the old days Maharaja used elephants to overcome the steep hill on the way to the gates of the fortress. These days, anyone can benefit from the achievement of modern civilization, instead of elephants lift. Near the fort Jaswant Tada is a white marble memorial built in memory of the Jodhpur ruler Jaswant Singh II.

At the time of independence in 1947, in India were more than 550 principalities. Maharaja who ruled them had a luxurious and a lavish lifestyle, a large part of his wealth was spent on the construction of magnificent palaces. The Palaces of the Maharajas were not merely residences: many of the rulers took an active part in public life and often these buildings served as a place for receptions, handicraft production and deployment of soldiers. Many palaces are now historical landmarks and they do not come into disrepair, the owners turned their residence into luxury hotels. Unlike other tourist cities in the state of Rajasthan, the 'Blue City of Jodhpur, "has so many hotels, but Umaid Bhawan is well-known. This magnificent palace is simultaneously one of the main attractions and the best place to stay in Jodhpur: 347 rooms, including a cinema, Umaid Bhawan made the largest private residence in the world at the time of completion, a vivid testimony of Rajput Maharaja of extravagance during the British Raj. It took 5000 workers 15 years and the time to complete the construction of the building, which became one of the best examples of Indo-Saracenic architecture. Except for the massive dome, rising to a height of 32 meters, the building is completely symmetrical. Ordered furniture in Art Deco style and accessories were sunk by a German submarine during the World War II on the way from Britain to India. Then Maharaja engaged the services of the Polish designer Stefan Norblin. He created the interiors of the palace made in the popular art deco style at that time. Today the palace is divided into a private residence of the Maharaja family, a luxury hotel (since 1972) and a museum with a collection of paintings, weapons and jewelry belonging to the Maharaja. Tourists can take a guided tour and explore the palace (except the private family residence Maharaja). The bulk of the building functions as a five-star luxury hotel. The eclectic mix of Art Deco style and thousands of years of the Hindu architectural tradition is a characteristic feature of this building. According to the English writer Joseph Rudyard Kipling, Mehrangarh Fort was "the work of fairies, angels and giants," according to an unknown poet, Umaid Bhawan represents "a handsome warrior, stretching his hands to embrace love." Festivals and fairs, music and dance are an indication of the rich cultural traditions of Rajasthan. The air is filled with festive fervor in those days, the streets are transformed into a delightful spectacle. The best time to visit Jodhpur is during one of the many colorful festivals, such as Gaura (around July or August).

Gaura is the most popular, most colorful and the most important holiday for the people of Rajasthan. It represents the perfection of love and family. Unmarried women worship Gaura to bless them a good husband and married women do it for health, longevity of their husbands and happy family life. Festivities continue for 18 days. The solemn procession of beautifully decorated elephants, camels, horses are accompanied by dances and songs. During the celebration of Gaura, women and girls, armed with clubs, let them deal: beat all men without distinction and men, in turn, cannot give change. Beating men is a symbolic ritual that is beaten, not putting a lot of power well, except a couple of bruises. At the same beat go all men in succession: young and old, local and tourists. It is believed that when a young girl hits the boy with a stick, she thereby demonstrates her care and "beating" someone means to marry very soon. Thus, women in Jodhpur are trying to find happiness miraculously.

Sadar, a bustling market near the clock tower in the center of the city consists of many narrow alleys and small shops. Here you can buy traditional textiles, jewelry and souvenirs. Labyrinths of the Old Town are much more interesting than in Jaipur , but also the streets of this medieval fortress and visiting Mehrangarh Fort and Umaid Bhawan Palace is very interesting , there are no special attractions that can keep for a longer stay. Most people use Jodhpur as a starting point for a trip to Jaisalmer and Udaipur . Located in the geographic center of Rajasthan state, it is convenient to travel to other cities in the region.

Write your Review on Jodhpur - The Blue City of India and become the best user of Bestourism.com

Maps of Jodhpur - The Blue City of India 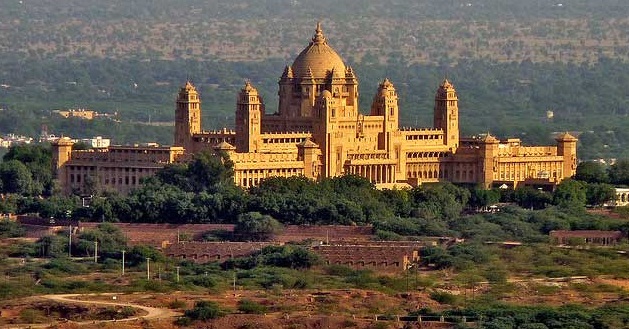 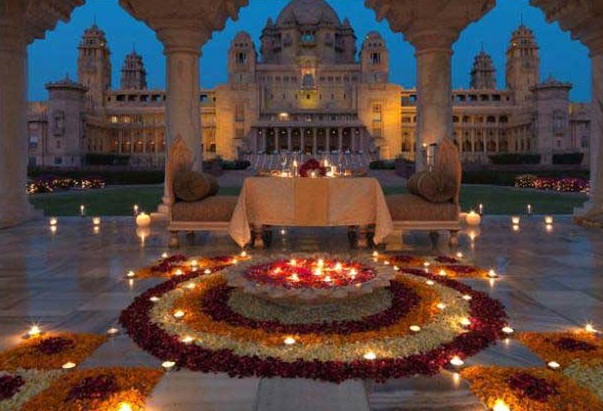 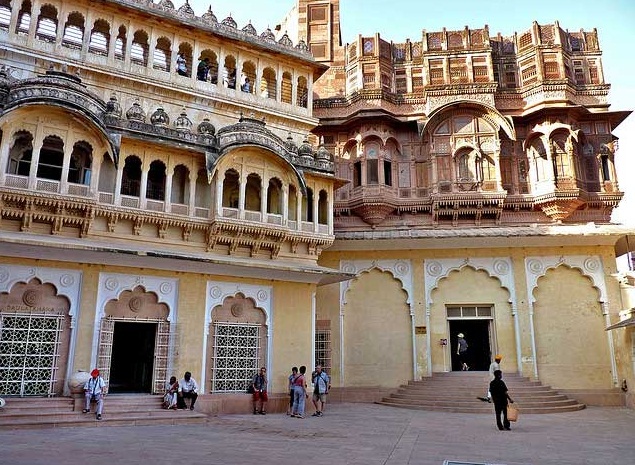 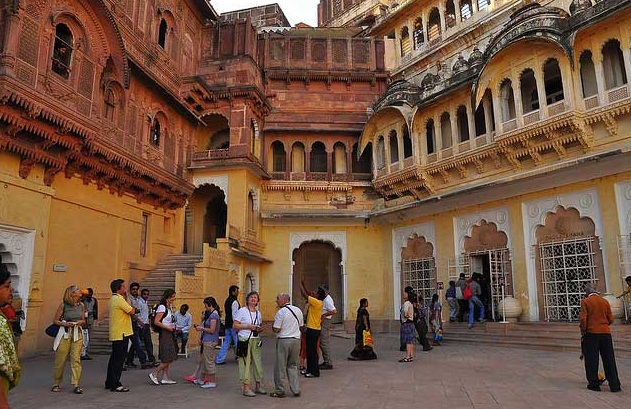 Jodhpur - The Blue City of India - Worth visiting place 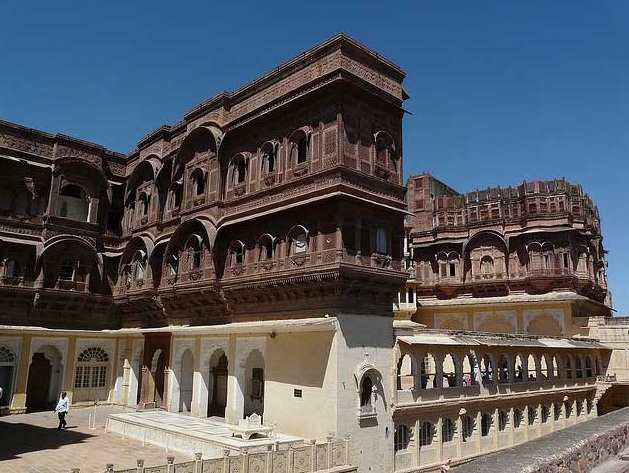 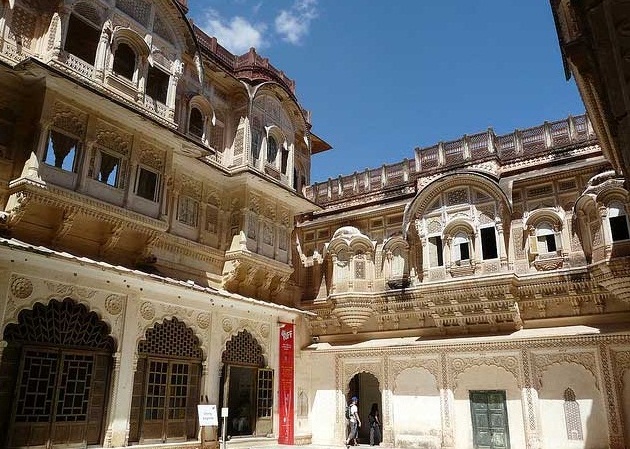 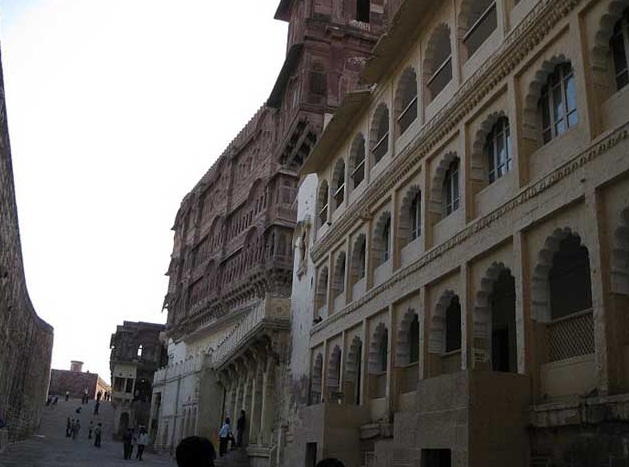 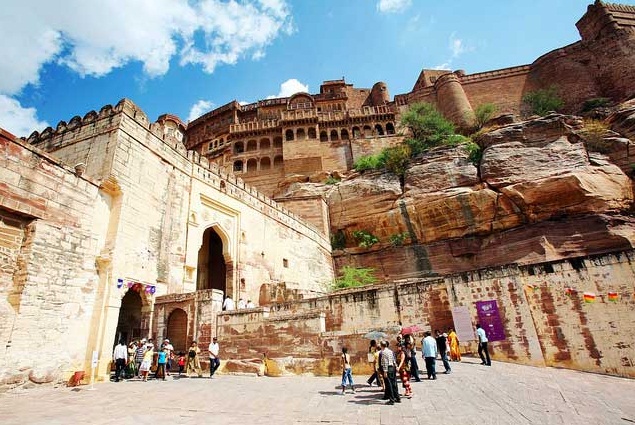 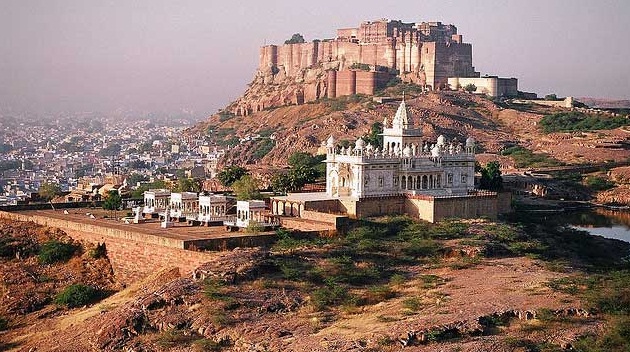 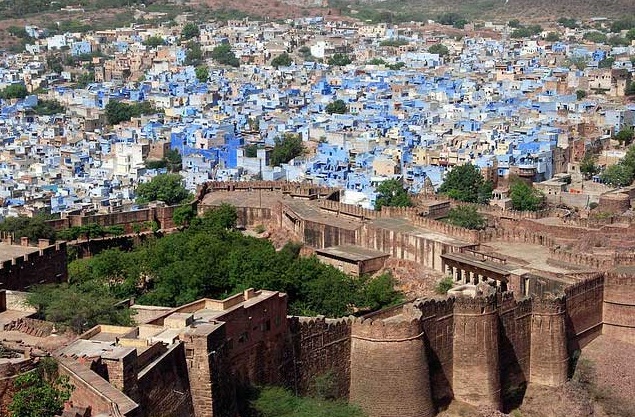