Destinations / The Best Places to Visit in Calabria, Italy / Croton


Croton is a town in Calabria on the Ionian Sea, founded by the Greeks in the VIII BC. According to the legend, the city was founded on the advice of the Delphic oracle, and its name the old Croton was in honor of the king's son Aeacus of Aegina Island - Croton.

The glory and the fame of the city grew rapidly, the cause is the healthy climate, the beauty of the local women and the strength of men. The proof of this is a native of this place - Milo of Croton - an athlete who became a winner at the Olympics and could pick up a bull on the shoulders. Crotone was known for its doctors, among whom Demoked, a friend of Pythagoras and Alcmaeon. Pythagoras himself moved to Croton and founded a school of philosophy in 532 BC. In Croton, Pythagoras found many followers of his teachings and occult philosophy. He taught peace and self-discipline. Pythagoras was a vegetarian and believed in the therapeutic value of music, believed that immorality is a disease of the soul and virtue was rewarded with the transition of the soul after death into a higher form. He believed in the transmigration of the souls and in that incarnation, a process of purification of the soul. The man who entered the ranks of the Pythagoreans held the ceremony of initiation. He was given the signs by which the Pythagoreans recognized each other. The disciples of Pythagoras formed a brotherhood dedicated, consisting of selected castes like-minded people that deify his teacher and founder. This order actually came to power in Croton, but because of anti Pythagorean feeling at the end of the VI. BC. Pythagoras had to retire to another Greek colony of Metaponto, where he died. In 510, Croton participated in the war with the legendary Greek city of Sybaris and emerged victorious. In the VI - VII centuries Croton on Athenian tyranny spread Kilona. But in 383 BC the city fell under the sway of the tyrant Dionysius I of Syracuse. In 277 BC the Romans conquered Croton and in 194 BC became a Roman colony. After the fall of the Roman Empire , the city became Byzantine. In 870 it was sacked by the Saracens. In 1284 the Aragonese conquered Croton. In the XVI century the Spanish King Charles V bestowed privileges to the city and built a port. In 1541 the castle was restored, now known as the Castle of Charles V. In the XVI century the city became known as Kotrone. It was only in 1928 when it changed its name to the modern Crotone.

The historical center of Crotone was formed during the Middle Ages, surrounded by a stone wall with a weave of narrow streets that lead to the Duomo - the Cathedral, built in the IX. The facade of the cathedral is in the neoclassical style. In the XVI century the Cathedral was reconstructed inside the Byzantine picture of Madonna (Black Madonna), which was brought from Palestine. In honor of the Madonna, May 30th is a holiday. The church of San Giuseppe in 1719 is in Baroque style. Inside there are three naves of the church and an altar made of marble and wood statues, among which the statue of St. Giuseppe, Saint Gregory and Saint Nicholas of Bari. The Church of God (Immacolata) was built in 1500 with a neoclassical facade. Inside there is a nave and frescoes on the life of Mary. The crypt contains the relics of monks. The Church and the Monastery of Santa Chiara was founded in 1400. The church is decorated with frescoes (the beginning of XVIII c.), Sex - Neapolitan majolica hand. The facade is decorated with graffiti. The Church of the Holy Apostles Peter and Paul was founded in 1460 at the monastery. In the XVIII century it was rich and a well appointed church with six altars. But after the earthquake in 1783 the monastery was abolished. The Church has come into disrepair and traces of frescoes are still visible here. On the hill in the old town is the castle of Charles V, which was built in 840, during the attacks of Saracens. But in the XVI century Charles V rebuilt the castle. Now here is an archaeological museum. At the base of the castle is a polygon with two towers - the tower and the tower of the Assistant Commander. In Croton along the Ionian Sea is the embankment via Cristoforo Colombo and viale Gramsci. There are bars, restaurants, in the evening the promenade is filled with beautifully dressed people. Not far from Crotone (10 km) on a picturesque promontory at a place called Capo Colonna is a Doric column, the only thing that remains of the largest temple of Magna Graecia - the temple of Hera lacinia (VI cent. BC), Queen Heaven. The temple has a classical form of inherent Greek temples, surrounded by 48 Doric columns, 8 meters high and covered with a marble roof. The temple complex consists of several buildings, now they are only on the ruins.

Where to eat in Crotone:

Here are a variety of pizzas with seafood, fish, meat and vegetables, as well as dishes with potatoes and other dishes.

The restaurant is situated on the main promenade that goes straight into the sea. It has a beautiful view, seafood, fish, pasta and pizza.

• Not far from Crotone the excellent wine Ciro is produced: Ciro (the very thing which according to legend, was awarded to the Olympic athletes), Melissa, and more. One of the most famous wineries Librandi, wines can be found in almost any store of the city. But it is better to buy wine in the wine cellar , because there are better met the conditions of transport and storage of wine.

Wine cellars of the city:

• Marino. Via Nicoletta, 3 (close to the historic city center). Large selection of wines (over 800 titles).

• Squillace Vincenzo. Via Venezia 80. This wine bar is easier, but the owner will be glad to talk with you and try to pour some of the great table wine barrels for free.

Write your Review on Croton and become the best user of Bestourism.com 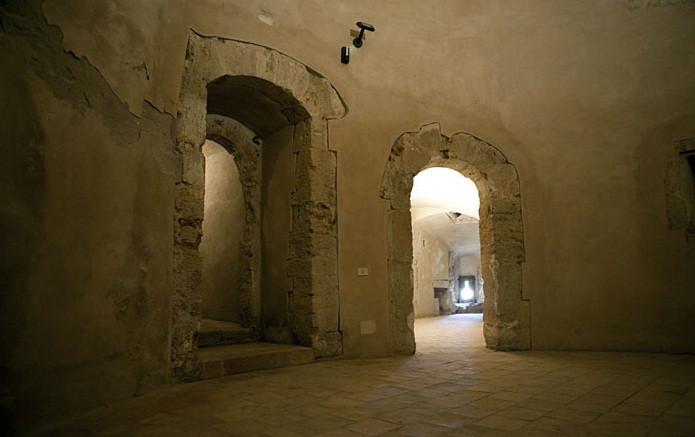 Croton - Interior of the castle 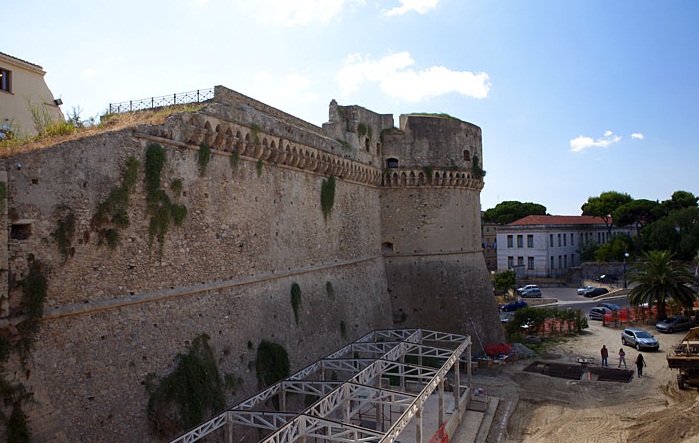 Croton - The castle of Charles V 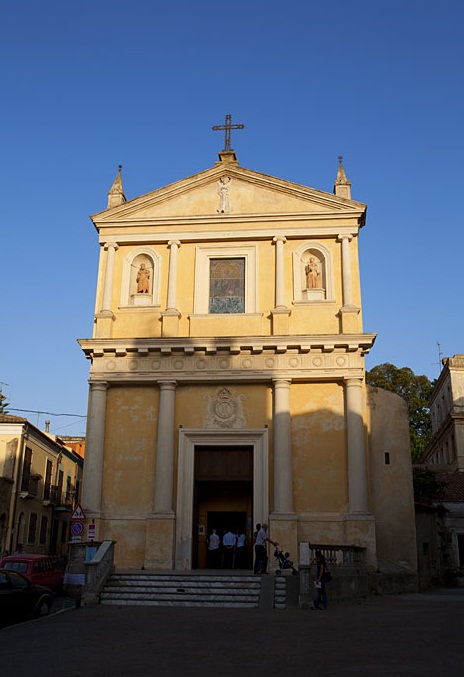 Croton - The Church of God 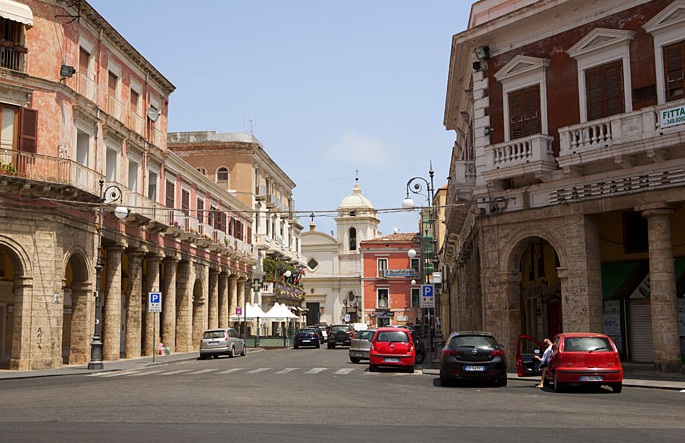 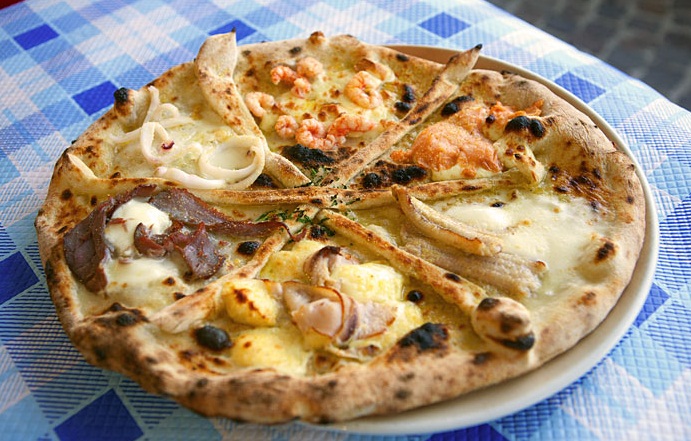 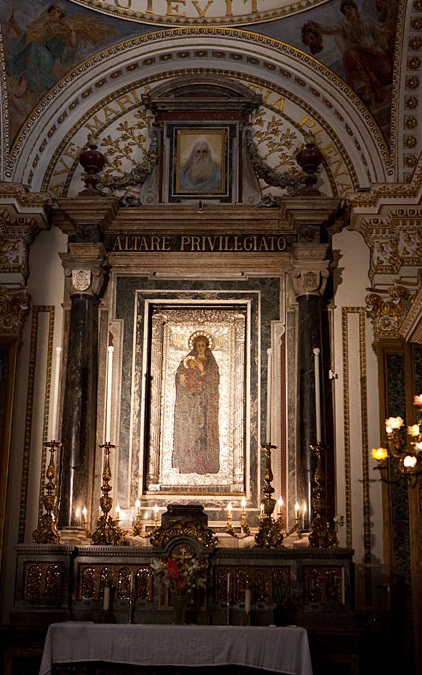 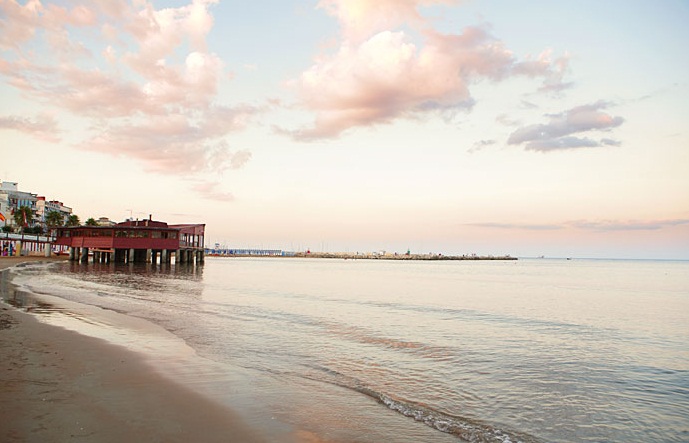 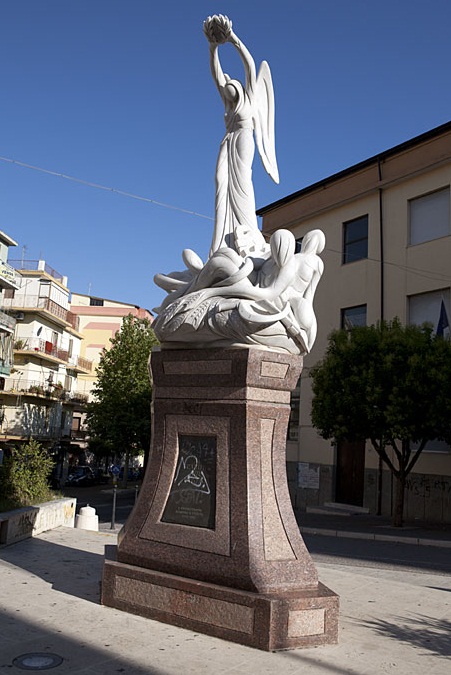 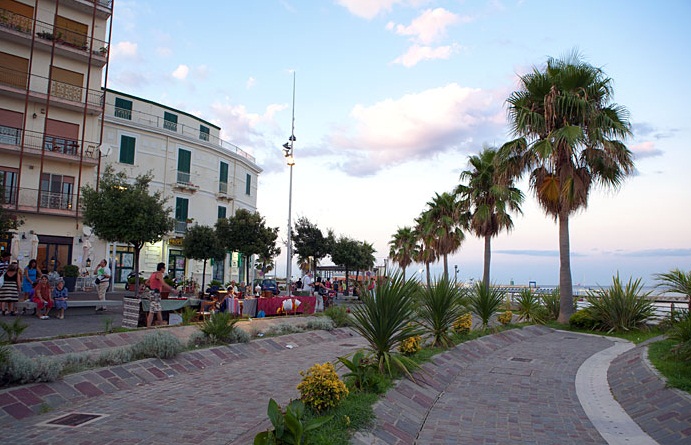 Croton - Quay of the City 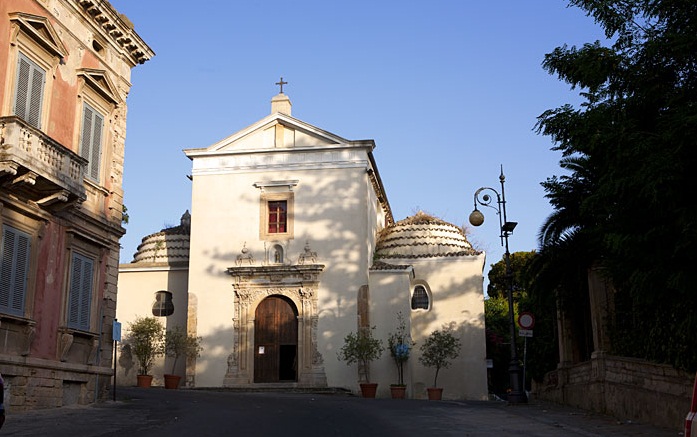 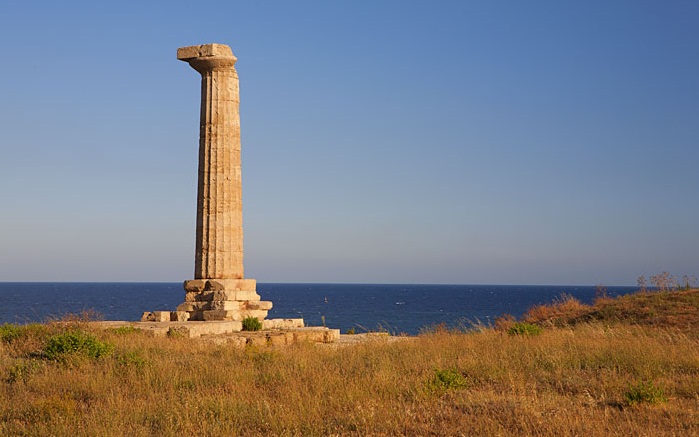 Croton - The Temple of Hera Lacinia 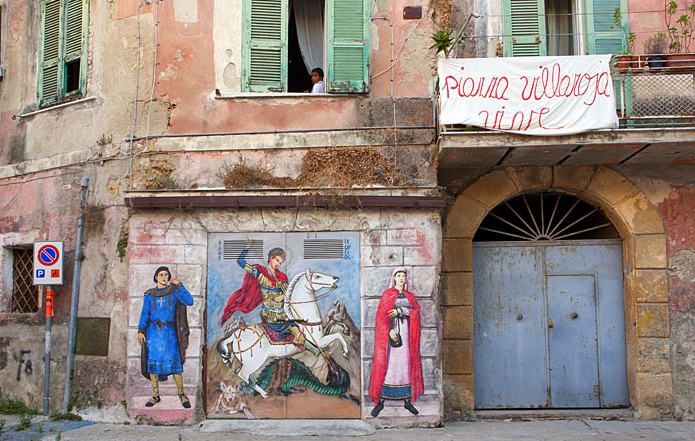 Croton - The street of the Old city 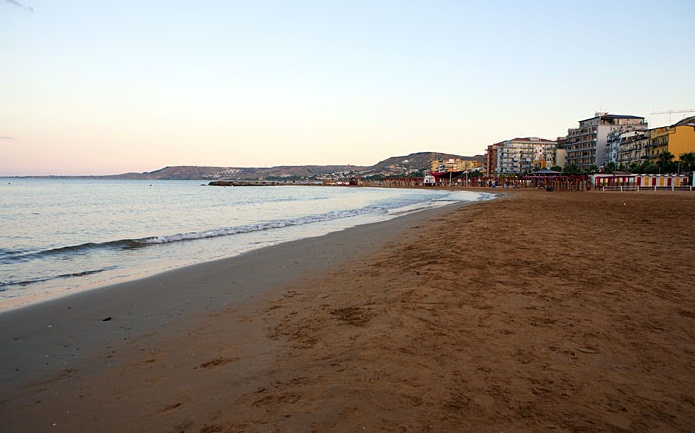 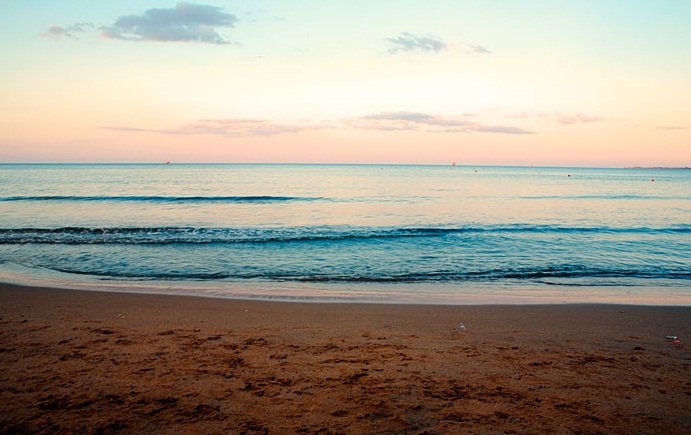 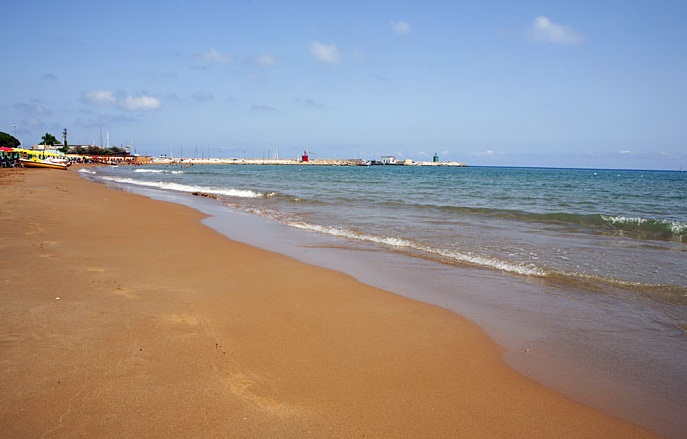