Destinations / The Best Places to Visit in Calabria, Italy / Cosenza

The city of Cosenza in Calabria is the capital of the province of Cosenza, an ancient Italic tribe called it the city of the gross. Cosenza is one of the oldest towns in Calabria. Because of the cultural past Cosenza was called the "Athens of Calabria". Here is an art academy (second in the Kingdom of Naples and one of the first based in Europe).

The origins of the city lost in the IV. BC, when grosses lived in these lands , Cosenza (then called the city Cosentia) was their capital and the main city of the Latin Calabria. The city grew rapidly and soon became the metropolis, the capital of the vast territory, which controls nearly all the cities of Magna Graecia in Calabria, which fell under the onslaught of gross. However, neither the power of the city of Cosenza, nor the courage Gross could not resist the Romans. Cosenza has become one of the items on the Roman road leading to Reggio . New Dawn Cosenza experienced when the emperor came to power in August: from a military town turned into a commercial center. As long as the king of the Visigoths 410 AD Alaric decided not to fight for control of Rome . Rome was sacked, and Alaric headed for the south coast, hoping to sail to Sicily and North Africa. But a storm destroyed his fleet, and Alaric himself ill with fever and tormented by the fear that the gods punish him, retired in Cosenza, where he died and was buried according to tradition is ready at the bottom of the riverbed, where the rivers Busento and Cavallo meet. (The burial place of Alaric has not been found). The next period came in the dawn of the VIII and the IX centuries during the power of Lombards and Byzantines. During the wars of the Saracens and the Lombards Cosenza was virtually destroyed. The city rebelled against the Normans several times, but without apparent success. When the power came from the Emperor Frederick II Hohenstaufen kind, Cosenza has become one of his favorite cities and he helped to develop the city economically and culturally. And in the power of Cosenza Angevins came to poverty, desolation and banditry flourished. It was only when Louis III of Anjou and his wife decided to permanently reside in the castle and made the center of the duchy of Calabria and Cosenza came to the rise. When the power of the Aragonese dynasty came, Cosenza has become the capital of the Latin part of Calabria, which included most of the modern province of Cosenza. The Academy of Art was born in Cosenza during this period. In the XVI century Cosenza has remained a thriving and a cultural city and was called the "Athens of Calabria." During the Risorgimento Cosenza expressed freedom and patriotic views. On March 15, 1844 uprising, were inspired by the brothers Bandiera : Attilio and Emilio. The brothers were active fighters for the liberation of Italy from the Austrian yoke, in 1841 they created a secret organization "Esper" (which later became part of the "Young Italy"). Prior to that, the brothers have already attempted an uprising, which failed. Calabrian revolt was put down, too, on the denunciation of the traitor, the brothers were captured and shot. In subsequent years, the struggle for independence continued. While in the 1860 Cosenza has not acceded to the United Italy . At the beginning of the XX century Cosenza began to develop and grow, new homes and neighborhoods had been built. During the war, Cosenza was bombed by the end of the war came the decline and the destruction. But the economic boom has helped to quickly recover from Cosenza, the number of residents began to grow, but the historic center has remained rather neglected - people preferred to settle in the new city. On the coat of arms Cosenza has against the azure sky tower seven golden hills that guard the independence of the city on a green field and the two merging rivers.

In the historical center of Cosenza survived many palaces and churches, narrow streets are woven into the maze and climb up the hill. Many houses and palaces destroyed by half create the impression of desolation. The cathedral was built in the XI century in the Romanesque style and was consecrated in 1222 in the presence of the Emperor Frederick II, but an earthquake in 1184 destroyed the facade. Later the building was repeatedly reconstructed and restored after the earthquake and the effects of time. Its present appearance Duomo acquired in 1831, and in 1981 was elevated to Sanctuary, which houses the ornate Madonna from Peeler, the patron saint of the city. Also in the cathedral is a wooden crucifix in the XV, the Funerary monument of France, Queen Isabella of Aragon, wife of Philip III, who died in Cosenza in 1271 the Queen returned to her husband from the failure of the Tunisian crusade. When passing through the river the horse stumbled the queen, Isabella and fell into the river. At this time she was seven months pregnant. The sarcophagus of Louis of Anjou was the Duke of Cosenza, the last of the Angevins, who lived here. Near the monastery is located the Blessed Duomo of the Virgin Mary (Chiesa e Convento di S. Maria delle Vergini). Here is an altar table in 1576 and the XIII century. A little further on is the church of St. Francis of Assisi (s. Francesco d'Assisi), which was founded in 1221. The church was rebuilt several times in the XVII century. It has acquired the features of the Baroque and in 1943, was severely damaged during the bombing. In the church of St. Francis of Assisi is stored in a wooden crucifix XV and XVIII century, a marble statue of the Madonna and Child with the XVI century, paintings of the artist Daniele Russo (1618) and others. Adjacent to the church of the former monastery complex you can see a beautiful courtyard. In one of the seven hills of the city rises the castle built by Frederick II, who was in love with Cosenza. According to the legend, in 1242 the castle imprisoned the son, Henry Frederick II Lame after he rebelled against his father. The Tuff castle was built in its plan in a rectangle with towers at the corners. In 1433 the castle housed the residence of Louis III of Anjou and his wife Margaret, daughter of the Count of Savoy Amadeus VIII. Later, there lived the King Alfonso of Aragon. In the XVI century staged in the castle prison, which in 1560 was in custody Calvinist Gian Luigi Pasquale, engaged in the missionary activity in Calabria. From 1630 began to decline, the earthquake destroyed the castle, the stones crumble and the towers collapsed. Now (2012) the castle is being reconstructed. The important church of Cosenza is also the church of St. Francis of Paola (Chiesa di S. Francesco di Paola). The church and the monastery were built in 1510, but in 1720 completely reworked the project Giovanni Cali. Within the preserved works of art of the XVI century include the works by Pietro Negroni "Madonna and the Child with joy" and "Saint Paul and Lucca." St. Francis of Paola, especially loved and respected in Calabria, since it is the only saint, which is home to the region. Born in the seaside town of Paola , St. Francis is the patron of sailors and Calabria, which helps them to cross the dangerous currents from the Gulf of Messina . The church stands not far from the merging of the two rivers, according to the legend, this was the tomb of King of the Visigoths of Alaric with countless treasures .But this is only a legend, nor the body of Alaric, nor his tomb has not yet been found. One of the two rivers in ancient times was called a "golden river", because it was a mine on the shores of gold and iron. According to an old tradition, the Calabrian women washed their hair in this river, if they wanted them to become of light golden color. The second river, on the contrary, made the hair darker. One of the most privileged of Cosenza churches after the Duomo is the Church of San Domenico built in 1449. It is decorated with Late Gothic rose window. In the church are the works of local artists and on the right side of the adjacent Dominican monastery. We can say that the church is on the border of the old and the new city.

Write your Review on Cosenza and become the best user of Bestourism.com 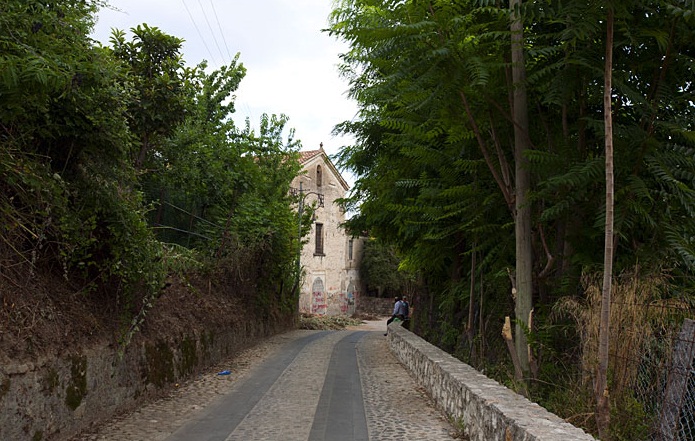 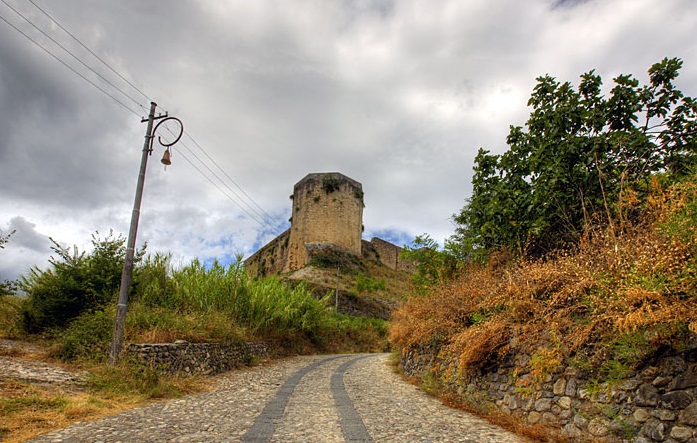 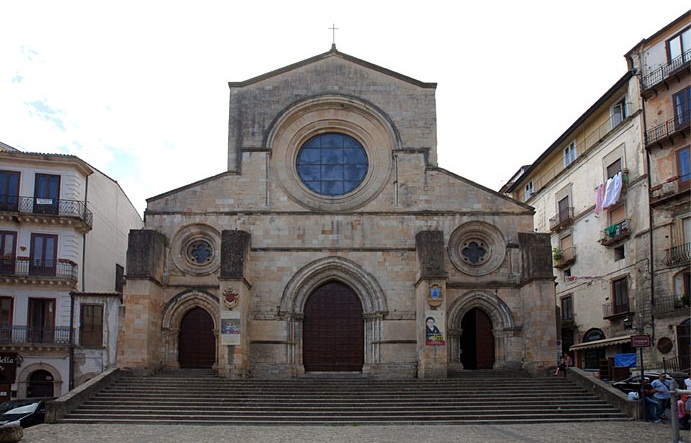 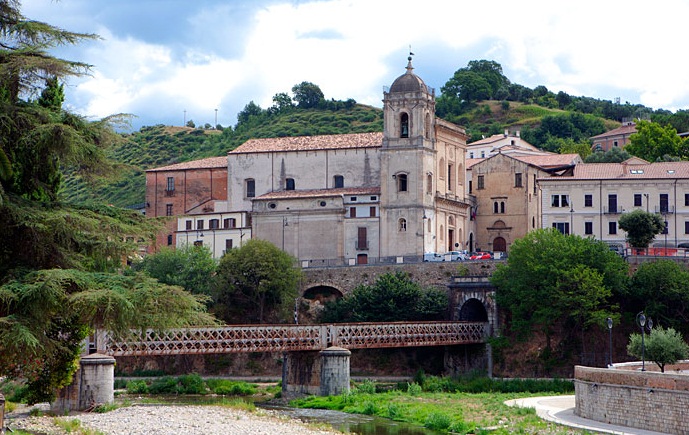 Cosenza - The Church of St. Francis of Paola 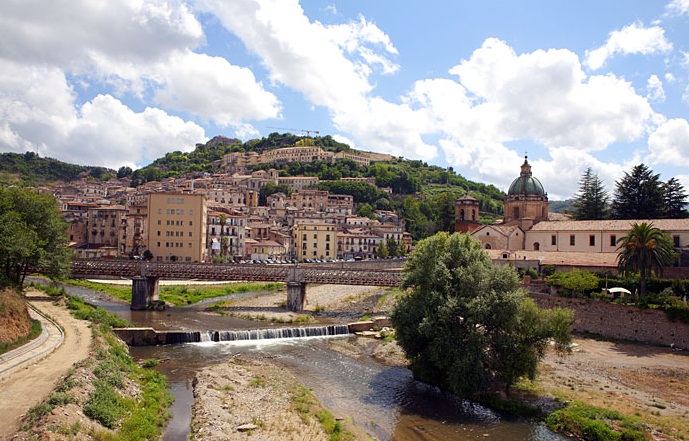 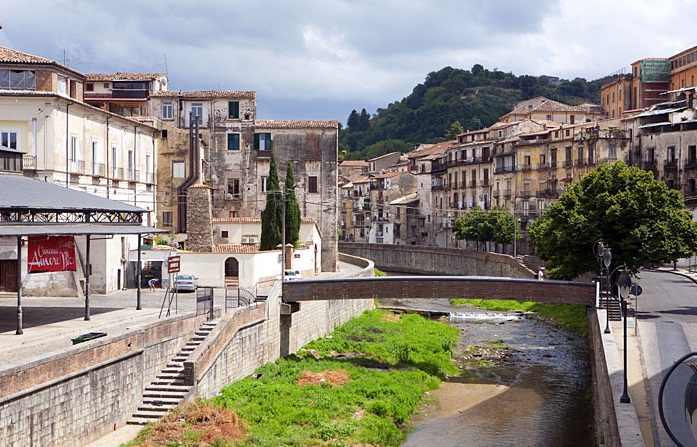