Destinations / The Best Places to Visit in Calabria, Italy / Catanzaro


The coasts of the Tyrrhenian and the Ionian seas are very different from each other. The western (Tyrrhenian) coast described the adventures of Odysseus in Homer, also picturesque is its eastern neighbor based on the Ionian Sea. The beaches in the east are careful and extensive only occasionally interrupted by gently sloping hills. The other side of Calabria, which looks towards Sicily and the coast line is much more diverse in the north region, near the cities of Praia a Mare and Scalea where there are wide beaches of fine pale sand. Further, in the direction of Belvedere Marittimo and Paola, the sandy area is a bit narrow. But the most beautiful natural solariums are located between the towns of Pizzo and Nicotera. Capo Vatican, from where Sicily is clearly seen in good weather is surrounded by natural rocky coves, small exotic framing strips of sand. Local cozy beaches are considered among the best in Italy, in Calabria is so happy to go to rest tourists from all over Europe.

Catanzaro is both the capital and a province and the whole of Calabria, located at the narrowest part of Italy. Scientists believe that once there were splashing waves of the sea, but gradually the water receded, leaving jagged ravines areas. Even the very name of Catanzaro is translated as "who grew up on the edge of the gorge."Today's civil engineers brilliantly used a complex geodesic subbase, inherited a city, connecting the individual areas of light viaducts, of which the suspended overpass Morandi is one of the longest single-span bridge in Europe. The capital of Calabria can be called a young city, its chronology began only at the end of the IX BC, which is not typical for Italy. The city has almost no ancient monuments, as in 1783 it was virtually destroyed by a strong earthquake. Even the main cathedral of Catanzaro was restored only in 1960, the site of its predecessor, which was destroyed during World War II. The capital Kalabrmi gives the impression of a modern city, among the recent buildings look a bit lonely historic building of churches and palaces, but it also preserved medieval residences which survived numerous earthquakes.

The history of Catanzaro is related to its strategic position and freedom-loving people manners. It was the capital of Calabria , even in difficult periods of history when foreign invaders divided the region into three parts. Catanzaro is known as a city of two seas, as well as a city of three “V” in association with three unique features of the city, namely St. San Vitaliano , the patron saint of the city; velvet (velluto) and wind (vento) constantly blowing from the Ionian Sea. “VVV” silk industry was the symbol of Catanzaro, known not only in Italy but all over the world as one of the leading producers of silk, velvet, brocade and damask. The very spectacular sight of the city, perhaps one of the highest in Europe single-span bridge, viaduct Ponte Sulla-Fyumarella connected the main part of the ancient district of Galliano. Due to their size and boldness of conception, it is one of the best bridges in Europe.

At 36 km west of Catanzaro is an international airport of Lamezia Terme, where daily flights from Rome and Milan arrive daily , as well as charter flights to other countries. A more convenient option is traveling by train to the station or the center of Catanzaro Lido.

Following in Catanzaro to the Adriatic coast, stick to the road E90. Following from the Tyrrhenian coast to move on the A3 motorway leading from Salerno in the region of Calabria, exit the motorway in the direction of Lamezia Terme, then about 30 km to adhere to the road, "the two seas” SS 280.

Catanzaro has its own underground with 11 stations scattered throughout the city. Another way to get to Catanzaro serves an extensive network of bus routes served by AMC (49 routes).

The kitchen Catanzaro is characterized by the presence of ubiquitous strong flavors and fragrances. Chili is used in almost all the traditional dishes which are also frequently used and other spices such as oregano, basil, bay leaf. Popular variety of pasta dishes: pasta with wild fennel and chickpeas; “pasta dei mietitori” with a sauce of onions, zucchini and potatoes, pasta with anchovies, homemade pasta, in particular “nduja” which is used when cooking ground beef, carrots, potatoes, pepper, olive oil, garlic, onion, salt, Parmesan or pecorino. Another local specialty is almond granite. Among the desserts are known “pitta'nchiusa” and “cuzzupe”. From drinks can provide a spicy cocktail “momò”.

Catanzaro Beach, or as it is called, Catanzaro Lido, is located just a short walk from the city center and is the principal place of amusement, as locals and tourists like. Catanzaro Lido stretches for five miles along the coast of the Ionian Sea and along the two-kilometer beach promenade focuses catering, bars, nightclubs and hotels. The area of Casciolino in Catanzaro Lido equippes marina.

Entertainment, tours and attractions in Catanzaro

Corso Mazzini starts just behind Piazza Matteotti. There are notable: the church of San Giovanni (Chiesa di San Giovanni) and the church of Sant 'Omobono (Chiesa di Sant'Omobono), dating back from the 11, 12 centuries. Also interesting: the Duomo - the main cathedral of the city, the church of Monte dei Morty (Chiesa del Monte dei Morti), the Kavour Square (Piazza Cavour), Roma Square (Piazza Roma), the church of San Rocco (Chiesa di San Rocco), the church of San Francesco (Chiesa di San Francesco). If you walk down the street Seth (Via de Seta, a silk street), you can reach the observation deck, which offers beautiful views of the bay Skuillache in the Ionian Sea, where according to some scholars, is the port , blessed the people mentioned in the "Odyssey" by Homer. Here, according to Homer, Odysseus was adopted by sailors from the fabulously high-speed ships and told them his story. The Duomo, built on the ruins of the Norman cathedral in 1121 was dedicated to Santa Maria Assunta and the Apostles Peter and Paul, was almost completely destroyed by bombing in 1943, but later restored. Nature lovers should look into the park "Biodiversita Mediterraneo," which is a vast botanical garden with more than 20 plants and thousands of lakes. The park is home to many birds and mammals in the Mediterranean. The Military History Museum is located in the park, the exhibition is represented by an extensive collection of weapons, military equipment and old maps from 1600 and ending to the Second World War. Museums In Catanzaro, there are other interesting museums: the Museum of Contemporary Art “MARCA”, the provincial museum of “Villa Margherita” a collection of coins, various relics and prehistoric exhibits, the museum of transportation (Museo delle carrozze) with a private collection of Baron De Paola, the Museum of the Risorgimento, the museum silk. The museum has a collection of Transportation wagons, which were used for the filming of numerous Italian and foreign films, including "Gone With the Wind." The museum of the Risorgimento contains various memorabilia, weapons of the era of Garibaldi and the war in Africa and Spain, conspiratorial maps, diaries and military records policy of the Italian Giuseppe Mazzini. The museum of silk collected equipment and documentation for the processing and marketing of silk.

Write your Review on Catanzaro and become the best user of Bestourism.com 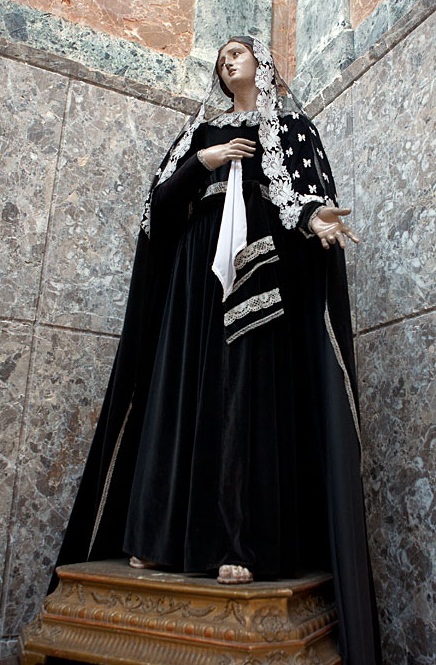 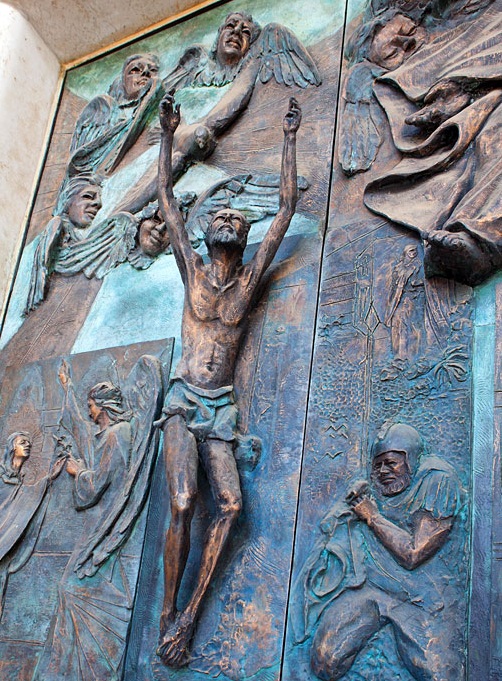 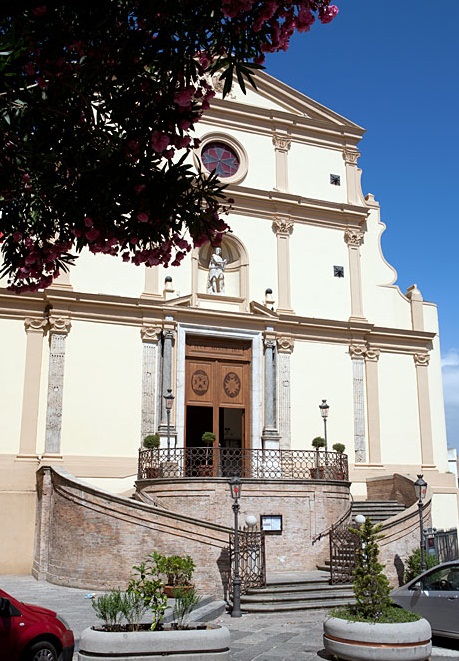 Catanzaro - At the entrance of the Cathedral 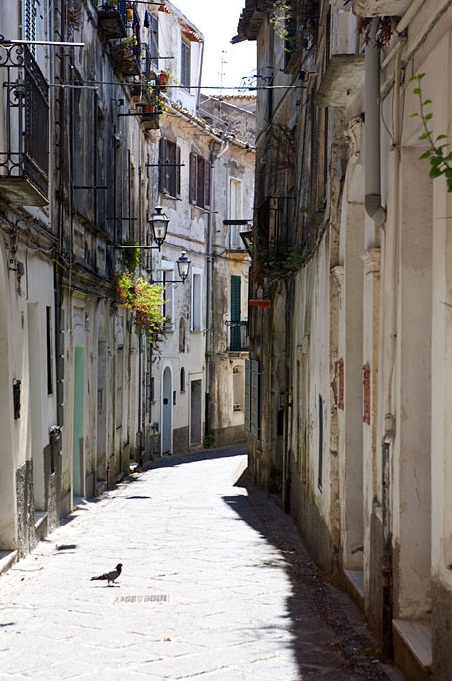 Catanzaro - Street of the city 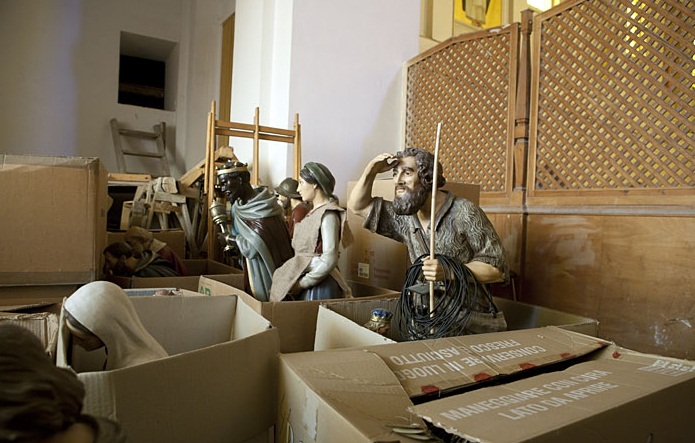 Catanzaro - Interior of the Cathedral 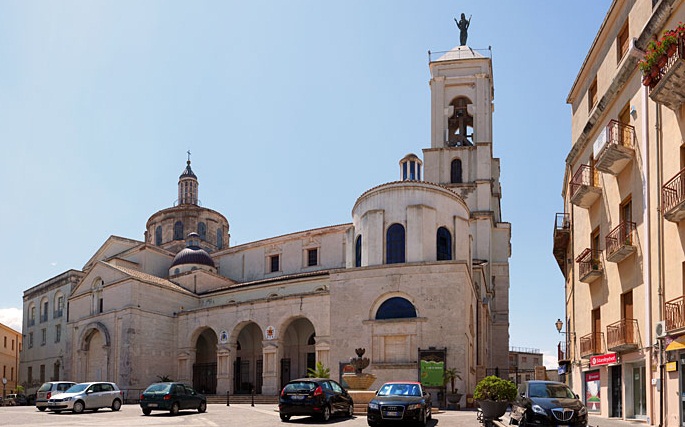 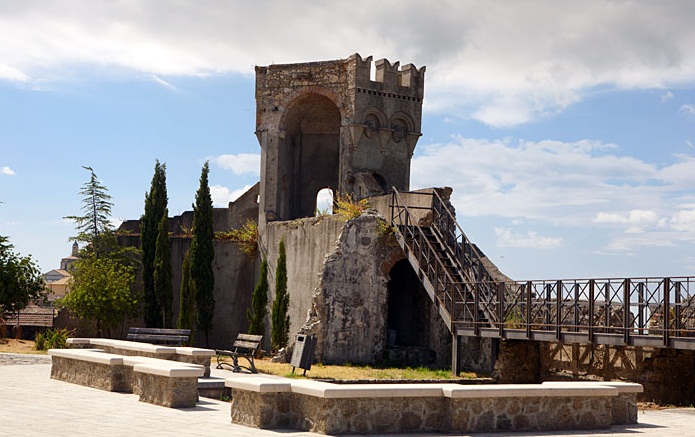 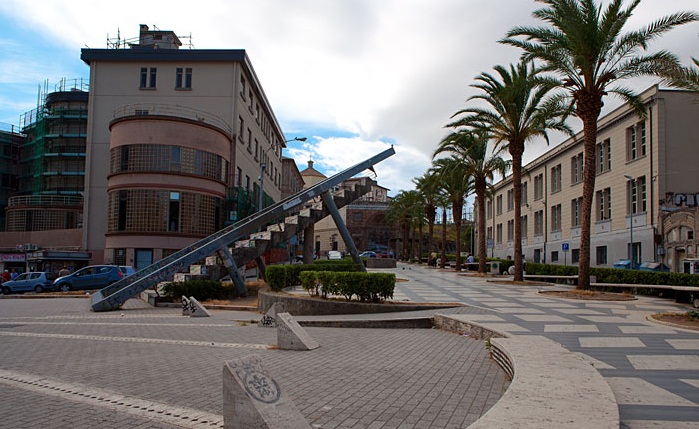 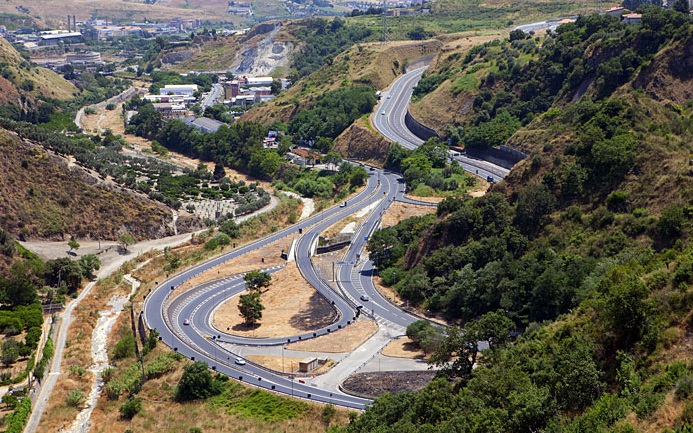 Catanzaro - The road leading to the city 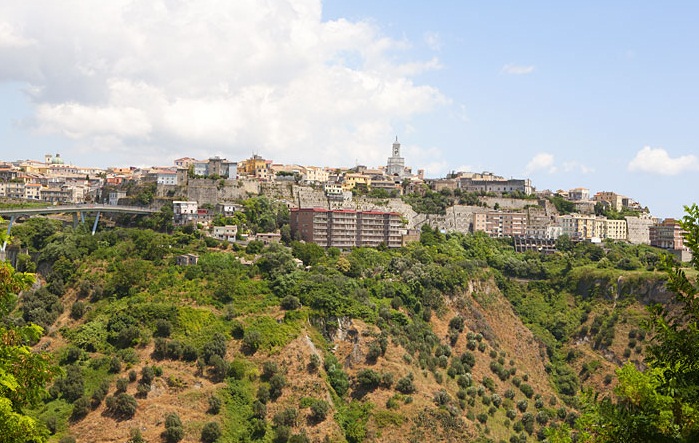 Catanzaro - The city of two seas 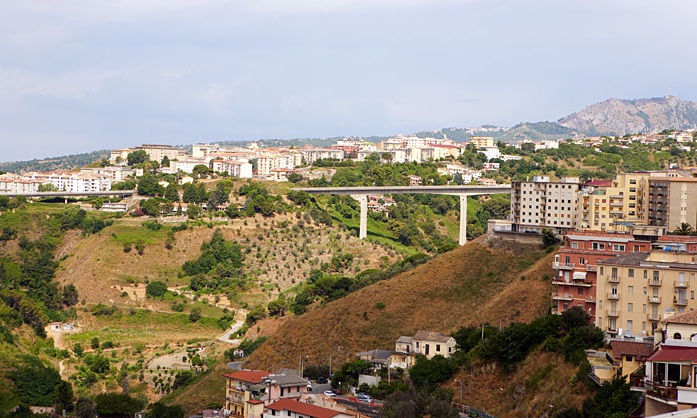 Catanzaro - Special atmosphere of the city 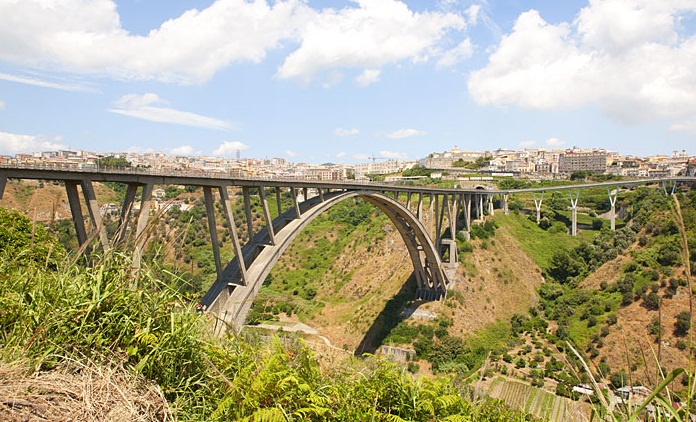 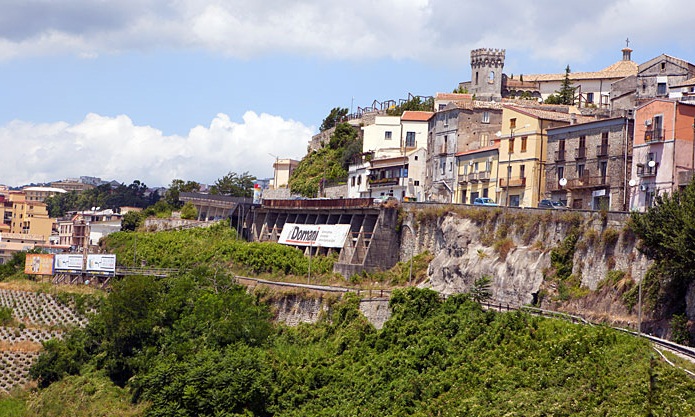 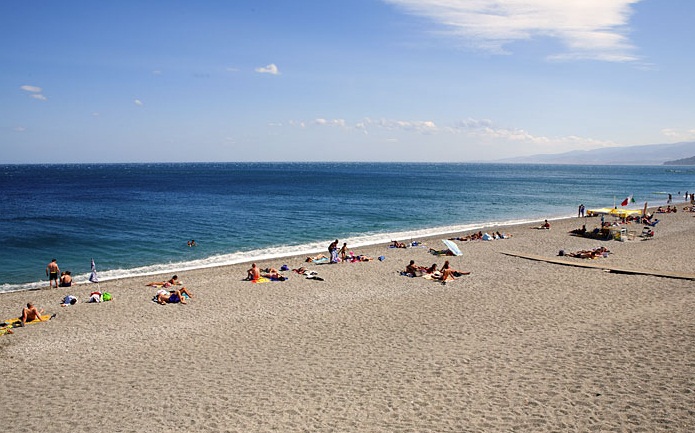 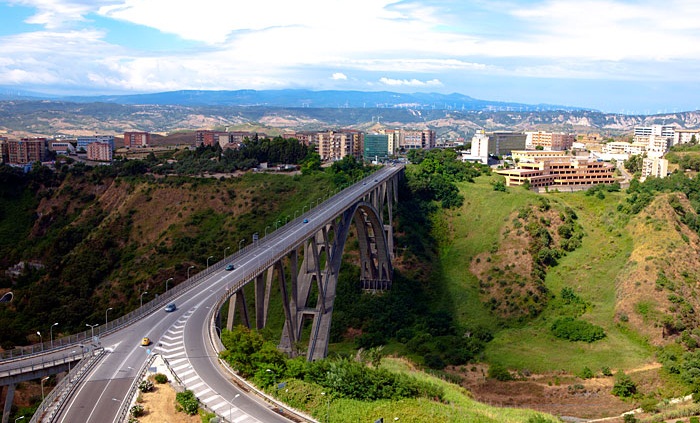 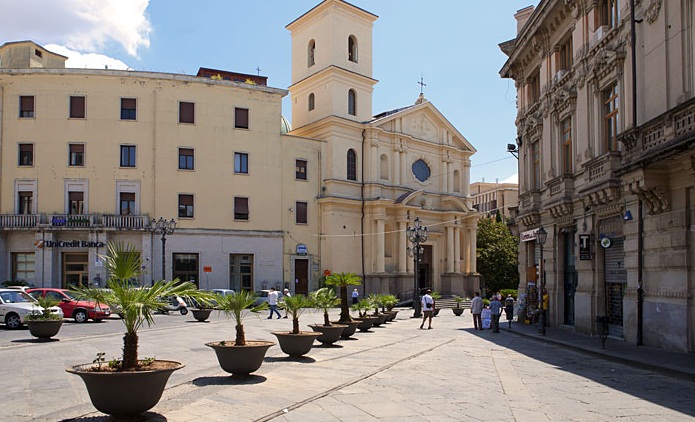