Destinations / The Best Places to Visit in Riga / The Great Guild


Historically, the Grand Guild took the merchants. Riga was the largest shopping center and a member of the Hanseatic League. Also the Great Guild took some high-ranking officials, priests, men of letters, but only from the artisans of goldsmiths. The rest of the artisans had to apply to the Little Guild. The buildings guilds of Riga were multifunctional public facilities: once people prayed here, stored grain and gave shelter and later important meetings and celebrations, banquets and meetings with partners and customers to do business were held here. Today the building belongs to the Guild of Great Latvian Philharmonic and serves as the home of Latvian National Symphony Orchestra . For many decades this one of the most popular inhabitants of Riga concert halls. It is friendly, kind, with excellent acoustics. Despite numerous restructuring and a terrible fire in 1963 the building of the Great Guild Hall Munster kept the 13th century (with the arms of the Hanseatic cities, including Russian Polotsk!) a beautiful Peace and the general atmosphere of a medieval flair. The building was formed in Riga in 1354, when merchants were separated from the Holy Cross and the Holy Trinity. Most of the guild members were German merchants and jewelers. The remains of the first building of the Great Guild Street Amat 6 can be seen in the basement of this building. In 1330 it was built a two-storey building with a meeting room, the so-called Munster Chamber. The current building was constructed in a big Guild 1854 - 1857's by the architect K. Bane. The English - Gothic construction was supervised by architect H. Shale. The new building has been preserved most of the previous building with rooms (bride's peace). The building is characterized by a large guild, an eclectic form of English Gothic and a great interior.

Write your Review on The Great Guild and become the best user of Bestourism.com

Maps of The Great Guild 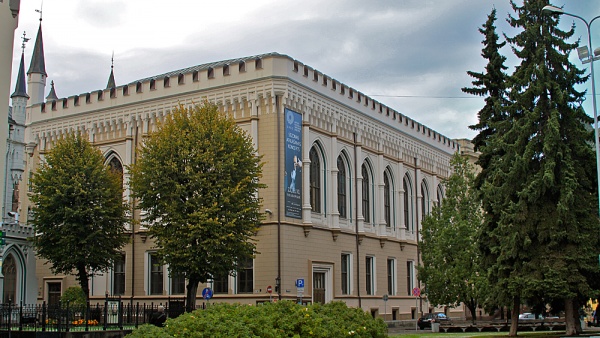 The Great Guild - The home of the National Latvian Symphony Orchestra