World Tourism / The Best Places to Visit in Algeria / Djemila


The Djemila city lies at an altitude of 900 m above the sea level. Its temples, basilicas, triumphal arches and other structures are striking examples of the Roman town planning adapted to the location in the mountains. Djemila was during the Roman town known as Cuicul. Today Djemila is a small village in the mountains of the north coast of Algeria, but the ruins of the former city are observed today and it is a worth visiting place for those passionate about history and archeology and more. The archaeological site is protected by UNESCO, which makes much of the former Roman city fairly well preserved. You can see today the basilica, theater, forum, Roman baths, arches and many of the city walls. Djemila territory is located at 50 km north-east of Setif.

Known under its old name Cuicul, Djemila is an establishment of an ancient Roman colony, founded during the reign of Nerva (96 - 98 AD). The Roman city occupied an exceptional defensive position. Cuicul represents some of the colors of the Roman architecture in North Africa. Remarkably adapted to mountainous places restrictions on a rocky spur, which extends to a height of 900 meters, between Wadi and Wadi Guergour Betame, two mountains, the city has its own Senate and Forum. Around the beginning of the 3rd century it expanded beyond its ramparts with the creation of Severus Septimiusa Temple, the Arch of Caracalla, a market and a civil basilica. The location was also noted by Christianity in the form of several religious buildings: the cathedral, the church and its baptistery considered among the greatest of the period. The territory includes an impressive collection of Djemila mosaic pavings, illustrating the mythological stories and scenes of everyday life. Djemila is an evidence to a civilization that has disappeared. This is one of the most beautiful Roman ruins in the world. Archaeological remains, well-integrated the Roman urban planning and the surrounding environment includes elements that represent the values assigned to this place. Djemila is an outstanding example of the type of architectural ensemble which illustrates a significant stage in the history of Roman North Africa. In this case, the classical formula of the Roman urban planning has been adapted to geophysical constraints place. The place includes a very diverse typological and architectural repertoire with a protective system, and the Arch of Triumph, a public toilet and the theater building, the means to craft and trade, including market brothers Cosinus, which is a remarkable evidence of the economic prosperity of the city. Cemil evidence to the Roman civilization is an outstanding example, with its forum, temples, basilicas, triumphal arches and houses, an architectural ensemble of the representative of Roman culture. This is also an interesting example of Roman town planning adapted to a mountain location. The Roman colony Cuicul was probably based on an existing territory Dje'mila, during the brief rule of Nerva (AD 96-98).Early city, which name has a Berber origin, is a great defensive position on a rocky spur, which extends to a height of 900 meters, between two mountain streams, Wadi Wadi and Guergour Betame. The classical formula of the Roman urban planning has been adapted to the physical limits places: at both ends of the cardo Maximus, the basis of the two gates. In the center of a forum, a nested square surrounded by buildings are important to the functioning of the civil life: the Capitolium to the north and the Civil Basilica (Basilica Julia) to the west. The aristocratic housing set with rich mosaics, from where they draw their modern names (the House of Amphitrite, the House of Europe, etc.) multiplied during the second century in the central quarters, where the Temple of Venus and the Genetriks macellum (covered market) is also located. However, this tight defensive situation, surrounded by walls, prevented the development of the city. In the mid-second century, the city has expanded so to the south, where a new quarter, both rich in public buildings and private housing, has been installed. Here were built the Caracalla Arch, the Severus church , a new forum, the theater (already completed at Antoninuse Pius), and, further ahead, baths, built in the reign of Commodus. Among the buildings of the classical period the Basilica Vestiaria (Market tissue) and the fountain, which is a small replica of the meta Sudens in Rome, are remarkable. Christianity was introduced into the southern quarter shortly. The remains of the buildings located the Episcopal there, two basilicas, a baptistery, the chapel and some buildings, the residence of the bishop and priest. The Vandals were Dje'mila for only a short time, the city was retaken by the Byzantines in 553. The excavation did not begin on the territory of the left, which has been one of the most beautiful Roman ruins in the world until 1909.

Write your Review on Djemila and become the best user of Bestourism.com 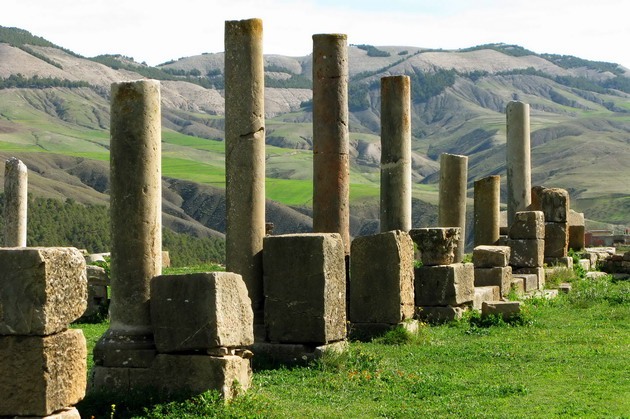 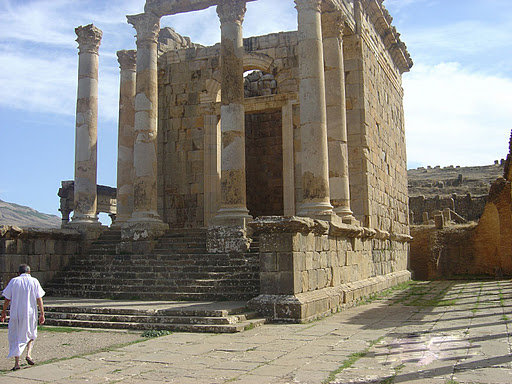 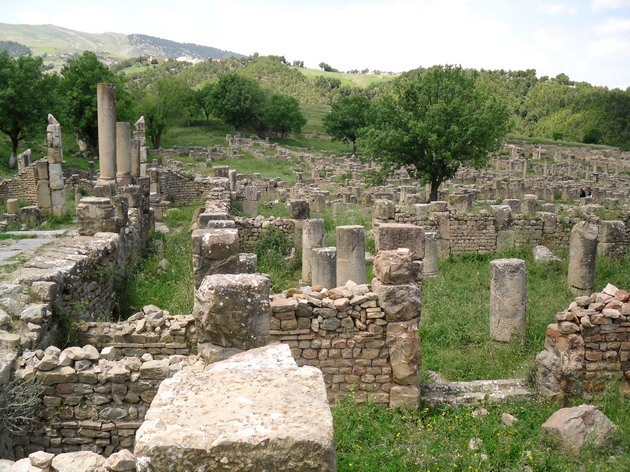