The Mausoleum of Imam al-Bukhari


In the village Khortang, twelve kilometers away from Samarkand, is one of the shrines of the Muslim world – the Memorial Complex of Imam al-Bukhari . The prominent Sunni scholar theologian Imam Muhammad ibn Ismail Abu Abdallah al-Bukhari went down in history as the author of the second largest after the Quran Islamic book - a collection of the most authentic hadith, " Al-Sahih al Zhomi . " He was born in Bukhara in 810, orphaned early, but since childhood has been successfully comprehend in theology, and most of all it has attracted the study of hadith. The ten-year lad was allowed to participate in debates and hit theologians with his expressive reading of hadith, and most important, with a deep interpretation of the deeds and sayings of the Prophet Muhammad. When the boy was fifteen years old, he and his mother and brother made a pilgrimage to Mecca and Medina. Driven by a thirst for knowledge, the young al-Bukhari visited Damascus, Cairo, Basra, Baghdad, Hijaz and Kufa. He had collected and recorded the hadith in all countries and cities. Of the nearly six hundred thousand traditions of al-Bukhari chose as the "perfect" Hadith 7275. In his book "Al-Sahih al Zhomi" systematized the science of their subjects. The book includes historical, biographical, legal, ethical, medical and other sections. Many of the hadiths included in this book were subsequently made to the "Sharia" and received the status of laws for the faithful. Peru Imam al-Bukhari belongs to more than twenty theological works. At the end of life, al-Bukhari returned to his home in Bukhara. Emir Khalid ibn Ahmad wished that famous philosopher lived in his palace, and he taught his sons. According to the tradition, Imam said: "I do not humiliate science, bringing it to the palaces. Who needs knowledge, let them carry themselves. Allah will forgive me that I have never concealed their knowledge and give them to those who attended. " Emir commanded to expel him from Bukhara. Aged Al-Bukhari went to Samarkand, but on the way he fell ill and died in the village Hartang in 870 at the age of sixty years.

The burial place of Imam al-Bukhari was considered sacred. In the XVI century on his grave was erected a small shrine and mosque, surrounded by plane planted trees. Over the time, these buildings were dilapidated, and in 1998 the memorial complex was erected in this place, which includes a mausoleum, a mosque, where half of thousands believers pray at the same time and there are also are other facilities along the perimeter of the courtyard. The Mausoleum of Imam al-Bukhari , located on the axis of the architectural complex, has a seventeen meters dome, its interior is decorated with ganch marble and granite. In the center of the mausoleum is a tombstone - sagana of light blue onyx. The carved wooden door leads to a lower room of the tomb, to Dakhma - a place of worship. Over the tomb is situated the Education Center Dorus Hadith, designed to study the hadiths. The walls of the mosque complex of Imam al-Bukhari is decorated with glazed ornaments. In mikhrab niche hangs a Muslim shrine Kisva - matter Kaaba, a gift from the King of Saudi Arabia, Uzbekistan. Visit the tomb of al-Bukhari.

Write your Review on The Mausoleum of Imam al-Bukhari and become the best user of Bestourism.com

Maps of The Mausoleum of Imam al-Bukhari 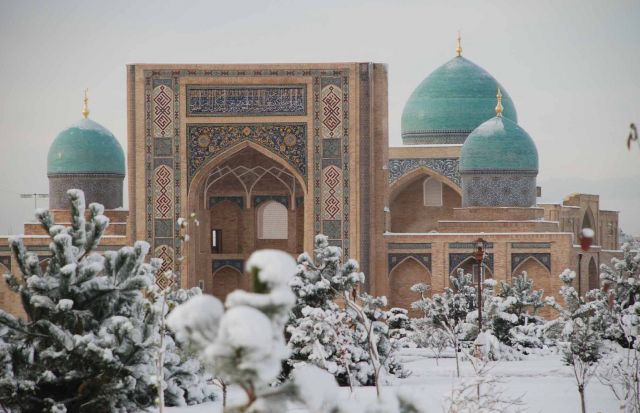 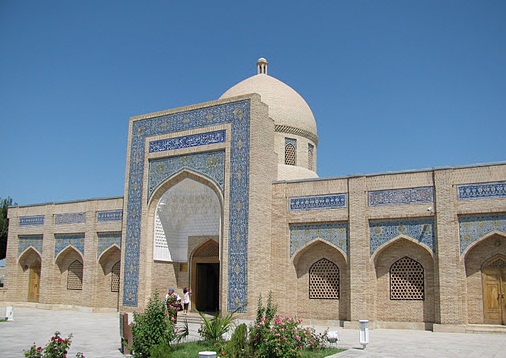