Destinations / The Best Parliament Houses in the World / The Hungarian Parliament, Budapest


The Hungarian Parliament is the majestic symbol of independence and unity of the Hungarian nation proudly overlooking the Danube. It is one of the world's largest government residences and at the same time a symbol of Hungarian national unity, one of the most representative and popular parliamentary buildings in the world which annually attracts millions of tourists.

The Hungarian Parliament was built in neo-Gothic style by the plans of Imre Shtayndl. The construction began in 1885 , and it was completed in 1904. Thousands of workers participated in the construction and 40 million bricks, half a million plates of soft limestone and 40 kg of gold had been used . The monumental building is 268 meters long and 123 m wide, the interior includes 10 yard, 13 passenger and freight elevators , 27 gates, 29 staircases and 691 rooms (in addition, more than 200 offices). With its height of 96 meters, this is one of the tallest buildings in Budapest. The facade is decorated with 242 sculptures of Hungarian and Transylvanian rulers and the military known as Arpad , King Istvan and Janos Hunyadi. Above the windows can be seen depicted the arms of the kings and dukes. The main facade is the Danube, but the main entrance is on the east side and a staircase decorated with the statues of two lions . The building of the Hungarian Parliament is distinguished by its grandeur and beauty. There are 365 towers for each day of the year, and the height of 96 m is related to age a thousand years in 1896 by the arrival of the Magyars in Pannonia. Because it is built of stones of sandy shore of the Danube River, the water from the river annually erodes the walls because many details need to be made almost constant repairs of Parliament. During bombing in World War II , the building was almost completely destroyed after the war but it was rebuilt and today Hungarians are proud of the magnificent building, one of the most beautiful parliament buildings in Europe. In 1867, after centuries of domination of the Habsburgs, Hungary was declared an independent state, although it continued to govern all the same Emperor Francis Joseph, King of Austria, who was announced and now the King of Hungary. But now the new Hungarian state has its own parliament. In 1896, the construction has progressed to such an extent that the building has been possible to hold a celebration to mark the millennium conquest of Hungary Magyars tribes. In 1902 the building was completed.

The Parliament, located right on the Danube, an unusually large-scale structure is also one of the most interesting samples of neo-Gothic architectural style. The whole image of it is as high expectations associated with the formation of a new, independent kingdom, and a cosmopolitan openness to its capital ties with all countries of the world. In addition, the Parliament should certainly testify to the wealth of Hungary, experiencing in that time a period of economic growth. The grand outlines of the Parliament of the is set on neo-Gothic towers and a powerful dome towering between the two main towers. The height of the dome is exactly 96 meters, which represents the date of the conquest of Hungary, the Magyars in 896. The building is rectangular in shape with sides of 268 and 118 meters. It contains ten courtyards, 29 staircases and 691 premises. The powerful dome rises in the spotlight in the night sky. The architect Imre Steindl was specialized in the restoration of historic buildings. He was a disciple of the Austrian architect Friedrich Schmitt, one of the pioneers of neo-Gothic style. The external facades are decorated with statues of Hungarian kings and the princes of Transylvania, as well as the famous Hungarian soldiers and generals. In front stands the equestrian statue - a monument to Rakosi Ferenc II, who led in the early XVIII century, a war of liberation against the Hungarian people of the Hapsburg rule. On the north side is a sculptured group, which focuses - Lajos Kossuth, the chief organizer of the struggle for the independence of the Hungarians during the revolution of 1848, several months he remained the supreme ruler of the country. In the center of the building, directly under the dome, is located the main hall. On both sides of it there are two rooms, in which the two chambers of the Hungarian Parliament are sitting: Upper House in the North Hall (in 1945 this house was abolished) and Lower (now the National Assembly) in the southern hemisphere. The main entrance is at the center of the eastern façade and to it is a staircase, painted by two bronze lions. Inside, visitors are greeted by a magnificent grand staircase, a painted ceiling and the ceiling of the architect Imre Steindl bust in a niche. The main hall, surrounded by an annular foyer corridor is decorated with sculpted portraits of prominent figures of Hungarian history. Among them - the Prince Árpád, the leader of the Magyar horsemen conquered Hungary at the end of the IX century, and then conquered and Transylvania, István 1 (in the Western tradition, it is better known as St. Stephen), founder of the Hungarian kingdom, turning the Hungarians to Christianity, Janos Hunyadi famous general, in 1456 routed the Ottoman armies near Belgrade, and others.

Write your Review on The Hungarian Parliament, Budapest and become the best user of Bestourism.com

Maps of The Hungarian Parliament, Budapest 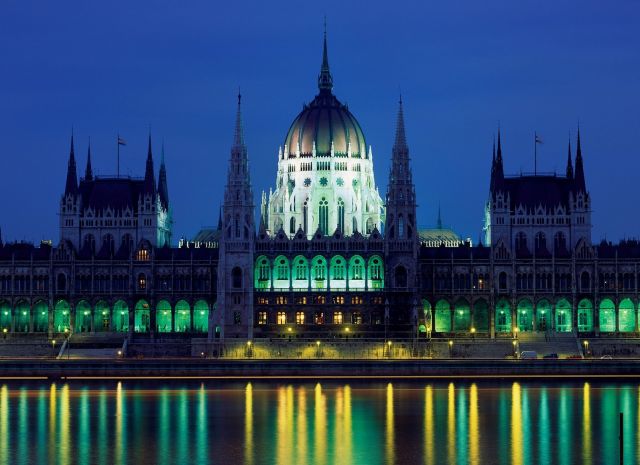