Destinations / The Best Parliament Houses in the World / The Houses of Parliament, London

The Houses of Parliament, London


The U.K. Parliament in London is the real attraction of the British capital and its business card. This is the place where the British Government works and the ruling party discusses current issues with the opposition. But the ordinary tourists have the opportunity to see this beautiful building, designed in a Gothic Revival style, from the inside. During the parliamentary recess ( from July till September) tours are held to show visitors several rooms. The British Parliament is one of the most famous buildings in the world .The House of Commons is the house where are the most important political debates. This is a small hall with benches upholstered in leather, designed for 437 seats. It is noteworthy that the members of the Parliament about half as much, are forced to stand during the debate. The " No-yEs Lobby ", here the legislation is voted on. The Royal Gallery of the Parliament, The Royal wardrobe , are designed for the monarch. The Hall of the House of Lords, the Westminster Hall , now are used only in the case of ceremonies. But the court session was held here before, including Charles I and the organizers of the Gunpowder plot. The Tour of the Parliament can be recommended for children over 12 years. To visit the Parliament cannot only on a tour, everyone can look at the debates of the Parliament from the guest gallery. It's enough to stand in line, and assist at the debates for free.

The Parliament building is opened to the public : to see the debate from the guest gallery can be possible on Monday and on Wednesday from 14 to 30, on Thursday and on Friday from 11.30 to 9.30. On Saturdays and during summer recess ( from July till September) daily tours are conducted with a guide.

The current parliament of the U.K. is located in the famous Palace of Westminster . For the first time the palace was built for King Edward, who succeeded to the throne in 1042. He was the principal residence of the kings of England. After forty years the most beautiful room in Europe - Westminster Hall, was built for William Rufus which in 1099 organized the first feast. During the reign of Henry 3rd (13th century) there was created the first parliament (1265) replaced by the Big Board – the meeting of noble people, representatives of the church and royal advisers. Later it gave rise to the House of Lords. Only 30 years later, it became more democratic and parliamentary representatives were not appointed, but chosen. In addition to the clergy, the nobility and the upper classes of persons from the kingdom, and the deputies were from the wealthy and small chivalry. Subsequently, these members of Parliament formed the House of Commons. In 1547 the royal residence was moved to the Whitehall Palace, and remained in the possession of the Parliament. In 1550, the members of the both chambers met separately with the representatives of the parliament. The meetings were held in the chapel of St. Stephan. The Palace of Westminster was badly damaged by fire in 1834, but Westminster Hall (main hall) and the crypt remained. King William IV asked the Parliament to use the Buckingham Palace, but its members have decided that they would restore Westminster. Its restoration was entrusted to Charles Barry, who recreated the palace in the Gothic Revival style. The work began in 1840 and lasted for 30 years. The ornamental paintings had been completed in August. The construction of the House of Lords was completed in 1847 but it was officially opened in 1852. By 1858 the basic ensemble of the new palace had been already completed. The palace suffered damage not only to subsequently fire. During the second World War, the House of Commons suffered from bombing. It was created for the first time in 1097 by William Rufus. In 1398 it had been restored. Within the precincts of the House of Commons there were all kinds of events: the celebration of the coronation trials took place there, Charles I had been sentenced to death there too, Thomas Moore, Earl of Essex, and other aristocrats. The Hall of the House of Commons was designed by Charles Barry in the style of the chapel of St. School ( Big Ben clock ). In 1941 it was destroyed, but by 1950 it had been restored by Giles Gilbert Scott's design. Most of the timbers for the reconstruction of the country were given the members of the Coalition. The Central Hall, Westminster Hall is the oldest part of the Houses of Parliament. Now it is used for important state ceremonies. From the main lobby in the corridors the hall of the House of Commons and the House of Lords can be achieved. They form the Parliament. The House of Lords considered the top, it consists of the leaders of the aristocracy and the Church of England. But the major political debates take place in the lower House of Commons, which consists of elected members by universal suffrage.

Write your Review on The Houses of Parliament, London and become the best user of Bestourism.com

Maps of The Houses of Parliament, London

The Houses of Parliament, London - Panoramic view from the Waterloo Bridge 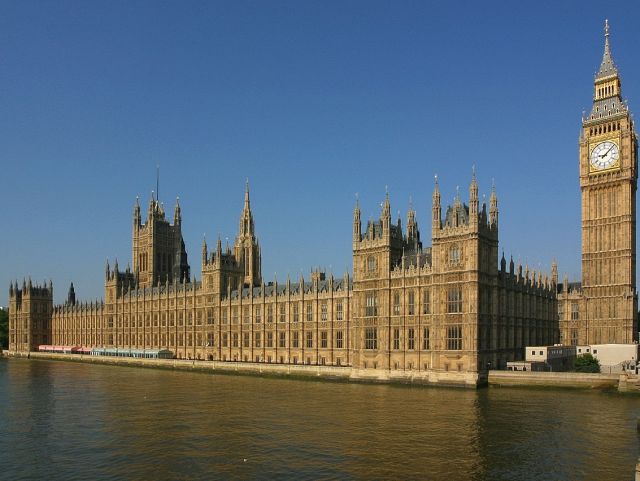