Destinations / The Best Parliament Houses in the World / The Palace of the Parliament, Bucharest

The Palace of the Parliament, Bucharest


The Palace of the Parliament which is in the Romanian capital Bucharest, is the world's largest civilian administrative building, as well as the largest parliament building and covers an area of 350 thousand square meters. The Palace of Parliament in Bucharest is one of the largest castle complexes in the world, it even concedes perhaps the Pentagon in Washington. The building size is 10% more than the Great Pyramid at Giza. The castle is located on a picturesque hill. Initially, the construction was called the "House of People", but in the post-communist era it was renamed. During the revolution of 1989 the opposition called the construction the "House of Ceausescu", denouncing the country's leader in the misappropriation of public funds. And when hard times passed, the government decided to call the office building the Palace of Parliament. According to the Guinness Book of Records, the Palace of Parliament is the second largest administrative building and at the same time the worst building in the world. Currently, in the Palace of Parliament several departmental organizations operate: the Romanian Parliament, the Congress Center and the Museum of Modern Art. Pompous halls and galleries are lavishly decorated with monumental sculptures, golden plasters, laced ceilings, tapestries and heavy carpets which simply overwhelm the imagination of visitors.

The most popular and grandiose are:

• The Hall of Human Rights with a total area of 625 square meters. The room is fully lined with oak tinted in various shades.

• Ionescu’s Hall, which regularly hosts various international exhibitions, fairs and concerts. The room is decorated with a magnificent collection of tapestries. Here there are such works as the "Autumn" from Ovid's Moga, the "Union" by Mary Nemes, the "Basket of roses" by Angela Braden, "The Garden of Peace" David, Marina, etc.

• Bratianu’s Hall area is of 42 square meters. Initially, the room was called the Provincial Hall. • The Union Hall, opened on December 22, 1994 to mark the fifth anniversary of the Romanian Revolution in 1989.

The Construction of the castle

Living in Romania is called a richness in the most ridiculous castle building of the country due to the fact that at the time the construction of the palace did not only display the current situation in the state, but it was out of the ordinary occurrence. The Marble Castle was built by order of the Secretary General of the Central Committee of the Romanian Communist Party (RCP), Nicolae Ceausescu to the government meeting. Not taking the consideration the background of the deep poverty in the country, the house looks like a peoples’ sarcastic monument of a wild waste of the governing authorities. The total cost of the construction has been estimated of one billion U.S. dollars by the experts. When in the hall of the palace hundreds of magnificent chandeliers were lighted, a large proportion of the population could afford a lamp at 40 watts. The total area of the palace complex is about 350 thousand square meters. The palace has twelve floors, 1,100 rooms, as well as eight underground rooms of which only four are in use, others are still under construction. In the construction process about 700 best architects were involved. The volume of the building materials used for the construction of the palace used imagination too. More than 3.5 tons of high-quality crystal had been spent in the castle: there are 1409 lights and mirrors, as well as 480 chandeliers. About a million cubic meters of expensive marble have been used for the external and internal walls. At doorways, windows and capitals took 700 000 tones of bronze and stainless steel. For the wall design of the panels, 900 000 cubic meters of valuable tree species have been spent, among which were nuts, elms, oaks, maples and cherries. On the soft floor the covering has left about 200 thousand square meters of woolen carpets. Weaving machines even had to be made inside the building to weave the largest carpet. In addition, huge amounts of money had been spent on fine tailoring and luxurious brocade velvet curtains adorned with gold and silver embroidery and beading. The construction lasted about 5 years, from June 25, 1984 to 1989. Nicolae Ceausescu was executed the same year. The dimensions of the newly built giant reached 270 meters in width and 240 meters in length and a height of 86 meters, and a deep underground structure sank in 92 meters. To build a huge palace complex was needed to destroy a fifth of the historic center of Bucharest. Without hesitation, the authorities ordered to demolish nineteen Orthodox Christian monasteries, six Jewish temples, and three Protestant churches. The structure of the castle was carried out in an eclectic post-modern architectural style and combines elements and motifs from various sources. Another well-known American journalist, a correspondent for "Newsweek" Edward Bear after a visit to Romania in troubled times, wrote that "the combination of cultural and aesthetic literacy, intransigent Marxist-Leninist orthodoxy and innate tendency to gigantism have been ... destructive to the building's architecture. "

The construction of a huge castle with a great name the "House of the People" began on June 25, 1984 and lasted for about 5 years. It was initiated by the former head of Romania's Nicolae Ceausescu. However, at the time of introduction into service of the palace as a result of popular unrest the country's leader was executed. After the Romanian Revolution of 1989 the site of the Palace of the Parliament functioned as the state parliament. On December 22, 1994 in honor of the fifth anniversary of the Romanian Revolution of 1989 a solemn opening of the new Hall of the Union took place. In 2004, the Palace of the Parliament settled the Senate, which previously was in the old building of the Romanian Communist Party Central Committee. Also in 2004, the panoramic glass elevator was launched into operation, which brings tourists to the National Museum of Contemporary Art (MNAC). At the same time began its work as a chic restaurant, created just for politicians. The plan administration currently allocated the construction of underground tunnels leading to the palace and a large parking at the former stadium.

The cost of the excursions (when buying a ticket on the spot):

Write your Review on The Palace of the Parliament, Bucharest and become the best user of Bestourism.com

Maps of The Palace of the Parliament, Bucharest 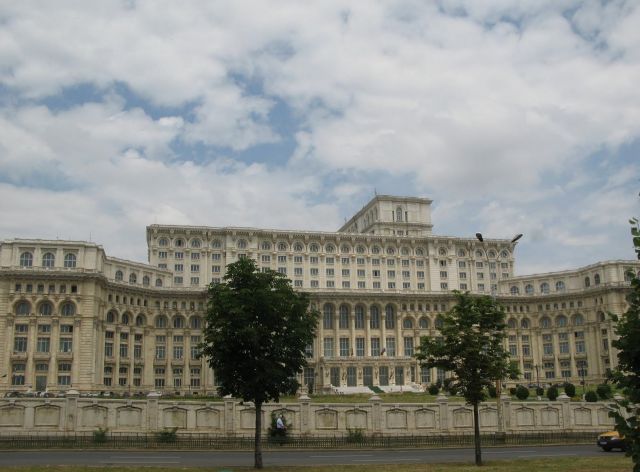 The Palace of the Parliament, Bucharest - Striking Building 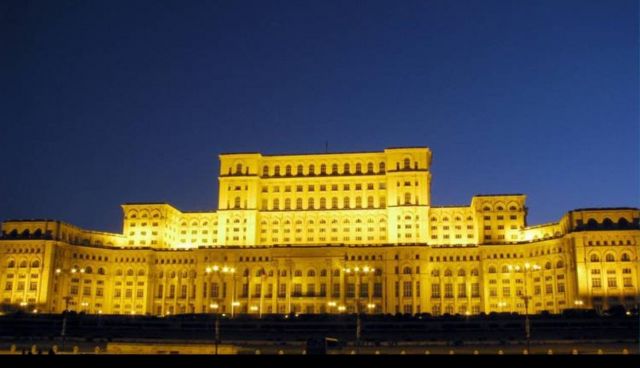 The Palace of the Parliament, Bucharest - Amazingly Beautiful Complex Building