The Leaning Tower of Pisa


In the field of miracles, as I recall, it was possible to grow a tree of gold. But this is a tale of life as the Square of miracles is the amazing Leaning Tower, the bell tower and still it cannot fall, fortunately. The bell tower of the cathedral of Our Lady of the Assumption, known worldwide as the Leaning Tower, is located on an area of Wonders 20 meters east of the cathedral . The area of miracles and wonders is a place where there are several sights of Pisa. Yet, the famous Leaning Tower is not the only decoration of this ancient Italian town.

Despite its inclination, from an architectural point of view, the Tower of Pisa is quite a whole and complete structure. It demonstrates high artistic quality and it perfectly complements the architectural ensemble of the square of Miracles. The location of the tower is unusual-usually placed near the bell tower of the facade or along one side of the church. This is because the project during the construction of the tower took into account the location of other buildings planned on the square of the cathedral. The tower's height allows it to be a kind of visual center: its fine, staring up forms can be seen from anywhere in the area and far beyond its borders, making the tower a bridge between the secular urban space and the architecture of the nearby religious buildings. The building built the bell tower for 12 - 14 centuries, and the present appearance was as a result of multiple restorations performed centuries later. The work on the construction of the tower began on August 9, 1173. In accordance with the practice of the building in coastal regions, after laying the foundation before you continue building, waited a whole year.

Regarding the author's original draft, there is a disagreement. Some believe that it was a master Diotisalvi, who at the same time built a baptistery . This version is also confirmed by the analogy between the design and the decor of the two monuments. There is a version that the Leaning Tower of Pisa was built by Gerardi, a famous Italian historian Giorgio Vasari, but the tower is believed to be mentioned first in the draft of Bonanno Pisano. The first phase of the construction was interrupted when the fourth floor was built: already made themselves felt subsidence problems. The work continued in 1275 under Giovanni di Simone and Giovanni Pisano, who added onto three floors. To compensate for the tilt of the tower, the floors were built with some displacement in the opposite slope. The belfry was completed only after a century.

The construction of the Tower consists of two main parts: the base and the belfry . The base is a solid wall, decorated on the first floor gallery and big blind half-columns. The arches of the gallery of diamonds were placed of polychrome marble, centered with roses. In some places the walls of the base had been done by simple single windows. The tower has a single entrance, located on the west, between two powerful legs. The gates are flanked by pilasters with Corinthian capitals, supporting a carved architrave . The above semicircular arch with archivolt is decorated with relief and polychrome decoration. Above the first floor there are six floors with covered galleries. Inside the base is a hall of fish, so named because of the bas-relief depicting the fish on the wall. The hall has no ceiling and is illuminated by the sunlight that falls out of the hole in the center of the belfry . The tower has three steps. One of them leads to the first floor to the sixth, where the exit is on the outer gallery, the second leads to the sixth floor of the seventh, and the smallest staircase leads to the roof. In the belfry there are six bells, the heaviest of which weighs 3.6 tons and the lightest 300 kilograms. Most of the bells were made between the 16 and the 17 centuries, and the Leaning Tower of Pisa is the oldest bell made in the 13th century. The height of the tower is of 58.36 meters above the base and 55 meters above the ground level. Its weight is estimated at nearly 14 500 tons, and the center of gravity is located at a height of 22.6 meters. The foundation of the tower has a radius of 19.58 meters, while the inner hole -4.5 meters. Thus, the tower is based on a land area of 285 square meters and creates a pressure in 497 kPa. At this point the deviation from the vertical axis is of 5.5 degrees. It is caused by uneven subsidence foundation: the difference in the levels of its various parts reach 2.3 meters. As the center of the mass of the tower (an imaginary line drawn down the center of gravity of the tower) is still on the foundation, the tower did not fall. The sediment of the soil is associated with the peculiarities of its composition. This area is dominated by clay, which in the course of its geological development severe pressures haven’t been and therefore the area retained its strength. In addition, the compounded the presence of groundwater can cause a movement which can lead to unpredictable effects. Despite the fact that since the construction of the tower its slope increased markedly during its existence there were periods when it was in a static state, and even reduced the slope. The first major study on the inclination of the Tower was conducted by the British scientists in the early 19th century. They showed that the tower has reached its equilibrium, and no longer moves. However, after several years of imprisonment, for aesthetic reasons, it was decided to remove it from the base of the tower ground that not only violated the balance of the tower itself and caused further inclination, but also contributed to the displacement of the groundwater, resulting in other buildings in the area.In the 20th century the International Commission for the Conservation of the Leaning Tower was formed. The studies conducted by the commission, showed the reality of a danger of collapse and the bell tower in the period of 1990 - 2001 period was taken to strengthen. Some floors were fastened an iron frame, there are special counterweights weighing up to 900 tons preventing a possible further slope. It is believed that these measures have resulted in a tower to a position in which it was about 200 years ago and will keep the tower to the public for at least another three centuries. At the moment, the restoration of the stone tower comes to an end and it should be completed in 2010.

Write your Review on The Leaning Tower of Pisa and become the best user of Bestourism.com

Maps of The Leaning Tower of Pisa 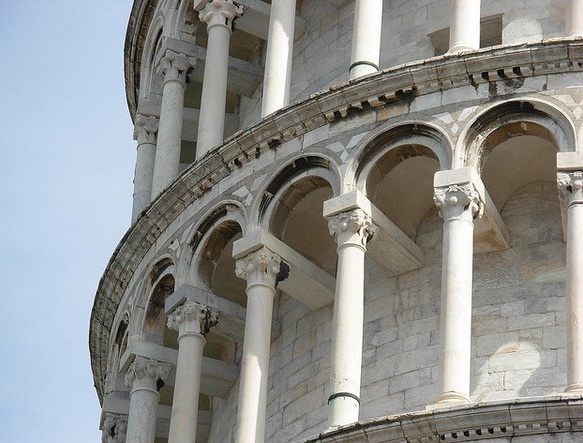 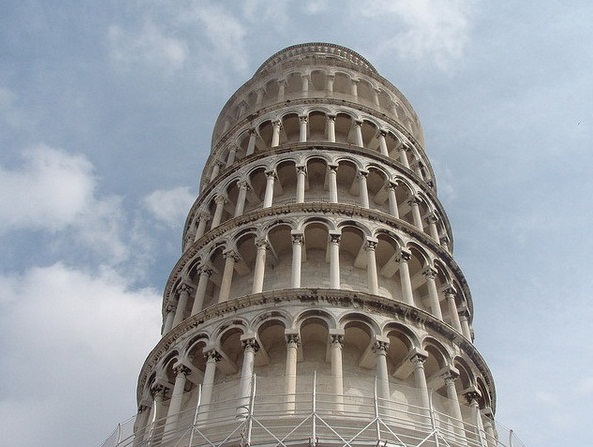 The Leaning Tower of Pisa - Impressive example of Romanesque architecture 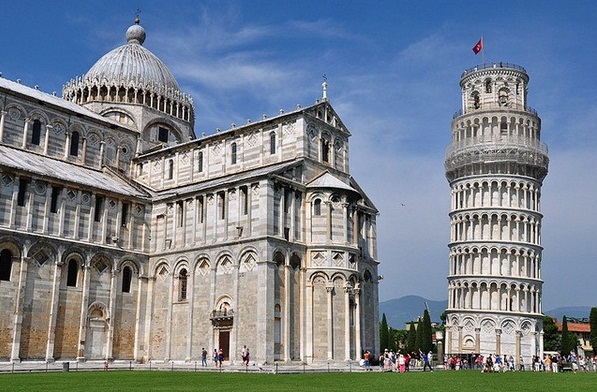 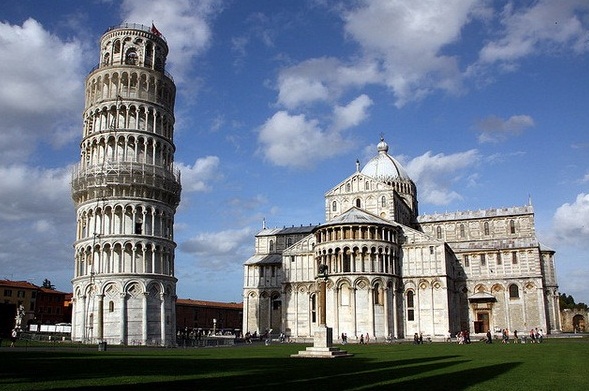 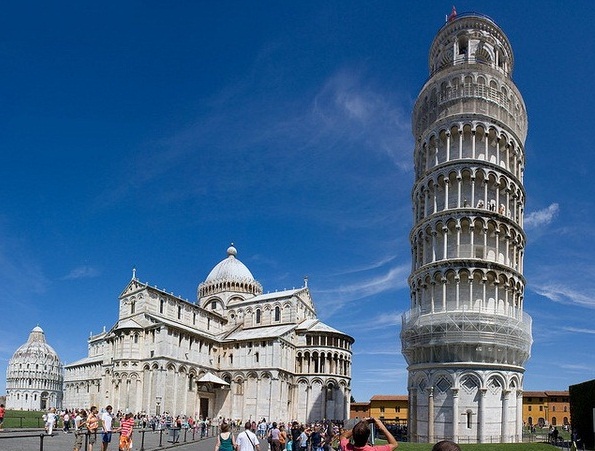 The Leaning Tower of Pisa - Ancient wonder of the world

Video The Leaning Tower of Pisa