The Two Towers of Bologna


Two of the most famous towers of Bologna are located in the city center, in Piazza della Mercanzia, approximately 200 meters from the Piazza Maggiore. In the Middle Ages the towers in Bologna were very popular. They combined safety with the residential functions. Protection was needed not only against external enemies. Almost 50 years of struggle lasted for investiture (the right to appoint bishops), especially aggravated between the Emperor Henry IV and Pope Gregory VII in the 11th century. The researchers attributed the erection of the towers in Bologna as a period of the struggle, the Citizen's Section. In addition, the tower clearly demonstrated the power of the owner. In the 12-13 centuries the city had 80-100 towers (other sources put the figure 180, this number is somewhat exaggerated). In the 13th century, many towers were destroyed or attacked themselves. In later centuries, the rest of the tower was used differently: as living quarters, as shops and prisons. The demolition of the last towers occurred in the 20th century, when the city wall with towers ages 12-13 had been destroyed. Now the city has less than 20 towers. Azinelli (97 m) and Garizenda (48 m) are the most famous of the towers of Bologna.

In the early 11th century a young man lived in Bologna. He delivered with Reno River gravel and sand for the construction work in the city. He had a pack of donkeys, that’s why it was called Azinelli (“asino”- ass). Once he saw a beautiful girl through the window of one of the palace and fell in love with the beautiful girl so much that he decided to ask her hand from the girl's father, a wealthy and a noble gentleman. The rich father decided to respond to the request with a joke :"When you will build the highest tower in the town, I will give you in marriage my daughter." Poor Azinelli got very upset his life was not in joy, but then luck decided to help him. One day while working on the river, the boy saw something shiny. It was a treasure of gold coins. Wasting no time, he hired builders, and in 9 years the tallest tower of Bologna grew in the heart of Bologna. Azinelli was finally able to marry his beloved. The city officials became owners of Azinelli tower in the 14th century. It was used as a prison and a fortress. Between the two towers at a height of 30 m above the ground a wooden shift (burned in a fire in 1398) was built. In 1488, at the base of the tower a small fortress, which served as a watchman for the soldiers was built. Many scientists as Giovanni Battista Richcholi (in 1640) and Giovanni Battista Gulelmini (18th century) used the Azinelli tower for their scientific experiments. In the 20th century the tower was used as a television and as a point of observation during the Second World War.

The Azinelli tower is one of the tallest towers in Italy. The Garizenda Tower, the famous lines from the "Divine Comedy" of Dante says: How Garizenda  comes under the overhang, if the vertex was getting a little Towards a cloud at a height of heaven ... too tilted. For this reason, the tower is called not only the two towers, but the Leaning Tower. According to the legend, the tower was bulit to Odda and Filippo Garizendi. The Garizenda tower was higher (60 m), but in the 14th century due to the subsidence of the soil structure, the tower was considered dangerous, and it was decided to shorten the tower. From the 15th to the 19th century the Garizenda tower was owned by a textile corporation, then the building became the property of the city. Now Azinelli and Garizenda are the main symbols of Bologna and one of the most attracting places to visit.

Write your Review on The Two Towers of Bologna and become the best user of Bestourism.com

Maps of The Two Towers of Bologna 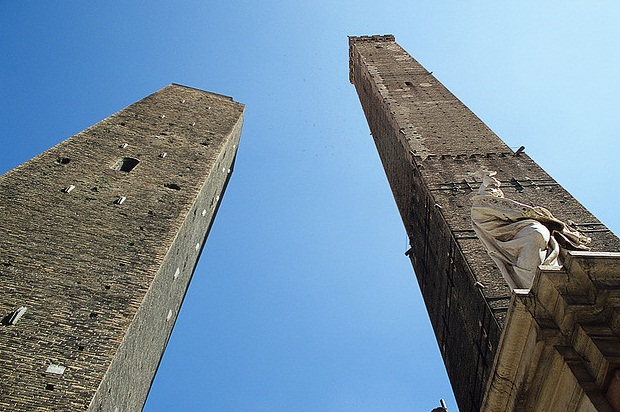 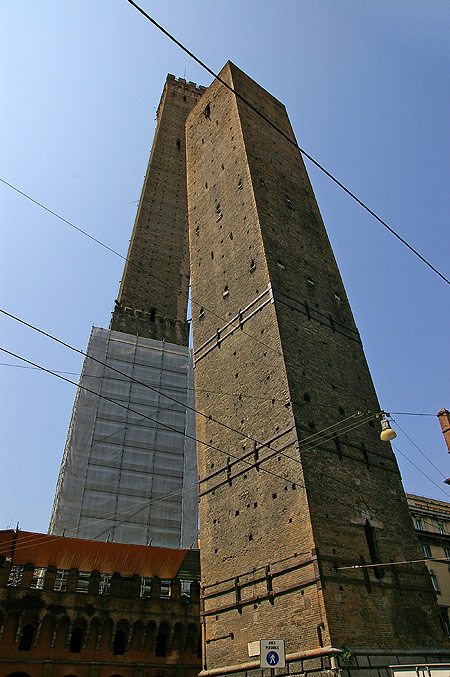 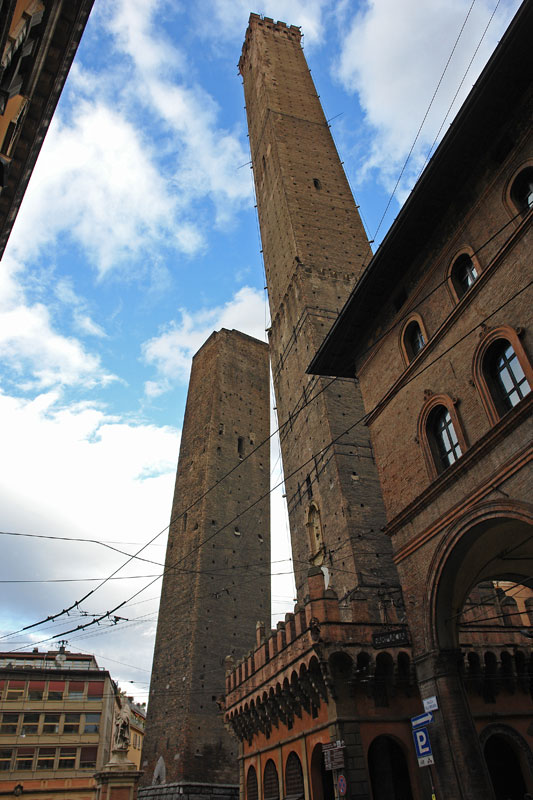 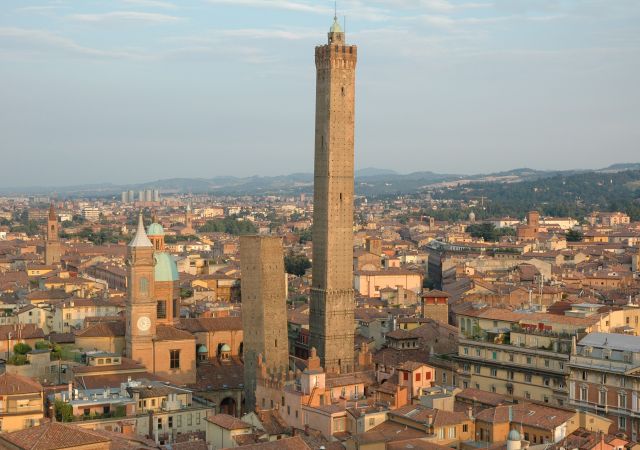 The Two Towers of Bologna - Fantastic view of the towers

Video The Two Towers of Bologna