The Shiveluch volcano is the northern most active volcano of Kamchatka , located in the northern Central Kamchatka Depression. The diameter of its base is of 45-50 km and it has an area of not less than 1300 km2. The absolute height is of 3283 m ( of the main peak), the highest point of the existing apparatus (Young Shiveluch) is of 2800 m. This is one of the largest volcanic structures in Kamchatka. The modern volcano comprises three main elements: the Old Shiveluch, the ancient caldera, an active Young Shiveluch.

Activity of the volcano

The Old Shiveluch on the morphology and geology should be considered a difficult constructed stratovocano. The base of the stratovolcano is composed of a strong layer of coarsely fragmented significantly andesite. In the central part is dominated by a variety of tuffs. The diameter of the crater is of 6 - 7 km. Some of the domes are connected short and the thick lava flows. Prior to the eruption of 1964,the apical part of the volcano was formed by four domes. After the explosion in 1964, these domes were destroyed and in their place a dual crater with steep walls up to 600 m diameter crater north - 1.7 - 1.8 km south - 1.9 - 2.0 km arose. These craters were formed here before, as evidenced by the well-preserved fragments of their shoulders. The Shiveluch volcano began to form about 60-70 thousand years ago. Originally it was a huge andesitic stratovolcano pyroclastic significantly. Its growth was accompanied by the formation of numerous volcanic extrusive domes. Later on the side of buildings were cinder cones and lava, centers of the outpouring of numerous lava flows of andesite, of basalt composition, andesite extrusive domes. A major event in the life of the old volcano was a giant eruption of Shiveluch, resulting in the 9-km in diameter caldera. This event occurred before the second phase of the Pleistocene glaciation. Further, the bottom of the caldera has been the main arena of the manifestation of the volcanic activity. Dominated by powerful explosive eruptions the Holocene volcanic activity of Shiveluch has not undergone fundamental changes. The volcano is dominated by explosive eruptions of varying strength, during which the major emitters are of juvenile pyroclastics. When the most powerful eruption volume of pyroclastic material reaches 4-5 km, their Tephra falls out within a radius of 500-1000 km, covering an area of Kamchatka and adjacent marine areas. For each eruption of a volcano formed at the foot of the plains area, pyroclastic flows of several tens of square kilometers and thick deposits of explosive power of 10-50 m cover more extensive areas . In Holocene a modern building of young Shiveluch was formed and there were several extrusive domes. All in the Holocene there were at least 60 large eruptions of Shiveluch. Several strong eruptions occurred in the early Holocene 10,5 - 7000 years ago. Holocene volcanic formations (Young Shiveluch buildings, deposits of pyroclastic flows, explosions) currently occupy an area of about 300 km2.

Write your Review on Shiveluch and become the best user of Bestourism.com 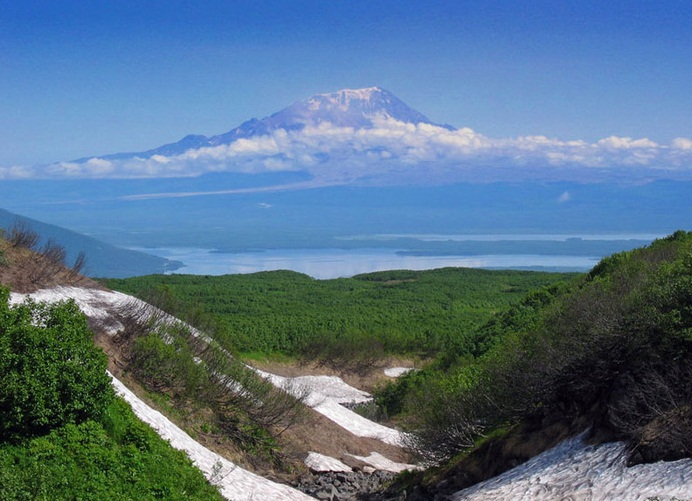