Ski Montafon is a tradition. Finally buzzed in Tschagguns in 1947 the first chair lift in Austria. Today it focuses on four major lifts Ski areas , supplemented by a number of truly local ski lifts and family, for which there is a common ski pass there.

Shortly after Bludenz must be careful and must not miss the turn into the Montafon, or rushes you on the highway in the direction of the Arlberg. But that never happened, because who in the Montafon want is either regular or already has chosen his holiday destination programs. In the winter months in the Montafon Vorarlberg an impasse, the back door of the Silvretta high alpine road is closed, and so will automatically intercourse with every meter from the valley. Only until Schruns-Tschagguns , the heart of the 39 km long valley with its eleven locations around 18000 beds and about as many inhabitants, it is still quite lively. Then distribute the traffic flows, with much the same score in Doppelort Schruns-quarters relates Tschagguns.
The V enefits are obvious: Here to stay very central , between the ski resorts and Hochjoch Golm and within sight of the Silvretta Nova , the largest ski resort in the valley. In nearby Montafon , Vorarlberg's largest sports and leisure, there is also next to the classic winter sports enough, and - important not only for sun lovers - the situation is very sunny. Other hand, in Schruns-Tschagguns also celebrate good that night and après-ski well-know fans appreciate.
For peace-seekers
Those seeking peace moves, just keep up the romantic side valleys. After about Argent, a tranquil resort with direct access to ski Hochjoch , but also with its own small, very friendly and sunny ski area on Mount Krist. Or to Gargellen , the highest village in the area to the extreme snow skiing Schafberg . Here is the winter home of the meter thick snow on the roofs of the village, the idea of a winter fairy tale comes very close already.
Winter and snowshoe hiking , however estimate Bartholomäberg that a sunny balcony above Schruns is on. A dream situation, which has only one drawback: before the door there are no lifts, skiers must go to one of the neighboring ski areas also.
Away from the main traffic route through the Montafon and thus also very quiet located with direct access Vandans to the ski resort Golm. Loud is again church in St. Gallen, eventually leads from here a long cable car up a steep forest slope in the Silvretta Nova.
In the Silvretta Nova
Other entry points into the skiing highlight of the Montafon and are Gortipohl Gaschurn. Gaschurn Partenen forms with the valley's largest town in Vorarlberg, up to the Piz Buin 3312 m), the highest peak in Vorarlberg, in the Silvretta range (. However, the city is known also for the writer Ernest Hemingway , the middle of the 20s of last century in the Post Hotel Rössle lived and skiing in the Silvretta is broken up by gas churn. At first glance, the resort and ski areas are indeed somewhat apart, but with the Montafon ski pass , which for all cable cars and ski lifts of the valley is, this is no problem. The card can also Montafonerbahn Bludenz - Schruns and public transport are used in the valley, so you do not rely on your own car that is his.
Sponsored Links

Write your Review on Montafon and become the best user of Bestourism.com 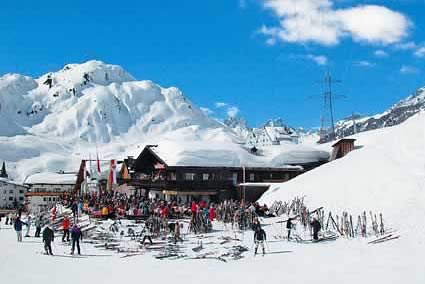 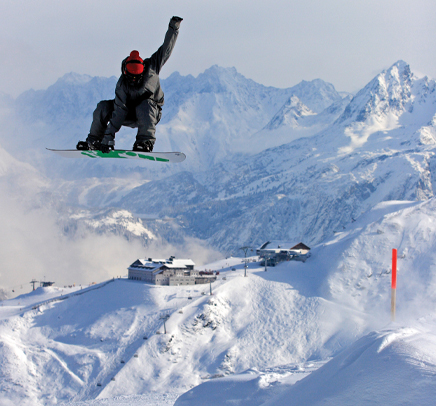