This hotel (which is still in the phase of a concept) will be the first underwater luxury hotel and the first hotel (self-proclaimed) of 10 stars in the world. Located in Jumeirah Beach at 20 m under water, the construction will have a concrete and steel structure. Plexiglas walls and the ceiling will allow residents to admire the beauty of the ocean in its true colors. Although it was scheduled to be opened in 2006, due to technical difficulties of building an underwater hotel, the project was delayed. Status: Concept. Estimated cost of the project: $ 500,000,000.

The man is so constituted that he dreams to know the unknown, to conquer the inaccessible and the invisible, to behold ... Even Jules Verne dreamed of Nautilus, the inverse image of the submarine, which served as a Captain Nemo at the same time and home. By contrast, modern architects have gone much further and decided to create this underwater world that is fit for the human life.

In 2003, the architectural competition of the Wall Paper Magazine has won the "Hydra House’’ project. Its author, architect Jennifer Siegal, has developed a model of underwater structures very similar in appearance to the hydra. These homes, like an animal prototype are able to "stick" to each other, forming a colony. Unfortunately, the settlement cannot be fully autonomous - electricity and oxygen, as well as fresh water will have to strike through the hoses (pipes) from the surface. But while the project remains on paper, another called “Hydropolis” is already under implementation.

Hydropolis is a great 10 star hotel, which is planned (and the work has already been started) to raise the water at the bottom of the Persian Gulf near the Jumeirah Beach in Dubai. The developer of this grand building is a German architect Joachim Hauser. Some years the dream of implementing the project waiting in the incarnation behold, only the United Arab Emirates found investors to invest in the construction more than half a billion dollars. With these bailouts the estimated cost of one night in this fabulous underwater world will be $ 5500. The preparatory work began in summer 2005 after the issue of funding and conducted sonar survey of the bottom had been completely resolved. Hydropolis involved about 150 companies from around the world in the construction. It attracted professionals with experience in the construction of submarines and offshore oil (gas) plants. So,Hydropolis will be located at a depth range of 20 meters (66 feet), and part of the structure shall be exalted above the water. The object will occupy an area of 260 ha, which is almost equal to the size of London's Hyde Park. The basic materials for the construction will serve as concrete, metal and plexiglass which make the walls strong-box. It is produced in a special plant for a special technology that allows to obtain a material thickness of 41 cm which can withstand water pressure at depths over 20 meters. All the underwater structure will resemble a huge jellyfish, in the "womb" which will be located at 220 apartments class "lux". Through the large windows the guests can watch an amazing underwater world, with such "windows" to be deployed not only in the bedrooms, but in the bathrooms too. The area of the underwater complex is of 75 000 square meters. The guests will be delivered to a place of rest planned for a high-speed train on the silent underwater tunnel with a length of 515 meters from the ground station, located on the shore.

The main inspiration, the project architect and the designer, Mr. Houser wants to create a structure that is close to the human physiology. In his view, the structure and the design of the building should be as comfortable for a stay not only at a conscious but at the subconscious level. He suggested as the primary geometric elements using figure eight, done in a circle. The delimited space will be divided into restaurants, bars, conference halls and "luxury" rooms. Thus, the "insides" Giropolisa can be compared with the systems of the human body. What appears to area: bars and restaurants symbolize the digestive tract, and the conference rooms and media centers : the brain. A wave-like element of building an area of 30,000 square meters will be exalted above the water surface. The project will create two transparent domes, inside which a ball-room will be settled. The roof of the ballroom will be like a stretched lobe, and it will be able to unfold where parties and open-air shows will take place. The ground-based multi-level 120-meter station will also have a multifunctional value. It is planned to welcome guests, and monitor logistics of the underwater part of the complex. On the upper floors a plastic surgery clinic, a marine research laboratory, three bars, three restaurants, a library, a museum, a private cinema, souvenir shops and prayer rooms will be located. At the lower levels will be a room service staff, warehouses, loading areas and parking lots. The observation deck on the roof will survey the neighborhood of Dubai, as well as a splendid view to the whole Hudropolis complex.

The Hydropolis Project is ambitious in many ways. Thus, in addition to an impressive architectural design and underwater location, the building will be one of the most high-tech hotels. Each room will be equipped with an adjustable control panel to change your lighting, shapes, sounds and even smells. The transparent dome above the water surface at night will highlight the huge colored spotlights and at daytime an artificial cloud generated by a special mechanism will protect guests from the scorching rays of the Hydropolis sun. The most impressive, however, is a security system. The underwater part is divided into sections, which in case of fire or flooding sealed bulkheads overlap. In case of terrorist attacks the whole complex will be equipped with missile defense. It looks like a fantasy, but in Dubai the most incredible projects are translated into reality. Of course, the Hydropolis model has its shortcomings that push open for at least another year. Perhaps the problem with funding or technical defects lead to a reduction in construction, but do not freeze it, because the authorities care about the prestige of Dubai and the dream of being "ahead of the rest." Meanwhile, the race is a project of underground worlds which continues to approach the realization of another, already Chinese. The opening of the deep-hotel, located at the bottom of the Yellow Sea near Qingdao, according to some will be timed to the Beijing Olympics and will be held in 2008.

Write your Review on Hydropolis Underwater Hotel in Dubai and become the best user of Bestourism.com 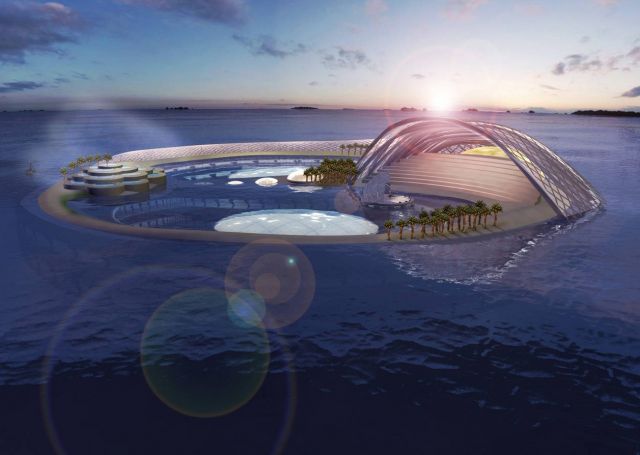 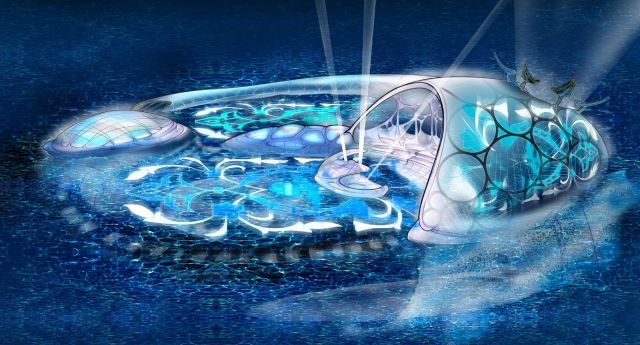