World Tourism / The Cleanest Places in the World / The Galapagos Islands


The famous marine explorer Jacques Cousteau once mentioned, "The Galapagos Islands” is the last sanctuary of wild life. It is a place where animals are not afraid of people, creating a natural paradise for those wishing to escape from busy and noisy world. " The experience of traveling in the Galapagos Islands becomes unforgettable for even the most experienced traveler! There are some of the most isolated and cleanest islands in the world and the Galapagos Islands is among them. The archipelago is famous for turtles, iguanas, sea lions, penguins and whales. Because of its isolation, its plant and animal world developed apart. Currently, five of the islands are inhabited, with a population of approx. 23,000 inhabitants. The whole archipelago is composed of 13 large and medium islands and islets and several, nearly deserted rocks. According to specialists, they were formed by the eruption of volcanoes approximately 4.5 million years. In 1835 Charles Darwin visited the Galapagos archipelago and these islands are known as “ the scientific world that changed the planet“. Each island is different from other species and surprises the researchers. Galapagos from the Spanish word “ galápago “ means water turtle species and it is an archipelago in the Pacific Ocean , 972 km west of Ecuador , which consists of 13 main volcanic islands, 6 smaller islands and 107 rocks and alluvial areas. It is believed that the first island was formed 5-10 million years ago as a result of tectonic activity. The youngest of the island Isabela and Fernandina , still in its formative stages, the last volcanic eruption occurred in 2005 .

Galapagos Islands territorial state is owned by Ecuador . The population of the archipelago is about 30 thousand people with an area of 7880 km ². The islands are known primarily for the large number of local species of fauna and research conducted here by Charles Darwin , which became the first impetus to the creation of the evolutionary theory of the origin of species. The Galapagos Islands , Ecuador’s pearl paradise with amazing nature and wildlife are a major tourist attraction in Ecuador. Fishery occupies an important place ( tuna and lobster are caught ), but the main economy of the Islands is tourism, which a fabulous world of unique animals and plants to people. The Galapagos Islands can be visited any time of year. The warmest season with clear skies, lasts from December to May, but the clear sky does not guarantee the best conditions to observe its wildlife. If you are a diver, the best time to visit the island is from June to November, because at that time the water temperature is the lowest. To say that the underwater world of the Galapagos Islands is rich enough, it does not say anything. The underwater world is just teeming with all sorts of wildlife - huge schools of hammerhead sharks of impressive sizes, silk, Galapagos, gray reefs, white tip sharks, giant stingrays, turtles, and countless moray eels, schools of tuna. It is important to note that everything that swims, crawls and lies just beneath the waters of the same Red Sea, three times less than the underwater belong to the inhabitants of Galapagos!

The most famous Galapagos Islands:

It was built in interaction with the Spanish Research Center. The Center provides an introduction to the Galapagos Islands, the terrestrial and marine life, flora and fauna. It is located outside the small town of Baquerizo Moreno (the capital of the Galapagos Islands.)

The journey to the hill takes about 20-40 minutes. Upon reaching the place, tourists will enjoy fascinating views over the white beaches on one side and the roofs of Puerto Baquerizo Moreno, on the other side. The hill is often visited by the frigates, which give it its name. Majestic Grand frigates can be seen there. This is the perfect place to learn the difference between these two species. Here you can enjoy safe snorkelling, this is the best place for beginners, with weak currents and a great opportunity to see stingrays, fish and fish-barber-tie.

The island of Hispaniola.

Located on the northeast coast of the island of Hispaniola, Gardner Bay provides an excellent beach for relaxing, swimming and an opportunity to observe sea lions. Here visitors can watch the sharks in the crystal clear ocean waters.

This rocky headland provides shelter to the most impressive and varied colonies of sea birds on the Galapagos Islands (albatrosses, frigates, gulls Galapagos, Galapagos hawks, etc.). High cliffs from the sea grow along its southern shore, offering tourists to watch the birds soaring and the air vents, where the water is released into the air to a height of 30 meters in accordance with the intensity of the surf.

The island of Floreana.

For a long time in this place is a wooden barrel that was placed here in 18th century whaling ship crew. And from that time a barrel is used by sailors and tourists as a mailbox. The idea is that the letters and the postcards are delivered to their destination by hand, if the tourist finds a letter addressed to near his residence, at the request of the tourist can take this letter and return home to convey to the recipient. Why not? Try it, maybe it still works!

Perhaps, this place is the biggest and the best flamingo lagoon in the Galapagos Islands. Located between the Cape of conical nozzles it gives the place a particular atmosphere. There are several types of Kukui, which can be seen next to the flamingos. Herons, Barnacle migratory ducks and other birds are the most common. There are two interesting beaches: Green beach (with a high content of olivine crystals in the sand) and the coral beach with white fine sand.

Despite the fact that most visitors to the Galapagos Islands come here to appreciate the surrounding natural environment, here at the station will also be interesting to study and learn about all the efforts aimed for the protection and the preservation of the islands. One of the most important places of the station is the National Park Information Centre.

Showroom Van Staelen is the centre for breeding and raising young turtles, where you can see the famous Lonesome George (the only remaining tortoise of his species, was found and brought here from the island of Pinta), as well as adults to see Galapagos tortoises in captivity.

They are located in westward from the Bay of the Black Turtle. The sand beach was formed from decayed coral, which made it white and soft, making it the perfect place to lay eggs of marine turtles. For one of the beaches there is a small lagoon with salt water, where you can see flamingos randomly and other coastal birds such as curlews.

The way to Highlands area begins from Bellavista and passes through the agricultural zone, close to the National Park Baundary, Miconia Zone and then goes through the zone and fern-sedge zone. On a clear cloudless climate, this region contributes to the beautiful scenery of the descending hills, volcanic cones, extensive vegetation zones during the year.

The way to Tortuga Bay is ideal for bird watching. It's easy to see several species of finches. Many people think it is a beach of white fine sand-like powdered sugar, the best in the archipelago. Even if the air temperatures are greater than 30 degrees, the sand is slightly cool to the touch and very soft. The name of the beach from Spanish means "turtle" because of the sea turtles that come here to lay eggs. There are beautiful sunsets, and although the main beach is used mainly for surfing, the west bay is the perfect place for relaxing, swimming and snorkeling. It also can be seen flamingos, marine iguanas, pelicans, curlews.

All you can see in the Galapagos Islands is impossible to describe, but difficult to convey feelings! Because when you are there, you cannot believe what you see. You must feel!

Write your Review on The Galapagos Islands and become the best user of Bestourism.com

Maps of The Galapagos Islands 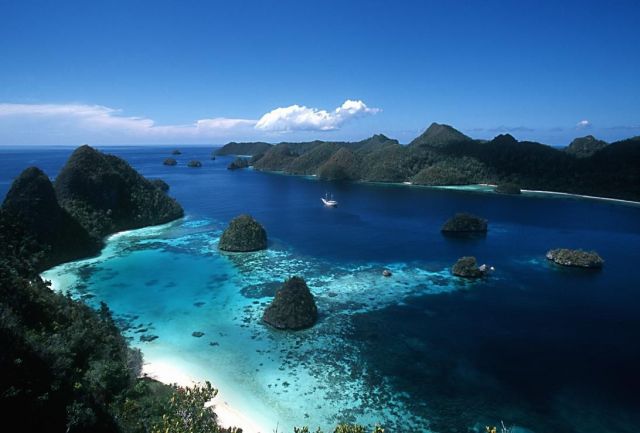 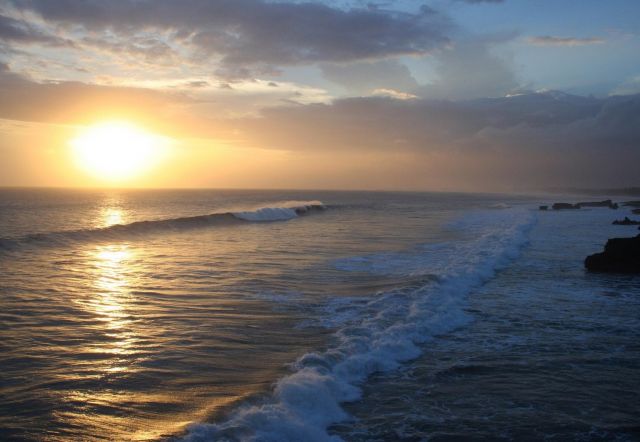 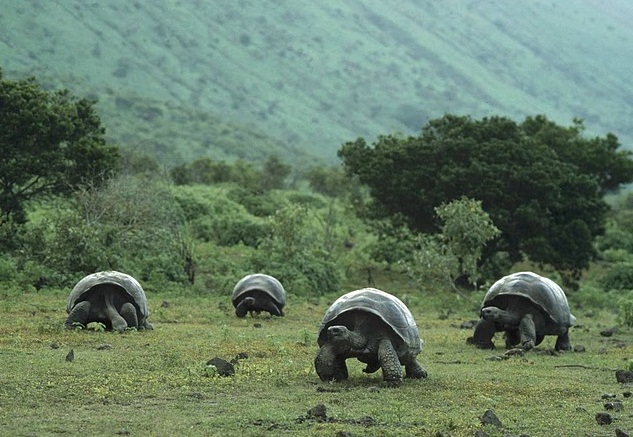 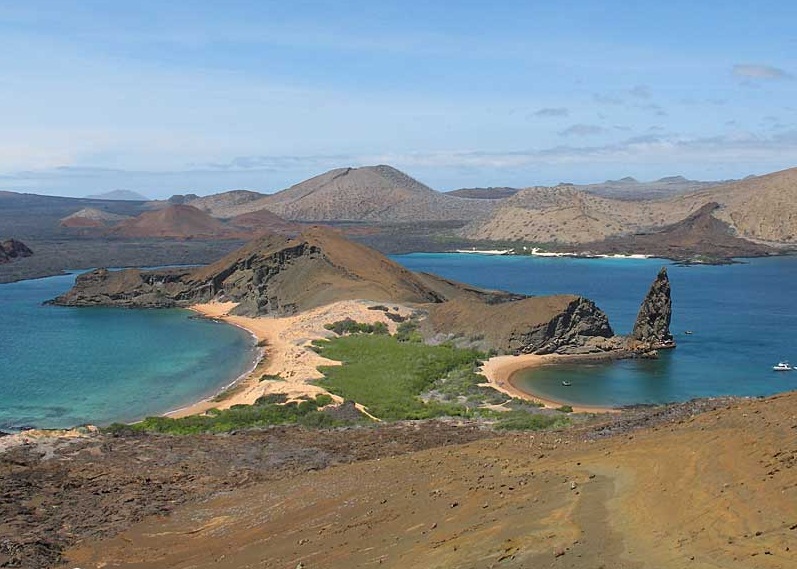