Between 1400 and 2900 meters altitude extends the high-altitude ski area in the Silvretta Arena . is an amazing range ski resort of Swiss duty-free Samnaun to Fimbatal.

The slopes offer everything winter sports fans want: perfectly groomed slopes and high capacity lifts . But Ischgl is more than just a ski resort, Ischgl is a philosophy of life . Immediately after the tunnel exit is built on the site as a defiant castle.
Comfort Holidays in Ischgl
Each square on the narrow spot of the valley is used optimally, with impressive four-and five-star hotels . Almost every hotel can be considerable spa area called a house.
Comfort accompanied the skiers and snowboarders in the morning on the way to the various base stations: a comfortable pedestrian tunnel with moving walkways transported quickly and easily the one side to the other village. This way you can reach the lifts almost any hotel from the comfort of walking.
The lifts in the ski area can be in terms of comfort, nothing to be desired. Lifts are easy only a few. Instead, promote high-performance four - six-and eight-seater chair lifts, winter sports enthusiasts on the sunny Idalp and the Alp Trida - of course under protective weather hoods, should the sun from the sky views are not laughing.
Music and attractions
Legendary are the Top of the Mountain concert at the e Idalp with which the winter season in early May will be terminated. As early as 1993 came to an end of season, the former striker hit parade "Boney M" to ". Then followed an international star after another: Sir Elton John, Tina Turner, Diana Ross, Jon Bon Jovi, Bob Dylan, Rod Stewart, Sting, Udo Jürgens, Ronan Keating and Peter Gabriel.
Thus offers Ischgl always new attractions and has continued to set trends, as with the convention center Pardorama at 2,620 meters altitude. With a fantastic view from the restaurant in the fully glazed cube of the imposing peaks of the Silvretta group can dine splendidly.
Even after the skiing offers Ischgl one choice, which always surprised: From a romantic candlelight dinner , through experience catering to the traditional plain enough the culinary bow.
Sponsored Links

Write your Review on Ischgl and become the best user of Bestourism.com 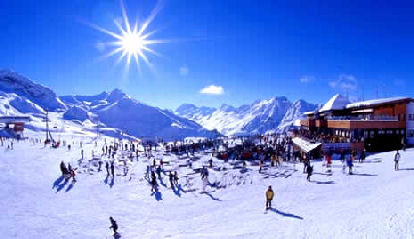 Ischgl - A snow-bound Ibiza in Austria 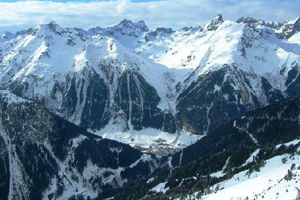