The Pickle Barrel House is a two-level cabin, carved out in two barrels. The home design is taken from the comic book "Tiny Uiniz". The unusual home adorns the south shore of the Superior Lake, Michigan.

There is a living room on the first floor of the big barrel and a bedroom on the second floor. The little barrel is the kitchen. There is a pantry in the hallway, which links the two barrels. The project author is William Don, a cartoonist. He created the cartoon characters in "Tiny Uiniz" in 1914. The comic book was about the tiny people in the world of normal size things. There was the barrel house among these things.

The artist decided to make a gift to his wife and reproduce this cabin, where you really can live in 1926. This family house was used as a villa.

But the construction was very unusual. Crowds of onlookers besieged it. Every year, they became more and more in number. Finally, after ten years, Don broke and moved. More precisely, he moved the house. The Pickle Barrel House became a stall. They sold food, souvenirs there. But the various tenants didn’t take care of the house and the building fell into disrepair.

The local Historical Society acquired the house in the property and repaired it, bringing it to its original form in 2003. This unique home is a tourist attraction now.

Write your Review on The Pickle Barrel House and become the best user of Bestourism.com

Maps of The Pickle Barrel House 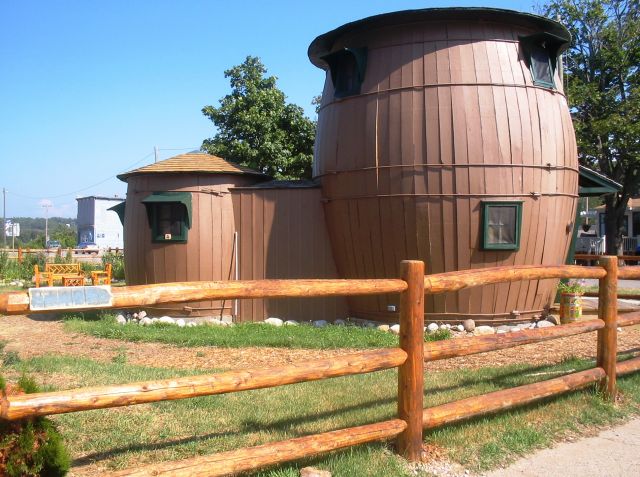