A variety of slopes and challenging variations, traditional villages and trendy après-ski bars - these are attributes that can combine a ski resort is usually difficult.

St. Anton am Arlberg creates this balancing act, and offers experienced skiers possibilities, as is normally only in the Western Alps are they - especially off the slopes . That is the reason why here the international scene Free Rider meets and the bars in town is predominantly spoken in English. But at the same time with the St. Anton offers hotel village branch in St. Christopher at the pass and the now also part of the ski belonging Stanzertal also peaceful sides, where one remains a cozy Tyrolean language and way of life to maintain.
Scrupulous search on the map does not own success: There is no mountain called Arlberg . The term for this region is derived from the trees out, here are growing: There are mountain pines or just Arlen, like say the Tyrol. The Arlberg is one of the snowiest ski resorts in the Alps : from the northwest discharged the next lows here because of the Arlberg first serious obstacle to that.
This snowfall was also the very beginning of the 20th Century, the skiing in the Arlberg was popular. 1901was in St. Christoph, the legendary "Arlberg Ski Club" founded, and soon found the first ski race instead. 20 years later decided the "Arlberg-king" Hannes Schneider Arlberg to found the school, but ten years later the first ski lift in Austria put into service, and success story began.
Although it long ago for the entire Arlberg ski pass a joint is, in practice, the area is still divided into two parts: in the southern, largely on Tirol attributable side with St. Anthony, he owns to the villages of St. Christoph and Stuben and St. Jacob and the "northwest", purely Vorarlberg side with less athletic, but mundane places Zürs and Lech . regular track connection between the two sides of the area separated by steep Valluga There is not even today.
As St. Anton in 2001, the Alpine Ski World Cup has chosen to target the sustainable village picture changed: At that time the railway line was laid along with the station, which until then had been cut in two parts of the city. In addition, St. Anton has since presented with a new indoor pool and spa area , the architecturally interesting, and 2000-square-foot multi-purpose hall and a trendy pedestrian zone . That one does not rest on the World Cup investment, shows the new base station of the Galzigbahn that the townscape of this season again decisively changed from.
In a spectacular glass building of the Tyrolean architect Georg Driendl rotates from December, as a world first touted Ferris wheel gondola . This new technique, which is visible from the outside allows for everyone, each 24 guests a level access in the 28 gondolas. Each pod is about the Ferris wheel and brought to ground level after the beginning as the wheel went over the top. All this is not only good but also increased the production capacity threefold. The district offer has grown over many decades and therefore diverse: B & Bs can be found as well as five-star hotels, there are Civil inns, private rooms and apartments.
The fact that the calculated rates are particularly low, nobody will expect serious. something cheaper , you can enjoy in the other, miles from St. Anton to another: in some Stanzertal they all - including the very exclusive St. Jacob - are the ski tracks and ski lifts St. Anton's connected via. Besides the financial aspect is the calmer atmosphere at the neighbors for some holiday guests with a valid argument while looking for accommodation.
St. Christopher , the small, on the Arlberg Pass, situated village, is proud of its founding in the 12th Century , for here foundling Heinrich von Kempten built a shelter for mountain emergency which become travelers - a hospice. Today, the Arlberg-hospice a five-star hotel. St. Christopher's bed offer is compared to St. Anton, modest in number, but high-class quality and the prices are accordingly.
Even the few miles beyond the pass at 1407 meters altitude village of Stuben was the very beginning of refuge for pilgrims and travelers, from a warm room in the place name is to derive the bars.
Hospitality is relatively modest share of bars and ski areas is rather small, however, the local mountain Albona much more than just an appendage in the extensive ski carousel.
Sponsored Links

Write your Review on Arlberg: St. Anton, St. Christoph and Stuben and become the best user of Bestourism.com

Others The best ski resorts in the world .

Others from The best ski resorts in the world

Best ski resorts in the world 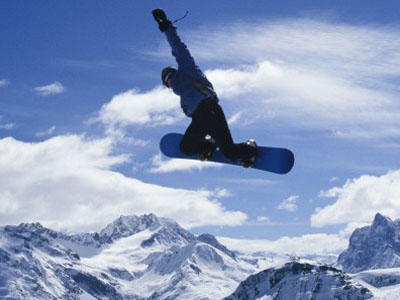 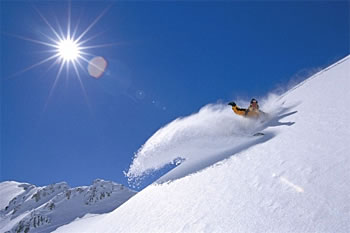