The Fallingwater House is one of the most iconic and famous private houses of the twentieth century.

The installation customer was Edgar Kaufmann Sr., a successful businessman from Pittsburgh. He had some land outside the city, including a waterfall. It took nine months to the architect to make the project. The customer was very surprised that no house had to be built near the waterfall, but over it. The masterpiece construction was accompanied by conflicts between Wright, Kaufmann and the building contractor. Kaufman didn’t like the fact that being inside the house, the waterfall can be heard, but be seen only from the upstairs balcony.

The Kaufmann family spent the weekend in the House over the waterfall since it was finished and until 1963. Then the house was given by Edgar Kaufmann Jr. to the Western Pennsylvania Reservation. The house is used as a museum now. There are 120 thousand visitors every year.

The Fallingwater House can rightly be called one of the greatest masterpieces of the world architecture because of the superb integration with the natural environment and its dynamic volume.

Write your Review on The Fallingwater House and become the best user of Bestourism.com

Maps of The Fallingwater House 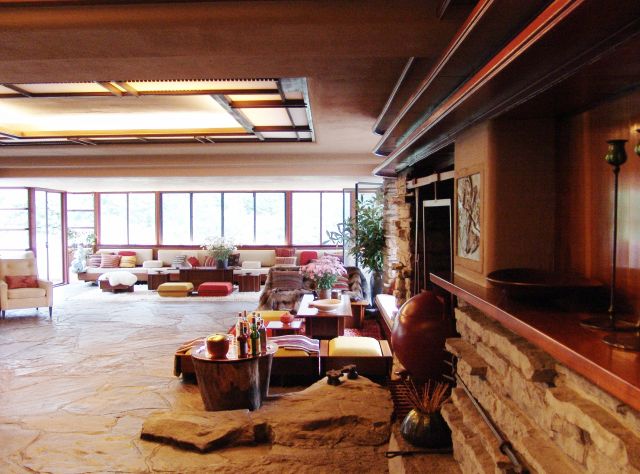 The Fallingwater House - The interior of the house

The Fallingwater House - An iconic house