Destinations / The best sightseeing places to visit in the U.K. / The Tower of London

The Tower of London


About the Tower of London

Near the eastern border of the city the Tower is looming dark. The Tower of London stands on the north bank of the river Thames. It is located in the London borough of Tower Hamlets and it is separated from the eastern part of the City of London. This mighty fortress stands there for nearly nine centuries. Historically, the Tower does not belong to the City. When in the XI century the Normans invaded the British Isles, William the Conqueror started building the fortress of London, not only to keep control of the Thames Estuary, but also to frighten recalcitrant citizens whose autonomy has long caused concern of the rulers of England. The Tower doesn’t refer only to the working East End and docks, which over the time have grown almost close to its walls, the Tower is connected with the other parts of the city too, which primarily lead to Westminster. As well as Westminster, the Tower represented the Royal London. It was the main fortified residence of the kings of England, whereas there had never been a developed system of fortifications in the palace of Westminster. The coronation of the English monarchs took place at Westminster Abbey in the Tower until the end of the XVII century. The English monarchs spent the night before the coronation there. For over three hundred years the Tower stores the Crown Jewels. The Crown Jewels include the world’s most famous diamonds. During the coronation festivities the jewels are taken out of the Westminster under special protection and after the ceremony they are immediately returned. During the long years of its history the Tower performs various functions. In the Middle Ages coin was minted in its walls. Later it served as a State Archive and it was an observatory until it was transferred to Greenwich. The Tower, like many medieval castles, served not only as a fortress and a palace, but also as a prison and a zoo. However, the Tower is not an ordinary castle. In addition to its unusual eventful historical past, it has an extremely interesting peculiarity for the architecture of its oldest buildings. The Tower of London, as we see it today, is a complex of buildings at different times, surrounded by two rows of strong walls with jagged towers and massive gates. In ancient time the walls girded a ditch, which was 36 meters in width. The total area of all its fortifications is of 4,8 hectares, and plus the terrace that separates the Tower from the Thames which is of nearly 7.3 acres. This is not only one of the largest castles in England, but of course, one of the best known places in the world. The Tower is guarded by the Yeomen Warders, also nicknamed “Beefeaters”. Their uniform is at it was in Tudor times and they have two letters inscribed on it, E.R. This means Elizabeth Regina. Their everyday uniform is black and red, but on special occasions they might wear ceremonial uniforms: fine red with golden, black stripes and wide lace-collars.

The White Tower is the oldest and the most important building of the Tower of London. It is surrounded by other towers which all have different names. All in all 13 towers: Wakefield Tower, Lanthorn Tower, Salt Tower, Broad Arrow Tower, Constable Tower, Martin Tower, Brick Tower, Bowyer Tower, Flint Tower, Devereaux Tower, Beauchamp Tower, Bell Tower and the Bloody Tower . The Tower of London was built in 1097 by William the Conqueror to protect and control the City of London. The architect of the Tower by king William’s order was the Bishop of Rochester named Gundulf. The White Tower’s height is of 27m and the thickness of its walls is of 4,5m at the base. Although , if you try to find a white tower, you’ll definitely not find because the tower isn’t white. It was probably named so because its walls where white in the XIII century. The Tower has grey stones. The grey stones of the Tower could tell terrible stories of violence and injustice. Many cruellest and saddest events took place here. Thomas Moore, the greatest humanist was falsely accused and executed here. Among prisoners executed at the Tower were Henry VIII’s wives Anna Boleyn and Catherine Howard. If you visit the Tower of London you will be entertained with many tales, stories, pain and passion, treachery and torture. Execution inside the Tower was a privilege for those of high rank. The memorial to those who died can be found in the the Green Tower. The building was created using cayenne excellent stone from France. According to the legend the mortar which was used in the construction of the building was diluted with blood of animals. But there is another legend attributed to its history. William Shakespeare in his play “Richard III” claims that the White Tower was built by Julius Caesar. St. John’s Chapel The Chapel of St. John’s is located on the first floor. It is one of the finest examples of Normand architecture, a perfect combination of unique strength and surprising simplicity. As it is known everything inside the Chapel is preserved in its original form, except the windows which have been changed and enlarged by Sir Christopher Wren. The chapel is connected with the most significant historical events of the country: It was here, within these walls, where the Archbishop of Canterbury and the Prime Minister had been imprisoned during the peasant revolution. In 1381 they had been taken and brought to the Tower for punishment. This is where the body of Henry VI was taken after he was killed in 1471, and it is here where Mary Tudor married with King Philip of Spain, and here Lady Jane Grey (queen of 9 days) prayed before her execution in 1553 year. The phrase “sent to the Tower” meant that somebody was imprisoned.

The ravens whose forefathers used to find food in the Tower, still live here as part of its history. The Ravens from the Tower have a special significance. It is believed that at least six ravens live in the tower for centuries. According to the legend, if ravens leave the tower, the tower, the monarchy and the entire kingdom will perish. That is why the birds are carefully guarded. Today there are new tower ravens. Their wings are cut to prevent them flying very far. Having lost their freedom, the ravens rest and walk in the small cemetery in the gardens of the Tower. They are cared by the 'Ravenmaster', one of the tower guards ('Yeomen Warders'). Each raven has a name and his own age till 18 years. They are kept and fed with raw meat and even eggs. The most famous ravens are raven Grog and raven George.

The Ceremony of the Keys

The Tower of London is no less guarded as Buckingham Palace, for example, especially since it is considered the official Royal Residence, and moreover, here the Crown Jewels are kept. The locking of the Tower goes back to the Middle Ages. The Guard at the Tower includes 22 soldiers, and besides it there are two special Guards: the Yeoman Guard and the Jewels Guard. An old custom which is practiced incessantly since 1340 takes place here and it is the symbolic closure of the Tower. Every evening, at 21.53 the Yeoman Guards’ commander, wearing a long red tunic and a Tudor bonnet is taking the keys in his hands and a lantern tower and leaves the tower. The first gate which he locks is that from the outside, then the oak doors of the East Tower and Bowyer Tower. At the Traitor’s Gates, the Yeoman commander and soldiers who are escorting wait for the sentry, who, according to the ceremony, asks the leader. “ Halt, who comes there?” “The Keys” is the answer. “ Whose Keys?” demands the sentry. “ Queen Elizabeth’s Keys”, comes the answer. “ Advance Queen Elizabeth’s Keys. All’s well. The Keys are finally carried to the Queen’s House where they are safe for the night.”After the ceremony of the weapons takes place, the commander raises his Tudor Yeoman cap in the air and shouts: "God defends the Queen." At 22 p.m. the ceremony ends, after the keys are sent to the Queen’s Tower. This ceremony was interrupted only once. During the Second World War when there was an air raid on London and several bombs fell on the bridge. The explosions interrupted the ceremony and threw the soldiers down, but they began their mission shortly. There is a letter of apologizing from the guards to King George VI explaining why the ceremony was delayed. And even if the tower is closed for visitors four days a year ( on Christmas and New Year) the Ceremony of the Keys takes place behind the closed doors. Only 40-50 people can see the evening ceremony, which makes the waiting list quite long.

Write your Review on The Tower of London and become the best user of Bestourism.com

Maps of The Tower of London 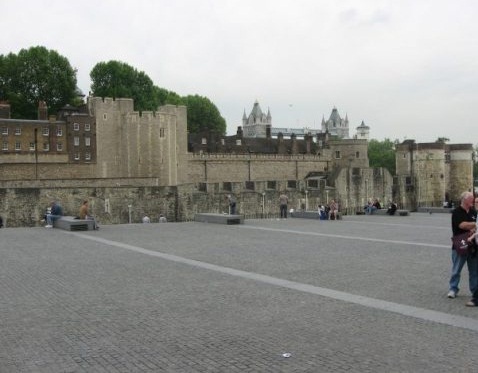 The Tower of London - On the territory 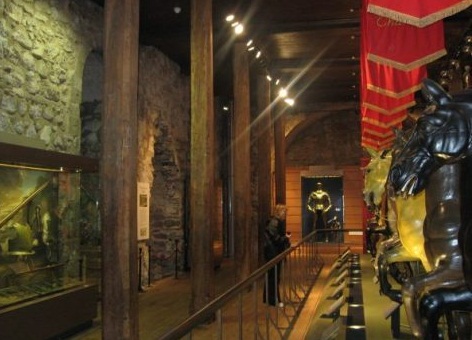 The Tower of London - Interior 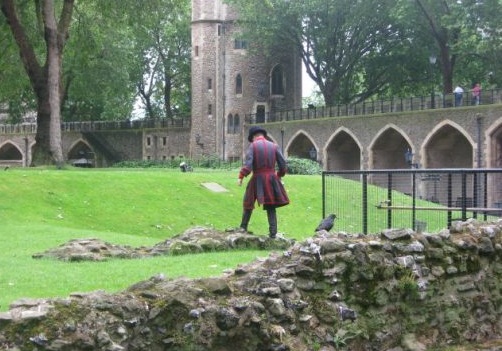 The Tower of London - The most impressive medieval place 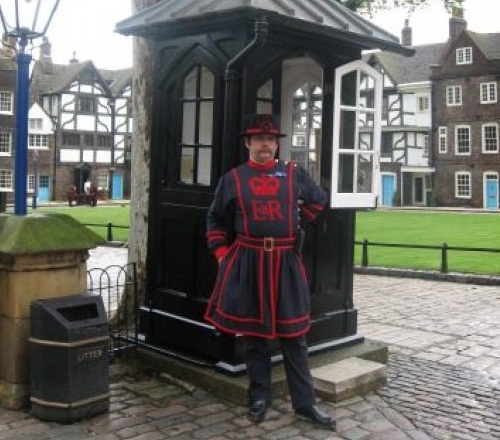 The Tower of London - Yeoman Warder 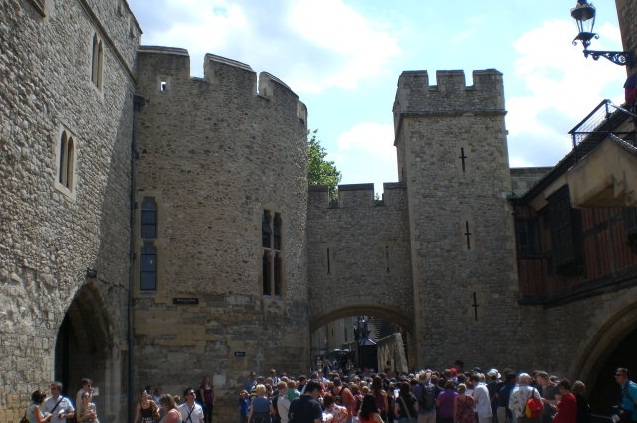 The Tower of London - Visitors at the Tower

Video The Tower of London