Destinations / The most beautiful places to visit in Chianti area, Italy / Greve in Chianti


About Greve in Chianti

Greve in Chianti is a small and romantic town situated in Val di Greve, an idyllic countryside right in the center of Tuscany, in the heart of the Chianti hills covered by olive groves and vineyards, enjoying a splendid location and beautiful panorama. Greve in Chianti rises along the left bank of the Greve river and it is conveniently located halfway between the cities of Siena and Florence, about 30 km away from Florence and 35 km far from Siena, at an important crossroads where the road connecting Florence with Siena and the road between Val d’Arno and Val d’Elsa meet. This lovely medieval town of Greve in Chianti is the unofficial capital of the Tuscan wine region, as it is set in the heart of the Chianti Classico wine producing area, one of the most important wine districts in Italy –for this reason, it is often referred to as “the city of wine”.  The surrounding scenery is considered one of the most picturesque in the country and representative for the amazing region of Tuscany. Greve in Chianti is also one of the historic gems of this region. The place is rich in historical monuments, among which an ancient castle and church. You can stop at one of the numerous wine cellars here and taste some of the local Chianti Classico accompanied by delicious Pecorino sheep cheese and fresh local bread.

History of Greve in Chianti

The name of the place comes from a compound name which includes "Greve", the name of the river along which the locality is situated, and "Chianti" referring to the name of the area where the town is located. The town was originally called Greve and was renamed Greve in Chianti in 1972 after its inclusion in the Chianti wine district. The first settlements in the area of Greve in Chianti go back to medieval times, as the archaeological finds date back to the Etruscan and Roman Ages. Yet scientific research proves that this territory and its surrounding area  had always  been inhabited, long before the Etruscan and the Roman civilizations established their settlements here. The first historical document that mentions Greve dates from 1085 –this is the year when Bernardo degli Uberti entered the Vallombrosian order and ceded his properties in Greve to the Monastery of San Salvi. The consolidation of the village took place during the Middle Ages under the jurisdiction of the city of Florence, as Greve was a small area of its territory called "Agro di Florentia”. The village of Greve developed greatly in the following years, growing as a market place for the fortified villages, castles and farm houses on the surrounding hilltops in the 13th century. The growth of the settlement was largely conditioned by its strategic positioning at the crossroads of major roads for trades and passages: the via Chiantigiana, and "Via Volterrana" that connected the village to the city of Florence and the  other river markets of the Valdarno, favouring their intercommunication and bringing much trade and business to the area. Although it was burned to the ground by Castruccio Castracani, the Duke of Lucca in 1325, Greve  developed considerably during the 14th and 15th centuries, becoming a very populated and developed trade area, with numerous Parishes, churches and castles, residences and farms owned by the Florentines at the time. At the end of the 14th century Greve in Chianti produced an excellent wine that was highly appreciated by the feudal noble families coming from Siena and Florence. These were the ones who contributed to the economic development of the village with their huge investments and even with their direct participation in the local economy, particularly two close feudal manors, Monteficalle and Montegonzi. By the 15th century Greve’s characteristic piazza had emerged, surrounded by houses and shops of different artisans and tradesmen and lined by porticoes, acting as a large market and trade place. In the 16th century the former hamlet  changed into a village known as “Mercatale a Greve” (Greve’s Market). In the second half of the 16th century Greve in Chianti had already a busy weekly market. Throughout the 17th and 18th centuries, Greve in Chianti  registered a considerable economic growth so that it became one of the most important towns of the surroundings. At the beginning of the 18th century, Greve in Chianti was controlled by Lorena's Dukes, who promoted an additional development of the agricultural production, facilitating the prosperity of the territory. At the beginning of the 19th century the territory of Greve in Chianti was invaded by the French troops leaded by Napoleone Bonaparte, who made their stop in the town until 1814, the year when the Treaty of Vienna consigned the town to the Tuscan Grand Dukedom. In 1861 Greve in Chianti was included in the Reign of Italy by the King Vittorio Emanuele II of Savoia. After the unification of Italy, it became one of the most important centres of Chianti.
It is worth mentioning that two of the greatest Italian navigators have their origins in Greve de Chianti, specifically Giovanni da Verrazzano, who discovered the river Hudson where New York rises nowadays, and Amerigo Vespucci who gave the name to the whole American continent.

Major attractions in Greve in Chianti

With a population of little over 12,000 inhabitants and a surface of 169,12 square kilometers, Greve in Chianti is a small charming town situated in the valley of the Greve torrent. Greve is a “Città slow” member, created in 1999, which has as main goal the maintenance of the quality of life in Italian towns. The local economy is based on wine, olive oil production; the activity of numerous cement factories; wood, tanner and food industries as well as traditional craft workshops that still use secular-old craft techniques such as the artisan manufacture of the wrought iron, the embroidery. There is not that much to do here, yet you are guaranteed to experience local life and escape tourist crowds. Greve looks quite modern, although some edifices here testify the medieval origin of the place and the different historic influences. Greve has an attractive medieval piazza with several ceramics, wine and souvenir shops, along with great restaurants, perfect to enjoy delicious Italian specialities and shopping; within a little distance, only a few minutes away from the main piazza, a Coop supermarket can be found. Also on the main square, the Town Hall is located, built in the early 20th century in Medieval style, with the “Torso Alato“, or Winged Torso in front of it. A small museum of religious art is housed in the old monastery of San Francesco.  The Neo-Renaissance church of Santa Croce a Greve can be visited in Greve. Within close proximity, the fortified village of Montefioralle, a well-preserved medieval military centre standing on a steep hill, can be reached. The hills surrounding Greve boast wonderful holiday houses, making it a centre for farmhouse holidays in this part of Tuscany. Besides, several historical castles and castellated villas together with numerous wineries where visitors can taste wine and olive oil, are among the places to not be missed while here. Furthermore, you can head on and visit the surroundings of Greve in Chianti with its charming villages, among which Panzano with the nearby Romanesque church of San Leolino, with a five-arch 16th century portico and many important art works. There are also many castles in the surroundings of Greve –once defensive bastions, these have been recently transformed into stylish residences or famous estates – Castle of Uzzano, Castle of Vicchiomaggio, Castle of Vignamaggio, where Leonardo's famous Mona Lisa was born, and Lamole among others.
The heart and soul of Greve are represented by Piazza Matteotti, which draws numerous tourists from all over the world for years, yet it is not as crowded as the nearby cities of Florence and Siena. Piazza Matteotti is the main square of the town and used to serve once as a market and trade place. It is also the liveliest and most crowded place in the town, especially during summertime. The square architecture has been adorned at the beginning of the century with terraces supported by porticoes, with numerous shops under them, with pasticcerias, cafes, bakeries, butchers restaurants, craftsman shops and bars among others. In fact, “Macelleria Falorni” on the Piazza Giacomo Matteotti is one of oldest butcher shops in Italy. In the numerous specialty shops here, visitors can buy local products including meat, wine, olive oil and cheese. In the middle of the square there is a 13th century church and a bronze statue in remembrance of Giovanni da Verrazzano, one of the major Italian navigators and explorers of the 16th century, who discovered New York’s harbour. The fountain was built in 1913 in honour of this notorious citizen, who was born in Val di Greve in 1485. According to historical documents, the original piazza was square-shaped, but the construction of buildings, porches and loggias  invaded the place so that it is now triangular.
On one side of Piazza Matteotti, there is the Church of Santa Croce  dedicated to the Santa Croce. The church was built in the Middle Age, in the 11th century and rebuilt in the 14th century. It was later restored during the 19th century and features neoclassical elements such as the porch with two columns and three arcades. Inside, the church contains precious art works among which “La Madonna e i Santi” by Maestro di Greve, and the triptych “Annunciazione della Vergine Maria” by Bicci di Lorenzo. The church of Santa Croce also houses some beautiful paintings of the school of Fra Angelico.
In the proximity of Greve, the Oratory of San Francesco is worth visiting. The former convent was now hosting the “Museo di Arte Sacra”, which contains an important collection of paintings, sculptures, religious items, objects and furnishing. Among these, the polychrome group made in terracotta representing the Deposizione, le tre Marie and i tre Santi by Santi Buglioli can be admired.
Every year, in the middle of September, in the first week of September during the harvesting of the grapes more exactly, in the triangular Piazza Matteotti there takes place “La festa del vino”, the wine festival, the most famous festival of Greve in Chianti. This festival is important for the people who live in the area, as it is the reward for all the hard efforts they have done to produce the wine. Among the numerous celebrations that take place here, worth attending is also the "Show-market of Plants and Flowers" held every year on May 7th and 8th. During this festival, the main piazza of the town is transformed into a botanical garden where you can admire the most diverse flowers of different colors and scents, like a multicolored carpet of flowers. Also, on the first Monday after Easter and the first Monday of October a famous antique market is held in the town, for those interested in antiquities. Every Saturday morning, the typical market of the town is held, where all types of goods can be found. You can visit Greve in Chianti at almost any time of the year, yet spring and autumn are the best periods to visit the place.
Sponsored Links

Write your Review on Greve in Chianti and become the best user of Bestourism.com

Maps of Greve in Chianti 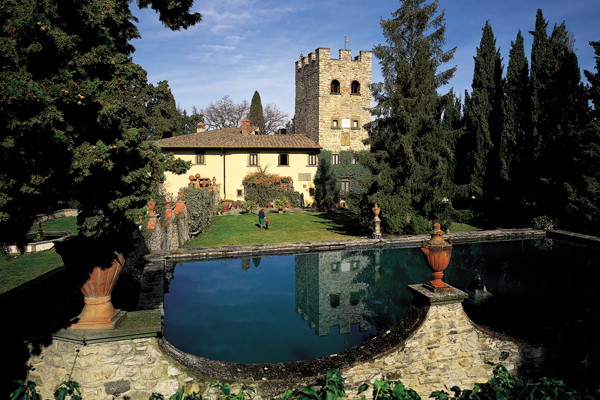 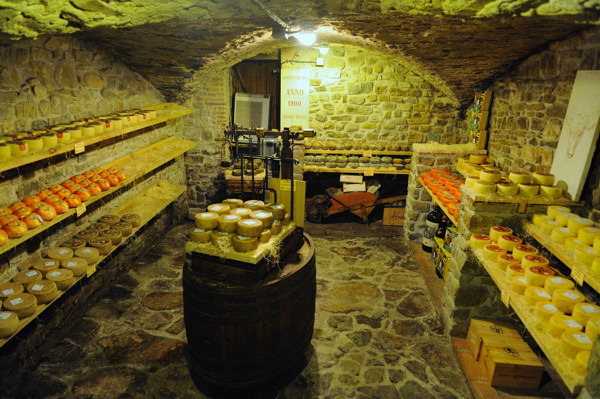 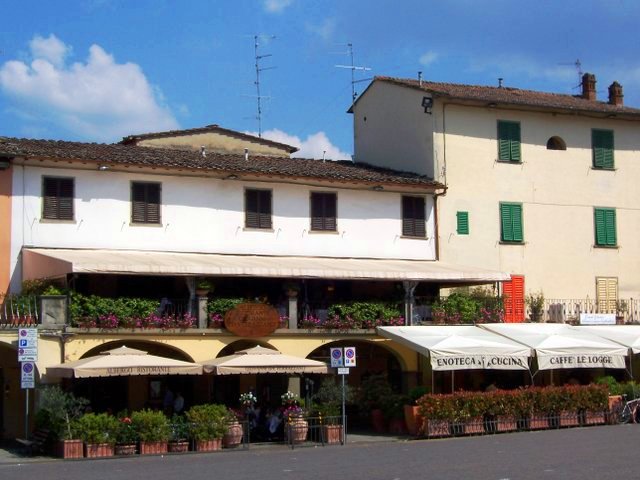 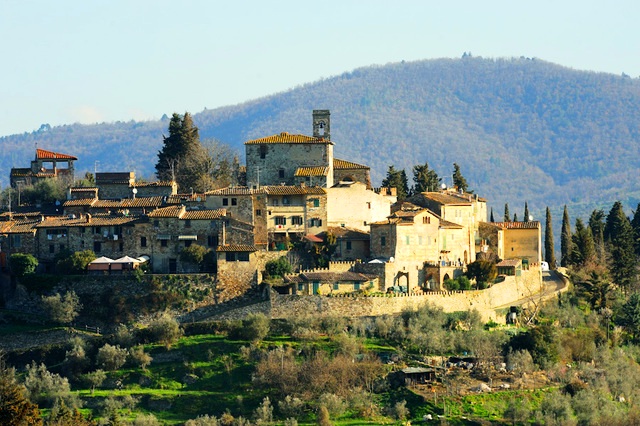 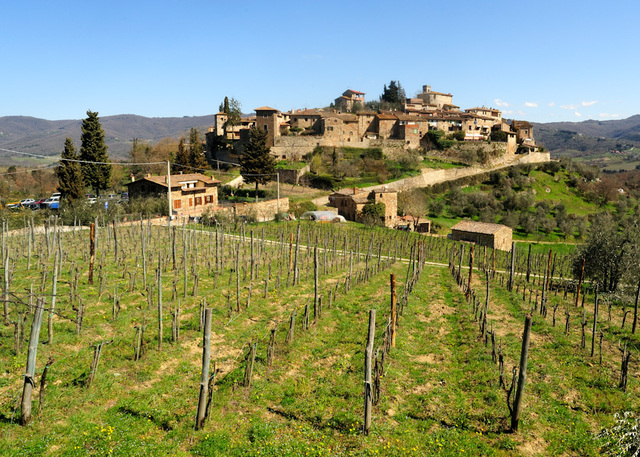 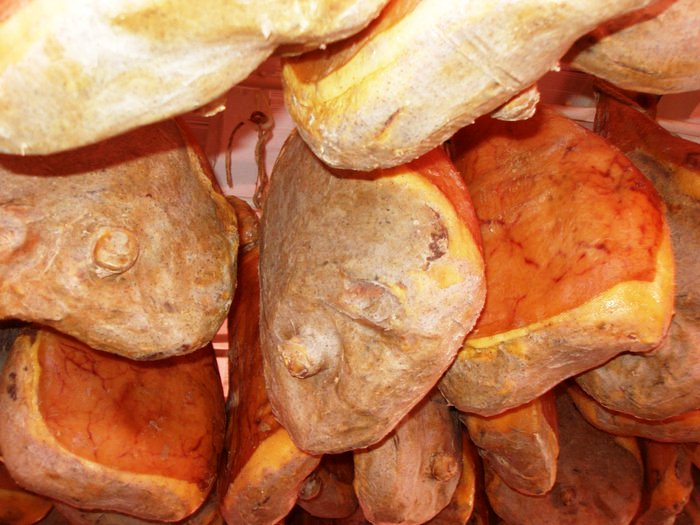 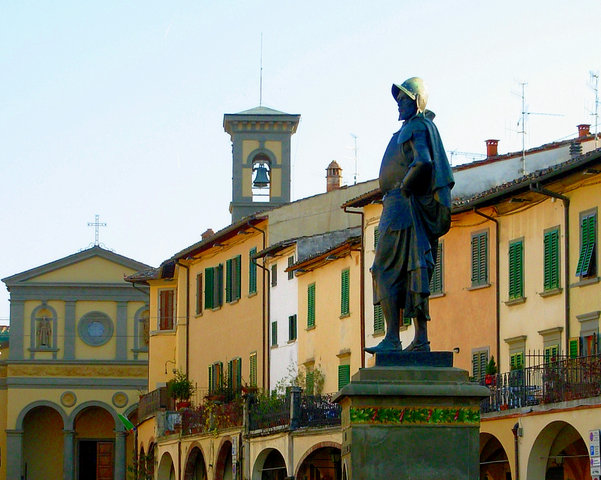 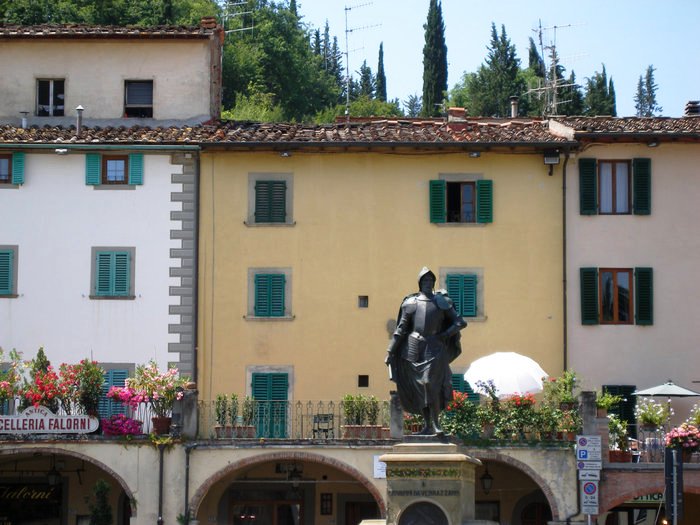 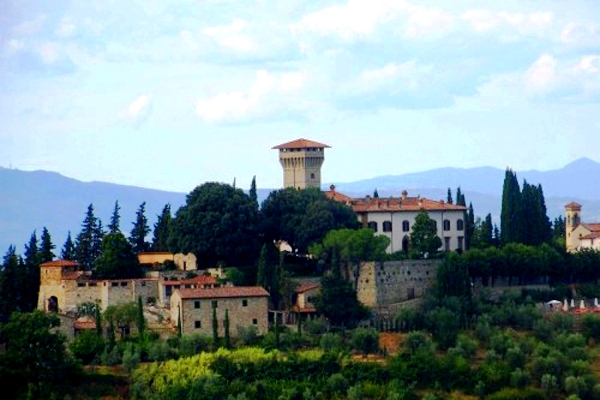 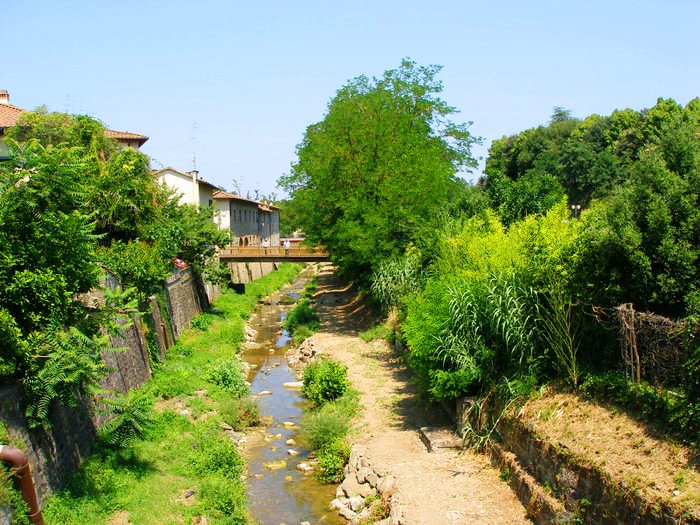 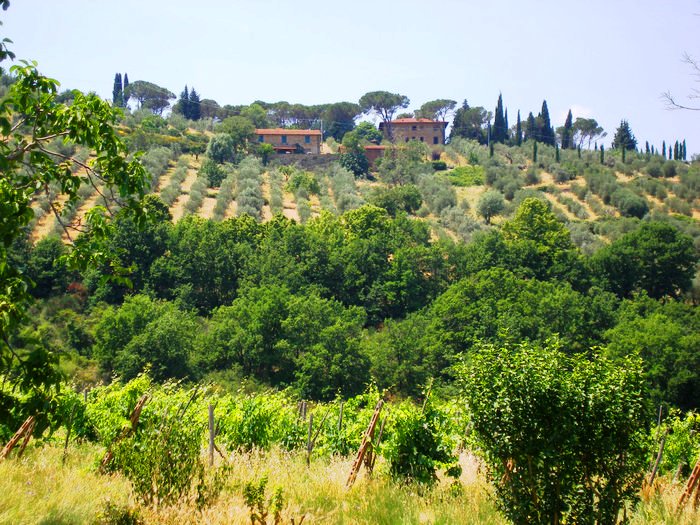 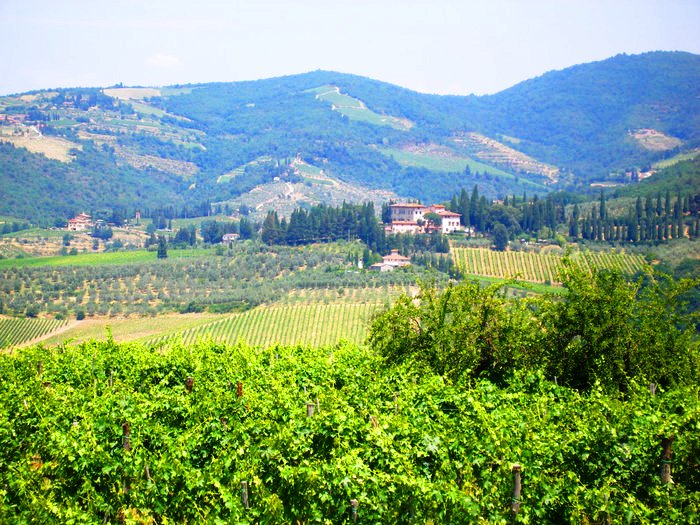 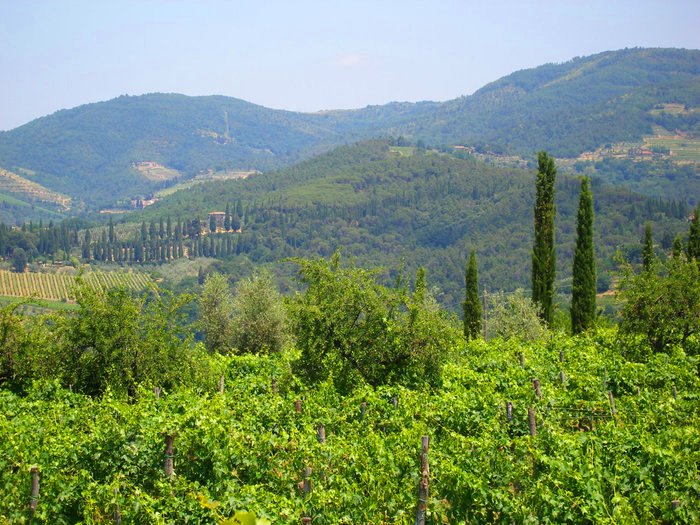 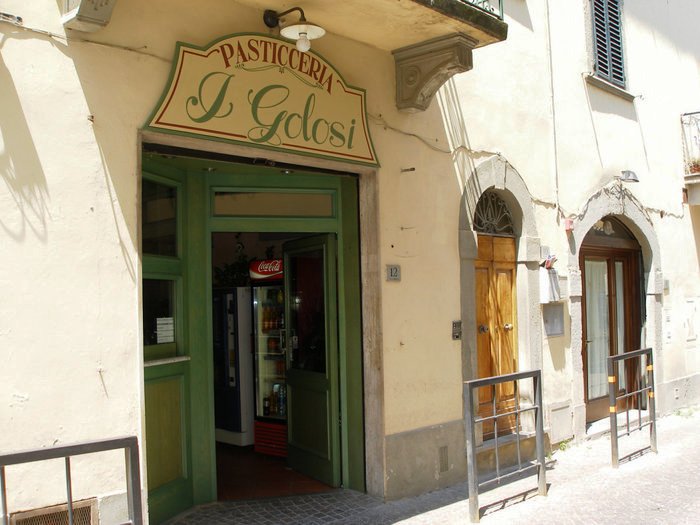 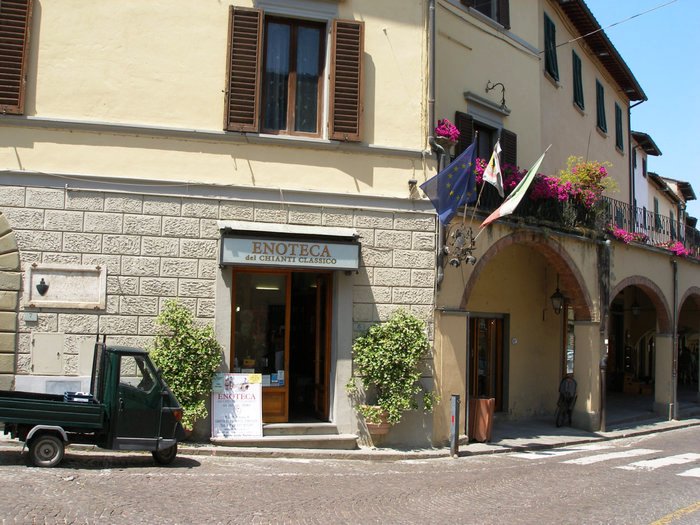 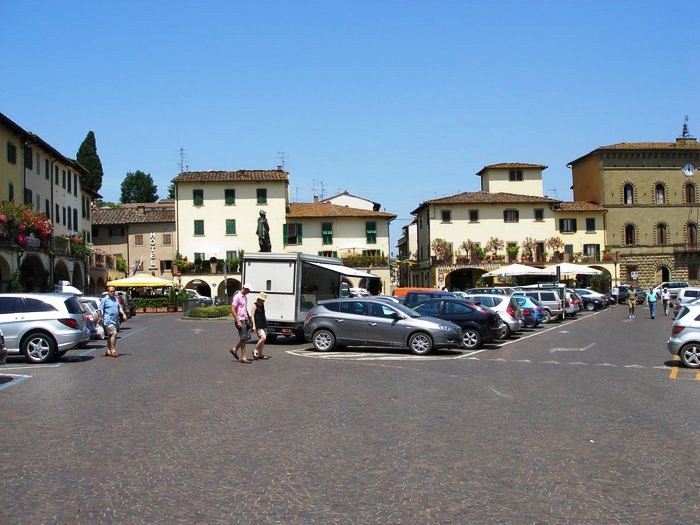 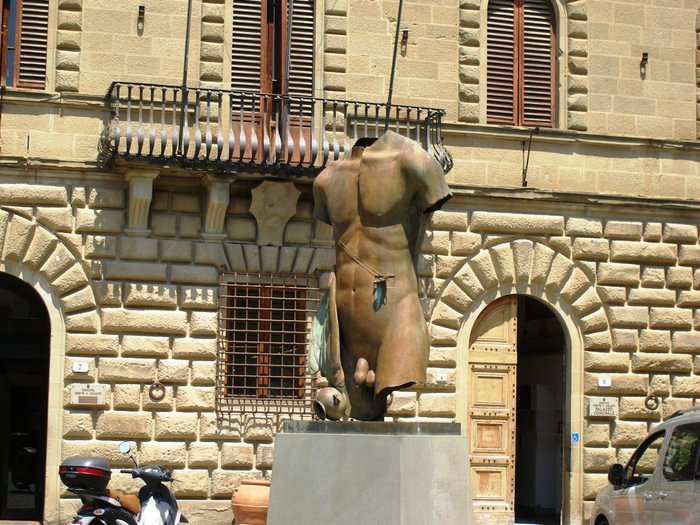 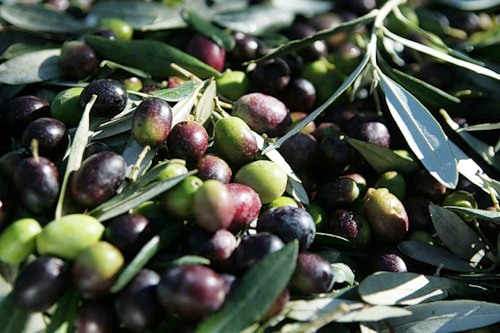 Greve in Chianti - Olives -what Chianti is famous for