Grand Central Terminal is a terminal station in New York City, between 42nd street and Park Avenue in Midtown Manhattan. Its considers to be the largest train station in the world with 44 platforms and 67 tracks along them. The terminal has been named” Grand Central Terminal” since 1913 by the name of the nearby post office, also as the name of the previous rail station that was there. Its construction  took over 10 years and were spent more then 80 million dollars.

The inside design is impressive, the zodiac signs were taken from an medieval manuscript , is painted an amazing scene with stars that look as they would be seen by  God not by man. The western staircase in Botticino marble  was designed  after the staircase from Opera Building in Paris.
The terminal has inside five great restaurants,  20 casual restaurants and over 50 unique speciality shops. It hosts large famous events in its 12,000 square foot Vanderbilt Hall. Grand Central is also the world’s largest terminal and covers 49 acres. The Park Avenue is built on its roof. You can walk in to admire its stunning brass clock, the excuisite staircase,  its light bluish-green background filled with the constellations.
Grand Central Terminal is open 7 days per week, from 5:30a.m until 2:00a.m,  the shops and restaurants  at this terminal are open daily,  but the retail stores are open from 8a.m to 8p.m during the weekday. It is visited by the more then 5 hundred thousand people everyday, and it is estimated as the busiest railway station in the world.  So it worth to take such a pleasant trip in such a famous and big railway station.
Sponsored Links

Write your Review on Grand Central Terminal and become the best user of Bestourism.com 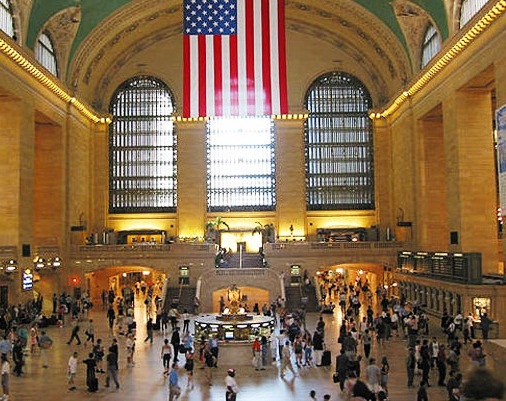