Destinations / The best places to visit in New York, USA / The Fifth Avenue

Fifth Avenue crosses  Midtown Manhattan between 49th street and 60th street ,  is lined with prestigious shops that considers to be the most expensive shopping streets in the world. Fifth Avenue is an traditional route for several parades  in New York City, and the longest one is St.Patrick’s parade.
On Fifth Avenue there are enough over-the –top shopping areas to satisfy everyboby’s taste. You can spend your time browsing in the stores as: Gucci, Armani, Dolce&Gabana, Prada, Versace, Louis Vuitton, H&M, Bergdorf-Goodman and many other .Your eyes will be delighted by the shops like:  Bulgari, Tiffany’s,  Cartier,  Fendi, Christian Dior, Kenneth Cole.
Fifth Avenue is not just a shopping area, its borders with Central park and the street become more residential. A lot of historical building, old churches and museums will wait for you with curiosity. During the 19th and 20th century many rich people built there huge mansions with the view at Central Park and many of those fabulous buildings  now serve as home for the museums. For example Museum Of New York City is housed in a exceptional residence, since 1932. You can also visit Metropolitan Museum that is the  largest museum in the world. Your attention will be captured by The museum of New York City and Guggenheim Museum which is famous for its 20th century modern art that you can admire inside.
A spectacular art that wil delight your eyes is the Hotel Plaza a timeless landmark that keeps memories since 1907. Plaza is a very famous hotel on Fifth Avenue which boasts the most large square footage of any luxury hotel in New York City.
The Fifth Avenue is the symbol of the city which can be reminded by every tourist as the most popular avenue in the world. Not only the most famous and luxurious  shops and boutiques will amaze you but the grand churches and sacred cathedrals will be unforgettable.
Sponsored Links

Write your Review on The Fifth Avenue and become the best user of Bestourism.com

Maps of The Fifth Avenue 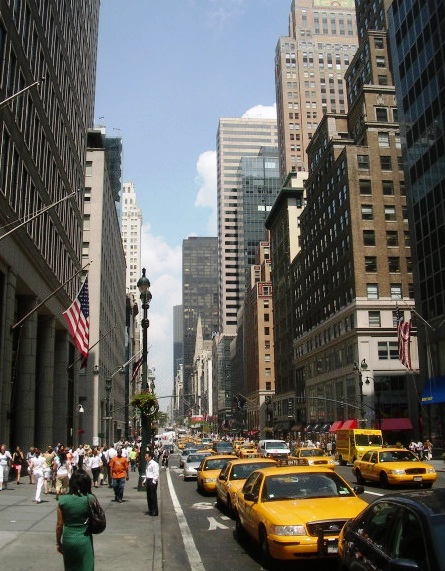