Destinations / The best places to visit in New York, USA / The Statue of Liberty

The Statue of Liberty


The Statue  of Liberty –a huge sculpture situated on the Liberty Island in New York.  It was designed by Frederick-Auguste Berthold. The Statue’s framework was made by a french engineer Gustave Eiffel, also known as the man behind the Eiffel Tower in Paris. Due to an ingenious construction  consisting from copper plates,  attached to the metal framework , the statue is very  heavy and   stands easily in front of the storms.

This giant sculpture was initially made in Paris,  it took nine years before it was completed in 1884,  then offered as a gift to United States on 4th of July in  1886 when they turned 100 years from Independence.
The stone that is based the sculpture comes from a  small village in France,  which was chosen because is less corrosive to the action of salt water. The statue represents a women: “Goddess of the Liberty”,  covered with a flag that has in the right hand a torch with a golden flame and in the left hand a book where is graved  „The United States Independence Day”:  4th of July 1776. Those 7 arms of the crown symbolise the 7 continents,  and the base ot the statue its has a star form, made of stone. Inside the base it is The Immigration Museum.
The statue has a height of 46 metres and with the base has 93 metres,and a weight of about 205 tons,   so you can see it from a very long distance.  It considers  the most famous symbol of liberty in the world and is the most popular touristic  attraction in New York City. It is the first  place to visit  for the emmigrants  that come here very often. The Statue of Liberty became the emblem of United States and one of the most popular symbols of freedom and democracy.
Sponsored Links

Write your Review on The Statue of Liberty and become the best user of Bestourism.com

Maps of The Statue of Liberty 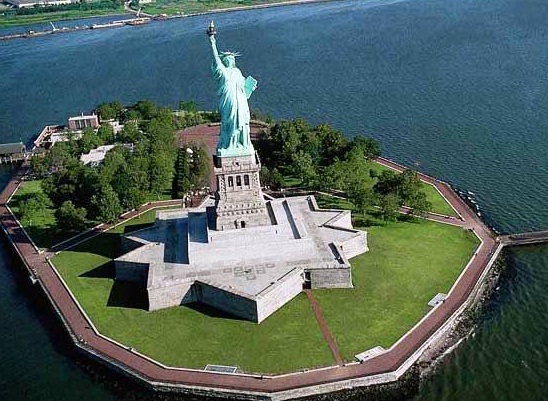 The Statue of Liberty - Overview