Destinations / The most beautiful churches of Italy / Basilica of St. John Lateran


The Papal Archbasilica of St. John Laterano or Arcibasilica Papale di San Giovanni in Laterano in Italian is the cathedral of the Church of Rome and the official ecclesiastical seat of the Bishop of Rome, who is the Pope. It is the oldest and ranks first among the four Papal Basilicas or major basilicas of Rome. It has the title of ecumenical mother church -mother church of the whole inhabited world -among Roman Catholics; this means that in the Catholic hierarchy, this church is above all the other churches of the world, including St. Peter's Basilica in the Vatican, as evidenced by the inscription over the entrance. For that reason, unlike all other Roman Basilicas, it holds the title of Archbasilica.

Basilica is built on the site of the Lateran Palace from early Roman empire. The Palace Square keeps an obelisk built by Pharaoh Tuthmosis III in Karnak, that would be later placed in the "Circus Maximus" and later be brought here.
Official blessing of the church and its annexes was presided by Pope Sylvester I in 324, declaring it as God's Dome. Inside there was placed the papal seat, making it the cathedral of Rome. On the central door is written: Lateran, the holiest church among all churches of the city and the world, the mother and their head. Pope Sergius III dedicated them to Saint John the Baptist in the tenth century, when blessing the new baptistery of the basilica. Pope Lucius II will dedicate it to St. John the Evangelist in the twelfth century. Thus, these two saints are seen as co-protectors of the basilica, Christ himself being the first.
All popes have occupied the papal seat in Lateran since the papal Miltiade until the reign of Pope Clement V French, who decided to transfer in 1309 the official seat of the Catholic Church in Avignon. During the Vicariate of Avignon, the palace and basilica went into a decline. Two devastating fires swept Lateran - one in 1307 and another in 1361. In both cases, the Avignon popes have sent funds for necessary repairs. Lateran will lose its initial brightness.
Pope Sixtus V removed the original palace, as well as the basilica, ordering their replacement. Rebuilding the Palace and the Basilica became two separate things. Today, the Lateran museum is the location of the Pontifical museum. The obelisk of red granite in front of the palace is the largest in the world. It was built by Thutmose III in Karnak. It was moved by Constantine II in 357 and placed  in Circus Maximus. Sixtus V set it in the curent place in 1587. Lateran Palace served as a meeting place for many councils.
There were several attempts of reconstruction of the basilica before Pope Sixtus V Sixtus hired his favorite architect - Domenico Fontana - to review the project. A further renovation took place under Francesco Borromini, employed by Pope Innocent X. The twelve niches created by him will be filled only in 1718 with the statues of the Apostles.
Pope Clement XII planned an ambitious reconstruction: he has made a project contest about the rise of the facade. There were selected over 23 architects, among which the one that distinguished mostly is Alessandro Galilei. Current facade dates from 1753. Galilei's facade has replaced all the original ancient details of the basilica, imposing a noe-classical style.
The Holy Steps represent steps or a series of white marble steps framing wooden steps. According to the Catholic tradition, the wooden stairs leaded to praetorium of Pilate in Jerusalem. The original wooden stairs can be seen through small holes in white marble. They were brought from Jerusalem in the fourth century by Saint Helena, mother of Constantine.
In the basilica there are the tombs of six Popes: Alexander III, Sergius IV, Clement XIII, Martin V, Innocent III and Leo XIII.
Sponsored Links

Write your Review on Basilica of St. John Lateran and become the best user of Bestourism.com 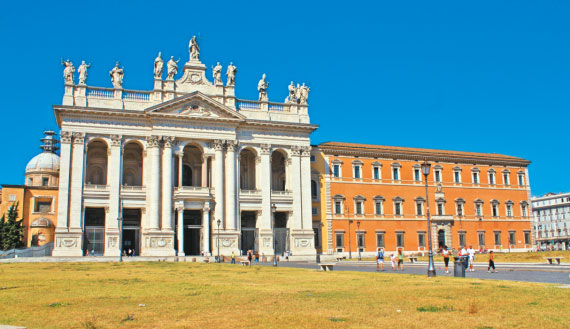 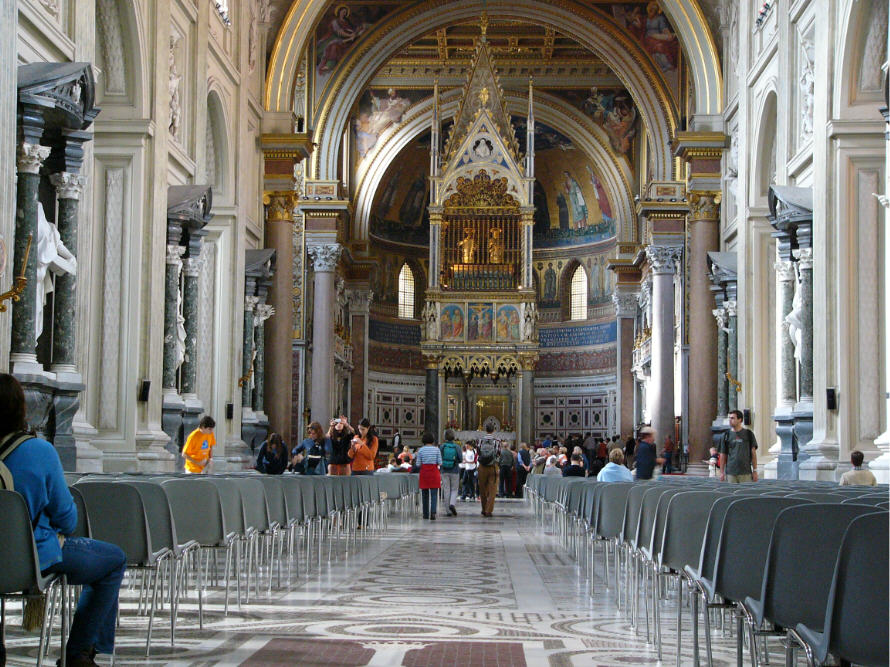 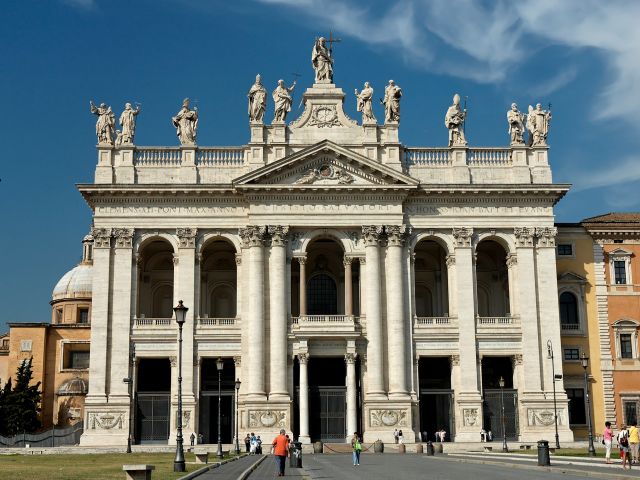 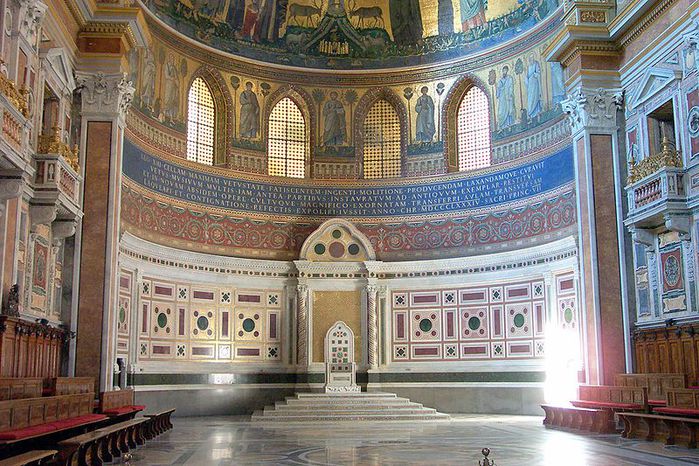 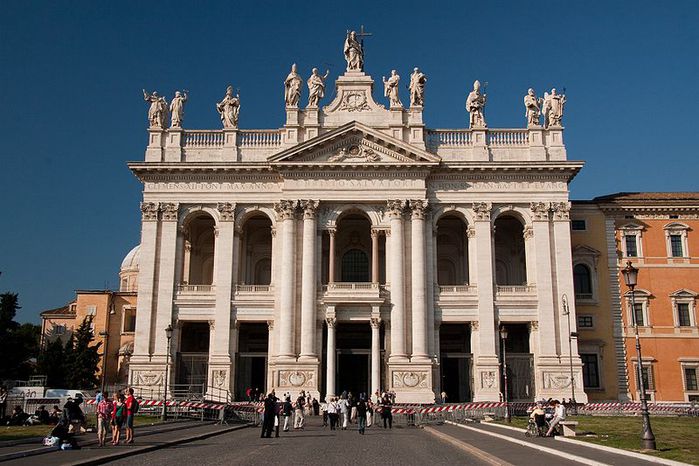 Basilica of St. John Lateran - Facade of the Basilica 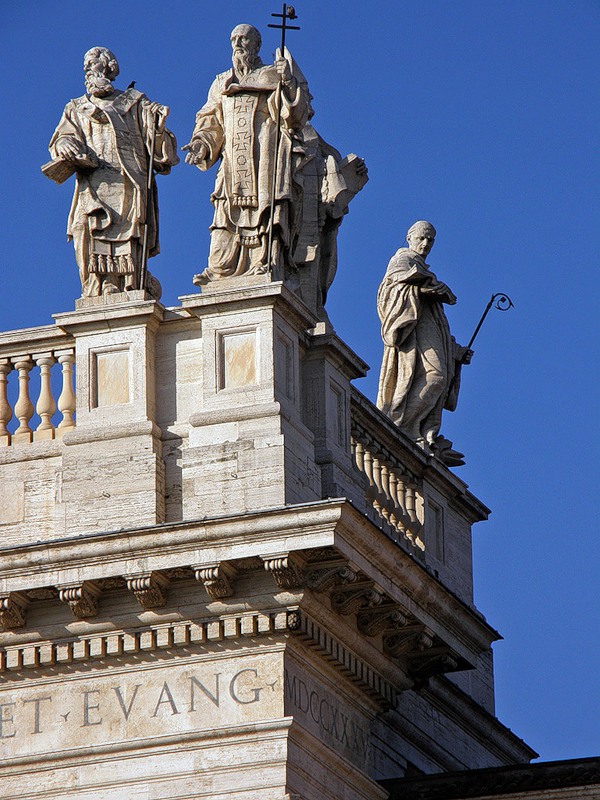