Castles / The most beautiful castles in Tuscany / Montalcino castle


Montalcino is situated in the heart of southern Tuscany. In the Middle Ages the Montalcino territory was divided among four ecclesiastical: Arezzo, Chiusi, Grosseto and Siena. This subdivision reflects that of antiquity, because here they met the territories of the major lucumonies Etruscan Arezzo, Chiusi, Roselle (Grosseto) and perhaps also of Volterra. Many relics of this era are still preserved in the Archaeological Museum of Montalcino.

The medieval history of the region has many obscure points, as all related documentation was kept in the archives of the Abbey of Saint Antimo destroyed, hence the castle itself depended. The fact that the Francigena pass east of the village, at today's scales Torrenieri not helped us to find historical antecedents to the second half of 1100.
A port city joined to the walls of the castle tower at St. John.
News from the end of the twelfth century, with Montalcino autonomous communities of Siena during the war, lost, against Florence in 1176. Montalcino soon found himself having to counter the expansionist ambitions of Siena and the alliance was broken, even in 1200 the castle was destroyed by the Sienese momentary truce with the Florentine, also pledged to remove the obstacle created similar by Semifonte. The resumption of war with Florence, Siena prevented the complete conquest of Montalcino. The castle was still under the protection of the Church and the City of Siena. After a failed attempt to win back their independence, in 1232 the castle was reoccupied and forced to a new alliance with Siena. After yet another rebellion, the castle was again conquered by the Sienese in 1252 but soon lost thanks to Florence and Grosseto. In the Montaperti Montalcino had sided with Florence against Siena and the victory that did nothing but lead to a new loss of autonomy. In 1269 Siena was again defeated in Colle, Montalcino and free again. Only after the mid-fourteenth century Montalcino came under the control of Siena. At this time the construction of the fortress with a view to control the city center.
Montalcino, Siena and was now in the fifteenth century became one of the most important territory of the Republic. In the following century the city and the castle withstood the siege of the imperial army and the Medici in 1553 during the war that led to the final capitulation of Siena in 1555. After the surrender reached Senesi Montalcino where many citizens, led by Piero Strozzi, revived the Republic in exile. The city became the capital of the territories have not yet conquered by the Florentines and stood until 1559 when, now isolated from the fall of Telamon and Castiglione della Pescaia, was offered the yield and sworn allegiance to Cosimo de 'Medici.
The castle is still intact. As said its construction was begun in 1361 on the summit of southern preesitenti city walls in 1200, incorporating the tower of St. Martin, St. John the tower. The look and the classic castle-pentagonal enclosure with towers at every corner. The tower is flanked by south-east deck. The walls and towers are equipped with projecting outer wall walk, supported by arches, corbels inverted pyramid, is still entirely feasible. The north tower is open on the inside. The castle also incorporated an ancient basilica with three naves, then reduced to a chapel to serve as a fortification, of which the remains are still visible at the north-east tower. On the south lies the mighty bastion Medici, Cosimo added by mid-1500.
Sponsored Links

Write your Review on Montalcino castle and become the best user of Bestourism.com 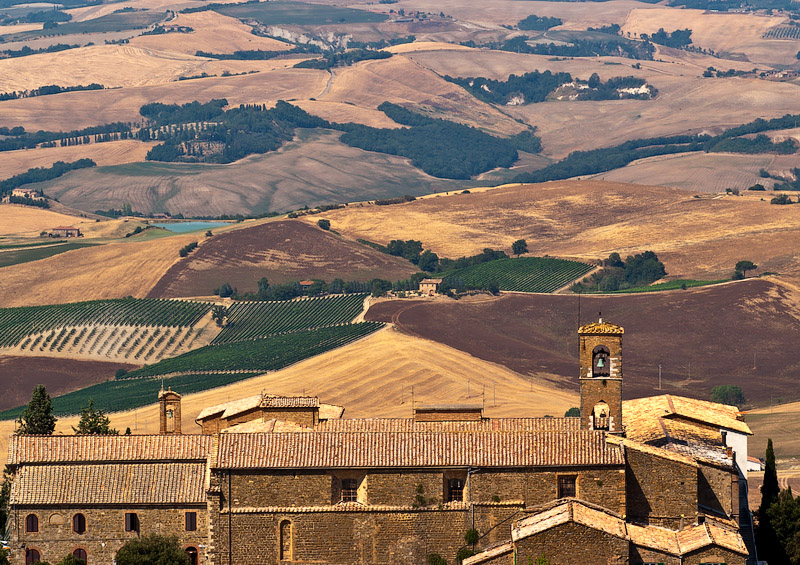 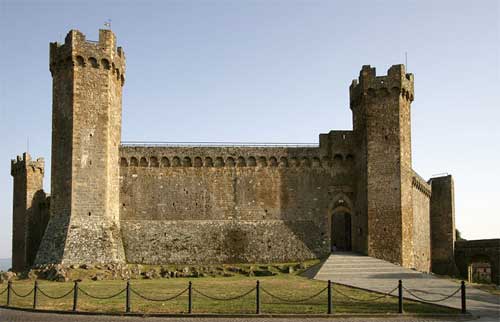 Montalcino castle - View of the castle