Destinations / Places NOT to visit before you die / A Buzkashi Match


Famous due to the movie Rambo 3, Buzkashi is a very tough sport, apparently bloody, with a home for thousands of years lost lands of Central Asia. Buzkashi seems a brutal combination between horse polo and rugby which uses a headless goat instead of the ball. This secular tradition is not inevitable but the spirit of fair play, as young people discover more and more Afghans are returning to ancient traditions banned by the Taliban regime.

Although secular age of the sport horse Buzkashi first documentary mention came from a 13th-century writing stating that the Mongol horde led by Genghis Khan often played Buzkashi. The term translates directly as "catch the goat, and draws its origins in the tradition of hunting wild goats hunted by horseback warriors. Today, the tradition has not changed at all except carcasses of goats and sheep belonging to livestock.
The game is grabbed a goat carcass of 70 kg of mid-heavy field of play and to cross her land owned by the opposing team to win the game. Although it seems simple at first glance, the game is extremely violent and dangerous because it effects the team riders are allowed to do anything to deprive his opponents. To this end can be hit with fists and feet, pushed, pulled the horse, just hit with the whip. Opposing players are allowed to hit your horse. End of each day clashes with plucked teeth, swollen eyes, lips and broken noses and various fractures. Instead, any rider fell from his horse will never be hit. The game has a simpler version called Tudabarai, where the aim is to take cover and run with it in any direction. Last version of Buzkashi, Qajar redoubtable, but require a perfect physical condition, because the horse must cross the portion of land occupied by the opposing team. Buzkashi is very popular in Kazakhstan, Turkmenistan, Uzbekistan, Afghanistan and Tajikistan.
Sponsored Links

Write your Review on A Buzkashi Match and become the best user of Bestourism.com

Others Places NOT to visit before you die .

Maps of A Buzkashi Match

Others from Places NOT to visit before you die

Places not to visit before you die 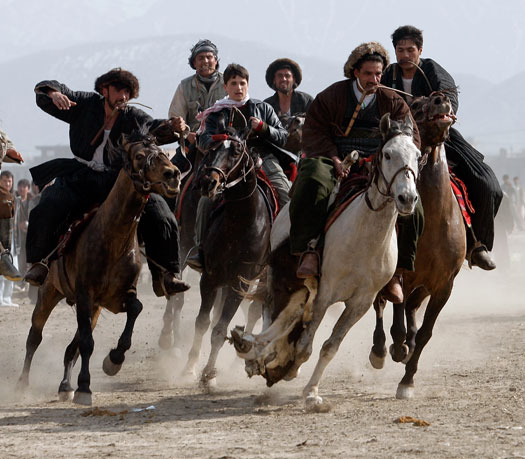 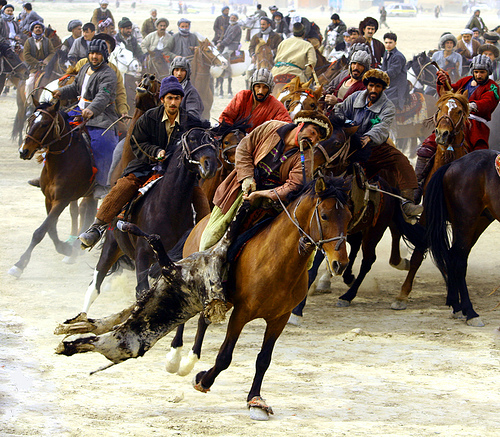